We’re almost halfway through the year, which means we’re almost an eighth of the way through Donald Trump’s first (and last? probably?) term, unless he gets impeached and Mike Pence ends up running the country. And even though it feels like he’s been the absolute worst (he has), we’ll outlast him. 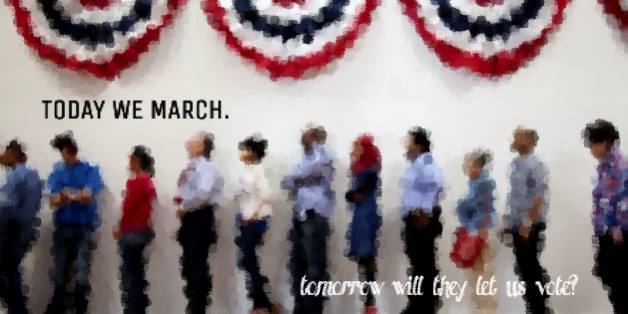 New York’s antiquated voting laws disenfranchise thousands of people (remember how early you had to register to be able to vote in the mayoral elections?) This panel, organized by the Brooklyn Voters Alliance, focuses on what needs to change for New Yorkers to finally have fair elections. Speakers include Zachary Roth, author of The Great Suppression; Damon Daniels from Demos; Jule Ebenstein from the ACLU’s Voting Rights Project; James Hong of the MinKwon Center for Community Action; Susan Lerner from Common Cause; and Esmeralda Simmons of the Center for Law and Social Justice, Medgar Evers College. There will also be a voter registration drive starting at 6pm.

Protests don’t happen spontaneously: they need to be organized. This planning meeting for the upcoming Brooklyn-wide march against gentrification, racism, and police brutality is a great way to get organized beyond going to a march.

Pairs N Pears is a monthly variety show featuring pairs of different artists, including singers, poets, performance artists, and more. The proceeds are always donated to a pair of organizations: this month, it’s the New York Anti-Violence Project and the Hetrick-Martin Institute. This month’s lineup includes comedy by Jes Tom and Lauren Clark, Dance by Mineko Kanani Shannon and Kareem Woods, and drag by Lady Bedbug and Wo Chan. There will also be pears!

The New York Health Act isn’t perfect, but it’s better than the disaster that is the American Health Care Act. That said, protesters are gathering outside Senator Golden’s office to demand that he use his position on the New York Health Committee to release the bill from the committee to a floor vote before the legislative session ends. You can take a look at the bill here.

The Democratic Socialists of America’s Brooklyn branch is having their monthly meeting this week, where they’ll discuss whether they’ll be endorsing Jabri Brisport for City Council and if the organization should split into smaller, neighborhood branches. Childcare will be provided to those who contact [email protected] before the meeting!

Lies, or alternative facts or whatever you want to call them, are part of the reason we got into this mess. (there are lots of other reasons, but misinformation is one of them!) Protesters will be marching down Broadway from Foley Square demanding honesty and transparency from our leaders. Speakers include Congresswoman Nydia Velazquez, Congressman Jerry Nadler, Common Cause Executive Director Susan Lerner, author Timothy Snyder, and Rosie O’Donnell (who the president hates).

Learn about the East New York rezoning plan, how it affects you, and the proposed projects at Arlington Village and Broadway Junction at this event. 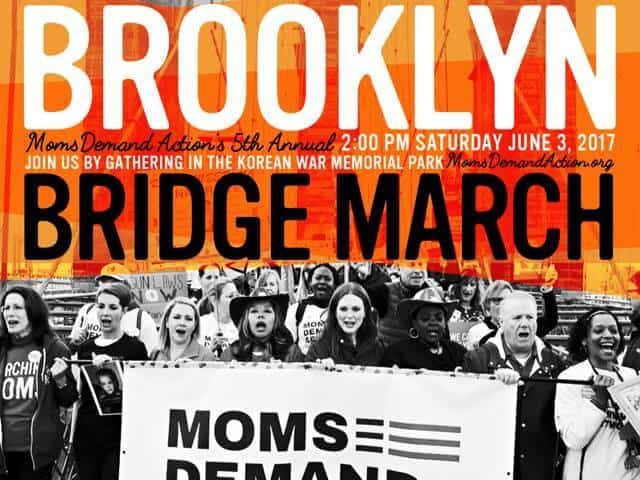 Everytown’s fifth annual march against gun violence is kicking off in Cadman Plaza. From there, protesters will march across the Brooklyn Bridge at 3pm and rally at Foley Square in Manhattan around 4. They’re asking all protesters to wear orange! 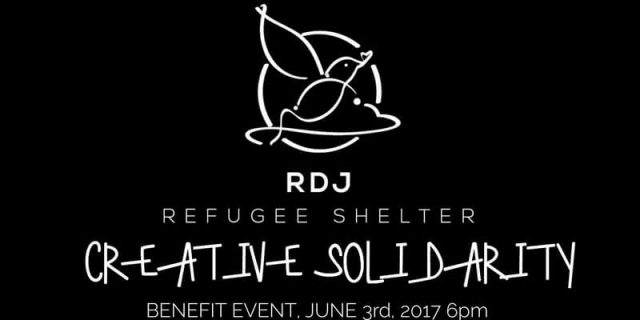 This party benefits the only shelter in NYC that’s specifically for homeless asylum seekers and refugees. The night will be full of food, art, drinks, performance, and more. Performance artist Georgia Lale will feature photographs from her performance project #OrangeVest, as well as music by Koyt Far Dayn Fardakht, Claudio Montouri, and 81ack 8astards. Donations are suggested but no one will be turned away for lack of funds.

Activists will be writing in these fill-in-the-blank stickers, leaving messages they think white people should hear while having a discussion about whiteness and race. They’ll leave the stickers all over the city, so your message can be heard while you stay anonymous. 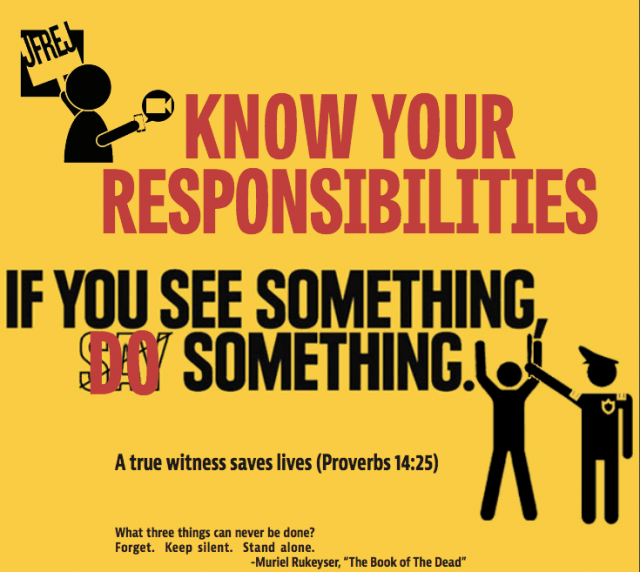 Jews for Economic and Racial Justice is having a copwatch training workshop, where you’ll learn how to observe, record, and intervene when people are stopped by the police, as well as how and when to offer support to the person who gets stopped. The event is free but capped at 30 attendees, so be sure to RSVP. Snacks will be provided!

Rediscovering the Radical Queer Past: a discussion of Liberation and Solidarity in the Gay and Lesbian Left
Interference Archive
131 8th St. No. 4, Gowanus
5pm – 6:30pm
FREE

Emily K. Hobson is discussing her book, Lavender and Red: Liberation and Solidarity in the Gay and Lesbian Left at Interference Archive this weekend. The discussion will center on LGBT activism and anti-capitalist queer radical social movements.

Copwatch is a way of monitoring police misconduct and unprofessional behavior and empowering communities. This workshop, led by comedian and activist Elsa Waithe, will teach you what to do and how to intervene when you see police abusing their powers. A donation is suggested, but no one will be turned away for lack of funds.