Anything out of the ordinary happen during your Thanksgiving? Yeah, ours was pretty normal too. One reader of the site though, claims he had the weirdest Thanksgiving of them all, coming across one of New York City’s fabled sewer alligators swimming around the East River, just outside of East River State Park. These photos of an alleged East River alligator that we’ve named Noam Chomsky on account of all his teeth were sent to Brokelyn by a reader this morning. Is this finally proof that the famous NYC urban legend about alligators living in the sewers is real?

His story is as follows:

First place I thought yo send this crazy story. We all know there’s gators in the sewers but I never seen one till yesterday. Took my daughter down to East River State park last night while at Grandma’s for Thanksgiving and she said there was a gator in the water but I didn’t believe her … sure enough there was. Took a couple photos then he went underwater … saw him pop up down by some abandoned petroleum place up river 30 yards or so. Must be coming out of a storm drain looking for food. Talked to some lady walking her dog said she’d seen it before. Gotta love it around here always surprises for ya.

He also sent a second picture, giving Noam a close up. 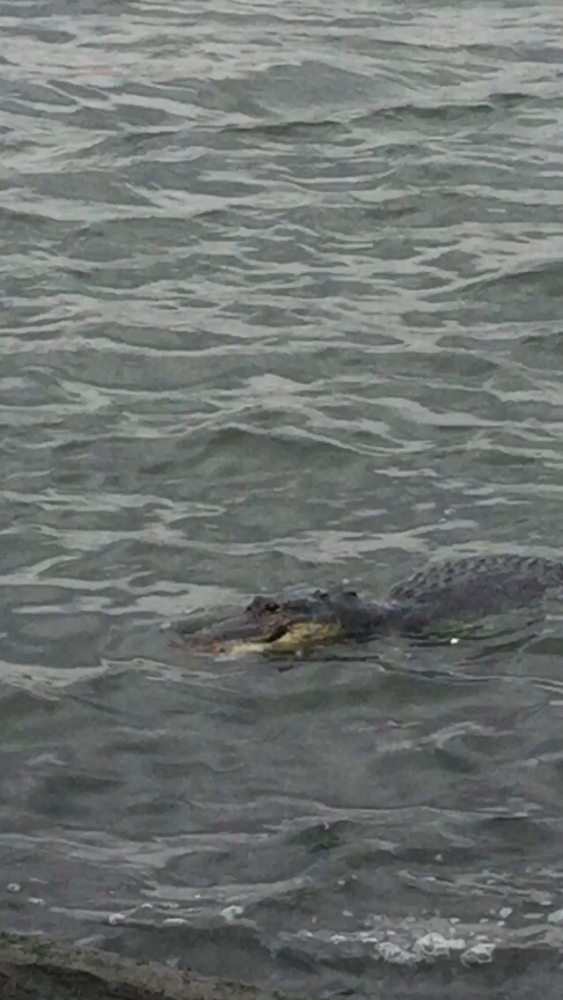 Is Noam real, and living in NYC’s sewers? Probably not, but it’s nice to imagine. If a whale and a dolphin can wash up in Gowanus, why can’t a gator suddenly show up in the East River? You’d think that a gator in the East River was as common a sight as the woman walking her dog said it was, someone would have mentioned an East River gator before. Instead all we’ve got are old instances of gator parts strewn around Williamsburg and one aggregated New York Times story about a tiny gator being found under a car in Queens, with no indication it came from the sewer. On the other hand, the pictures’ GPS data suggest they were taken at the East River State Park, faking the metadata is really going the extra mile for a Photoshopped prank, and according to the gator facts on Wikipedia, alligators can live in brackish water and can survive in water that’s just 45 degrees Fahrenheit.

The obvious parallel to these pictures are the three-eyed catfish of the Gowanus, a story that was debunked by the Times after being re-reported without question in a number of other outlets. Of course, the prankster who made the video never came forward, leaving a weird air of mystery around the hoax. And now just a couple weeks later, another AOL email address surfaces with pictures of too crazy to be believed NYC wildlife pictures. Why?

It seems strange to pull off your hoax and then not come forward to claim your reward and you brief profile as the human who spread a fake viral story. Unless of course they’re playing the long game, seeding story after story around the internet in some demonic attempt to define and then unmake everyone’s reality in one swift blow. Which is rude.