One of the singular phenomena of the modern age has been the exponential growth of the freelance workforce. Over the past decade they’ve come to command the vote, dominate the cultural narrative, and are now having a bigger effect on the city’s physical landscape than ever. Art studios are losing their spaces to co-working complexes as the sliver of NYC’s work-from-home professional pie grows ever larger. Coffee shops are becoming library-like spaces full of glowing Macs. And now, there’s even a new app called Workfrom that’ll show you “the best places in the city” where you can work remotely. Oh, and it also gives you all their wifi passwords.

Workfrom is a directory of coffee shops, co-working spaces, public library branches and the occasional Whole Foods. The directory includes places like the Greene Grape Annex in Fort Greene which, as you may know, doesn’t exactly like you treating them as your personal workspace. No coffee shop does, frankly, nor should they.

It only takes talking to a barista or two in order to understand why BK coffee shops don’t want to be filled with tappity-tapping freelancers all day long. Some shops — including Greene Grape Annex — have even started to limit their wifi access so they can at least enjoy business turnover, if not genuine human interaction in their establishment.

When we first made our exhaustive list of BK co-working spaces, we never thought coffee shop culture would land here, quiet rooms of hushed voices and “what’s the wifi” customers. Workfrom caters to these very customers. The app, which launched last week on Itunes and Google Play, goes beyond basic coffee shop campout etiquette into territory that feels like an affront to the already volatile state of New York’s dwindling café culture.

Workfrom compiles listings much the same way Yelp does, except that instead of the business itself adding a profile, a Workfrom “scout” does. (Anyone can be a scout; if you stumble upon a spot with good wifi access, you can just add it to the Workfrom directory.)

The app gives you more than Yelp’s basic “Has Wifi” confirmation (which often turns out to be false or partially true, anyway). It offers information about wifi passwords and speeds, background noise, access to power outlets and pro tips, then ties it neatly together with an overall work-friendly capacity score. Users can review their remote working experiences at these spaces as a means of inviting — or warding off — other freelancers.

While the app is useful as an aggregator for spaces with internet access, it’s a little weirdly set up. Some coffee shops are listed as “closed” when they aren’t, and co-working spaces are included in a map search without any indication that you have to be a member or purchase a day pass in order to work there. Seeing as the app just launched last week, they’re probably still working these kinks out.

People seem to be gung-ho about it, all the same:

Would have come in handy the last 6 yrs of my life: Workfrom: Discover the best places to work remotely @ProductHunt https://t.co/4iY4MiIuzp

Just discovered the @workfrom community. This is exactly what I’ve been looking for!

Even in its nascence, Workfrom has already launched in multiple cities— Tel Aviv, London, Madrid and Toronto among them. Apparently, they’ve got a reach of 1,200 cities and counting (which presumably just means that 1,200 cities have at least one scout in them).

Am I the only one bothered by the existence of an app that makes the worst thing about remote work culture more accessible? The idea that you can join Workfrom’s team of “scouts” to find coffee shops where you can work in your area smacks of a real estate brokerage. By giving away the wifi passwords to these spaces, Workfrom eliminates one of the few remaining excuses you have to engage in human conversation at a coffee shop. If the app poured your coffee, too, you’d never have to speak to anyone again.

Plus, why would anyone want to give away their wifi secrets? IMO if you find a neat space to work where there’s a tranquil buzz of caffeinated conversation happening around you, that’s something you want to keep for yourself at the risk of having the space become utterly sterile with laptop users. And regardless, it shouldn’t be up to us freelancers to decide how businesses that weren’t designed as co-working spaces should be patronized.

Hanging out in coffee shops all day may be good for productivity, but it’s bad for humanity, at least if all you do is stare at your screen and buy sustenance to keep you going. If Workfrom is all about doing great work anywhere, then let Brokelyn be your gentle reminder that there are other things in life besides work, and that dating is 100 times harder when the coffee shop you walk into is deathly silent.

The app’s founder did not immediately return request for comment. 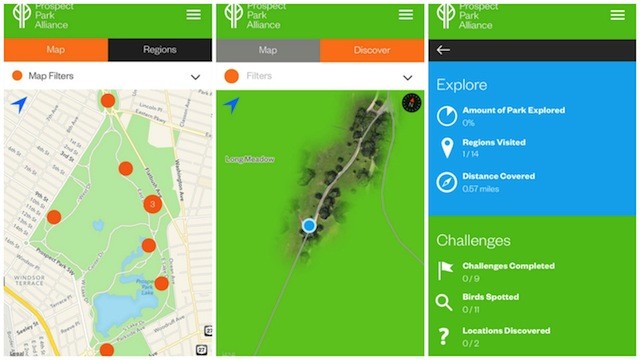 Prospect Park? Yeah, there’s an app for that now too

This is 2016, so of course there’s now an app specifically for enjoying a public park. The Prospect Park Alliance has just released its free “Prospect Park” […]