Sandwiches are the perfect food. Why? Because they allow you to combine any number of ingredients and pile them as high as you like, so long as two wayward pieces of bread can hold the whole thing together. And though I admit I’m a kind of sandwich apologist — in my view wraps, burgers and even pizzas folded in half could be included in the category… it’s just dough on either side, right? — for the purposes of this article, a sandwich shall be known only by its more conservative definition. Two slices of bread, stuff inside.

It’s about as hard to find a vegan sandwich in Brooklyn as it is to find a vegan. In other words, not very, and more frequently in select areas. I’ve spent the last six months hunting for the best vegan sandwiches in this borough, just so you don’t have to settle for a dud. And I limited my search to sandwiches that cost $9 or less. Because the minute a sandwich costs $10, it stops being a sandwich and starts being some fancy bullshit.

With that, here are the nine best vegan sandwiches in Brooklyn, for $9 or less.

Even though Little Skips is turning into something of a laptop-riddled library (opinions are my own) and no longer deserves the Google business descriptor of “upbeat,” their vegan BLT keeps me crawling back at least once a month. The sandwich is super well-made and weirdly consistent so that every time I have it, it feels like the first time.

The Vegan BLT comes with smoky maple tempeh bacon (brb dying), tomato, mixed greens, and a house-made vegan cilantro lime aioli on some fucking Valhalla wheat toast. I don’t know where this toast came from, but it’s probably the kind of toast you see Jesus in. Also, it comes with ripple-cut chips, which make for the perfect greasy interruption to your e-mail sending so you can actually look at what you’re eating.

Pro tip: Listen, if you’re feeling flush, add avocado for $1. I know I ranted up there about $10 sandwiches, but the addition really takes it over the moon. 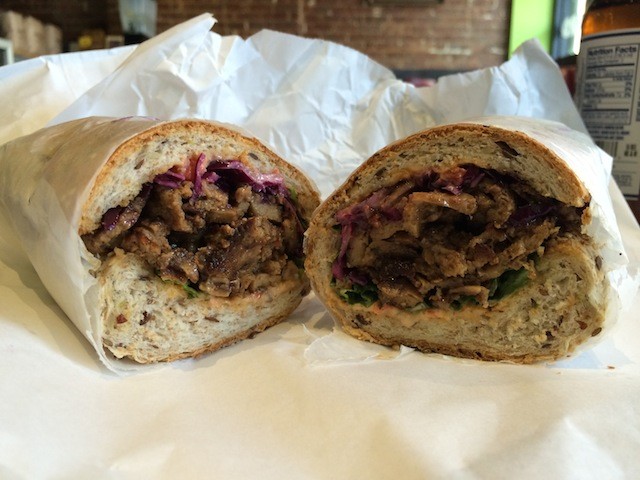 The Brooklyn Standard is without a doubt the unsung hero of BK’s sandwich scene. Well idk, maybe you’re already singing about it. But either way, it’s the tops. What’s more, their vegan sandwich game is probably some of the strongest I’ve ever seen. There’s a BBQ tofu sandwich with potato salad INSIDE and a vegan French Dip sandwich that comes with mushroom jus on the side, but it’s the jerk seitan that wins my vote.

The sandwich has jerk marinated seitan, pickled red cabbage, caramelized sweet onions, romaine lettuce and smoked red pepper remoulade on a multigrain baguette. It’s hot, crusty and the fillings are so stuffed in there, I have to believe they scooped out the bread to make extra room (blasphemy, in some folks eyes). FWIW, I’ve also consumed a quarter-pound of this seitan straight out of the prepared foods section as a meal, so.

Pro tip: If you’re really broke, get your sandwich on a roll. It’s almost as big as the baguette, but for some reason it’s only $5. (This may only be true at the Grand St. location, FYI.) 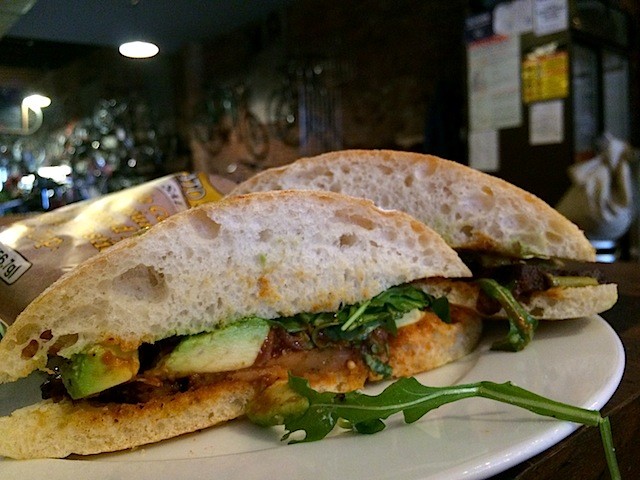 Man, nothing warms the heart like Red Lantern. It’s bike shop, a bar, a coffee shop and a true community space on Myrtle Avenue — not to mention the real standalone vegan food spot in the area, sandwiched (that’ll be the only time, I promise) between Crown Fried and some delis. Red Lantern always has a bustling regular clientele, and the space feels open and airy. The shop’s resident kittycat, Landshark, will definitely sit on your things for you while you’re in the bathroom.

But you came to hear about this sandwich, I know. So: a BBQ sauce-slathered Monk’s Meats seitan (or tempeh, when they’re out of the former), avocado, house pickled veggies and arugula, served in a big, fluffy ciabatta bun with a side bag of Dirty chips.

Pro tip: So long as you’re not being a dick, you can politely ask if they’ll skip the bread and make this for you as a salad. I’ll occasionally have it that way on a day of too many other sandwiches, and it’s great. 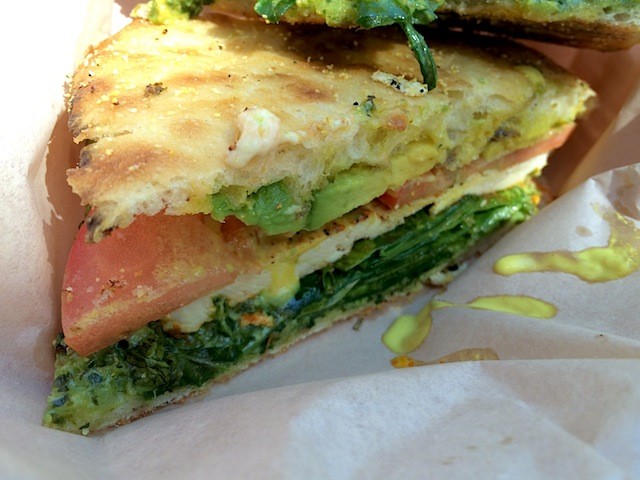 Clementine Bakery has been Clinton Hill’s all-vegan outpost for a a few years now, and weathered the competition of nearby spots like Bedford Hill and Stonefruit with a staunch loyalty to its sandwich menu, which hasn’t changed much in at least a few years. The Schmancy is one of those tried-and-true menu items, messy and huge and oh-so satisfying.

It’s baked tofu, pesto, spinach, tomato, avocado and a vegan hollandaise on a pesto focaccia. Sandwich traditionalists will appreciate this one, as it tastes kind of like the deli chicken paninis I enjoyed back when … though the bread is way better, the insides are creamier and it’s just more filling.

Pro tip: If you want snacks for later, see if they have any of their day-old scones out. For $1.50 apiece, you could pack up a box to share with friends! The scones come in experimental flavor combinations, both sweet and savory. 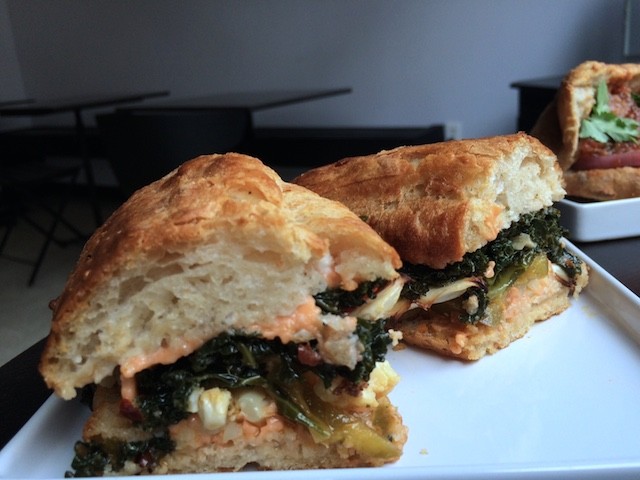 Chez Alex sits unassumingly across the street from Toad Style, another vegan spot you should check out for lunch sometime. But this place is my go-to when I’m spending a day working in Bed-Stuy, as it’s bigger, quieter and wifi-equipped so you can set up shop while you eat. It also just so happens to sell what I believe to be the best vegan sandwich I’ve ever tasted.

The Crazy Eyes sandwich is as unassuming as the store that peddles it — you won’t find any fake meat or fancy ingredients in there (and definitely no Uzo Aduba). At first glance, it’s just cauliflower, kale, cherry peppers, and soy cheddar. But I’m telling you that when you put this sandwich in your mouth, you’re going to want to write songs about it. It’s the bread that really clinches it, IMO, made in house and fresh almost every morning. It’s some kind of baguette/roll hybrid that actually bubbles inside and merges with the filling, so it feels crusty without shredding the top of your mouth.

Pro tip: Show up early in the day to score the freshest bread possible. It’ll be great regardless, but if you’re looking for the religious experience this writer had, that’s your best bet. 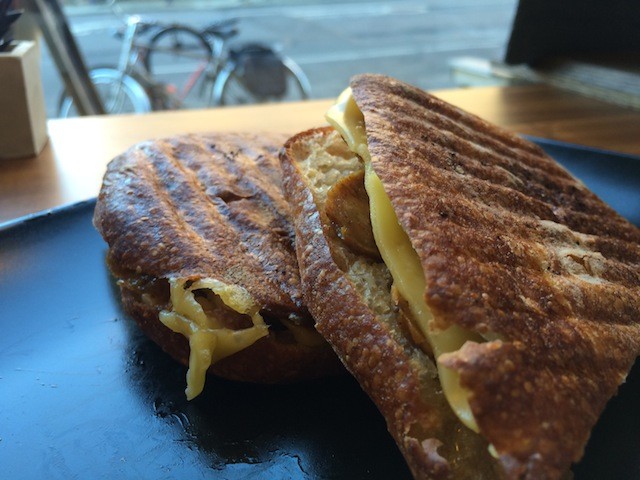 To those who cherish what grit remains of Prospect Heights, Riverdel Fine Foods might seem a pretty damn self-satisfied addition to the neighborhood. It’s hard not to harbor just a little resentment for such a clean, high-ceilinged vegan cheese shop, their fridge practically spilling over with $4-12 lumps of faux-zzerella and coconut brie. But whatever you might have against this place, put it aside until after you try the M. Night Shalami.

For such a clever name, the sandwich has few ingredients: it’s just faux salami by Monk’s Meats, and vegan provolone (which has some dijon in it, so there’s a nice tang). And it comes pressed so tightly into a crusty French bun that it feels almost like eating a pizza pocket. But oi, what a pizza pocket it is!

Pro tip: In the winter, pair this sammie with a cup of their soup. It’s all so toasty. And have it to stay if you’ve got the time; most folks don’t think to stay with their food, but the experience is excellent for solo people-watching out Riverdel’s big, bright window. 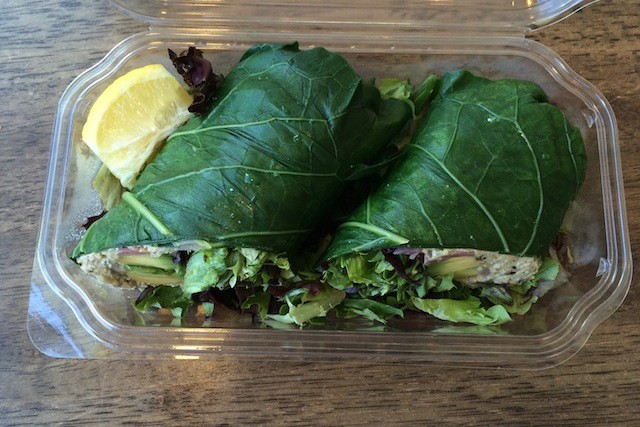 Okay, so you probably don’t have a reason to be moseying along Flushing Avenue. But the bike path to the Manhattan Bridge from the Kent Avenue bikeway will whiz you right past Brooklyn Roasting Company, so it’s a great place to stop in on your commute. This sandwich was so good, I’ll forgive the fact that the label read “Collared wrap.”

Indulge my apologism here: I know this is technically a lettuce wrap. But what-the-fuck-ever, y’all. It’s a huge steamed collard leaf wrapped around the best-achieved vegan tuna salad I have EVER tried (chickpea based) plus kelp, avocado, pine nuts, mixed greens and capers. At least you’ll never feel guilty about scarfing it down in less than 60 seconds. Why do we feel guilty about sandwiches? An article for another time. Anyway, this sammie is pre-made, but they bring them fresh every morning so you’ll never suffer a sweaty container or a soggy wrap. And frankly, they’re probably catered from another spot somewhere in Manhattan, but so long as I can buy it and eat it in Brooklyn, it’s good enough for me.

Pro tip: Get there after 10am to try this. BRC opens earlier than that, but the sandwiches occasionally take a little longer to show up in their fridge. 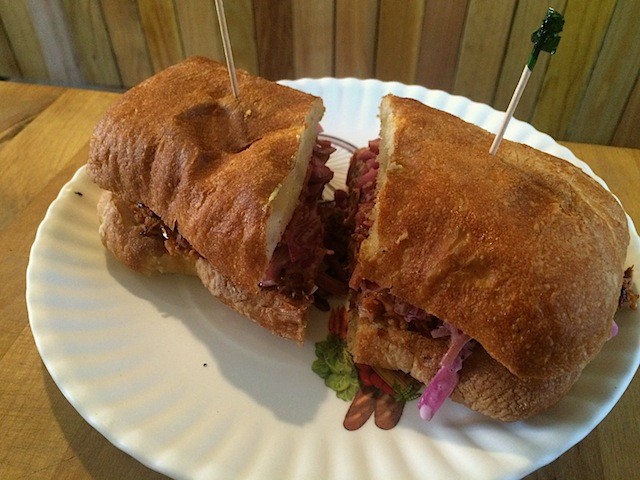 Brooklyn Whiskers may be new, but its staff are no strangers to BK’s vegan circuit. The owners know one another from Champs days of yore, and they still sell their pastries there. To me, this is very mafia exciting. And ICYMI at first glance, “whiskers” marries both cat and kitchen utensil imagery in a nice little BK-friendly pun. This spot is tucked into the bottom floor of a house on a quieter stretch of Bushwick Avenue; decor hearkens to southern towns or suburbia, and the Wahini sandwich hearkens straight to my belly.

The Wahini is for those of us that appreciate pineapple in odd places, like on pizza or hot off the grill. It’s BBQ pulled jackfruit, sweet peppers, pineapple and coleslaw, served on a nice airy foccaccia bun. If you’re wondering what the heck jackfruit tastes like, think the texture of pulled pork with the flavor of any BBQ-marinated meat substitute. It definitely has that melt-in-your-mouth thing all the meat eaters are always raving about.

Pro tip: for dessert, o-nut miss this place’s vegan spin on a cronut. Yeah, they do that. They call it the “do-ssant,” and it’s hands down (deuces up) the best vegan pastry I’ve ever had. Flavors change weekly; show up early on a weekend to get yours. 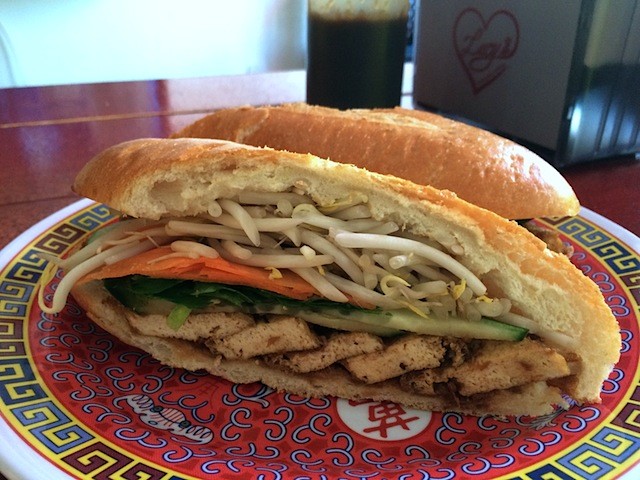 Nooice! Your search for a vegan banh mi is finally over. Lucy’s is a little hole in the wall on a nice, quiet stretch of Irving Avenue, a few blocks from Myrtle. It’s the only sandwich on the list that involves a little extra effort, as you actually have to ask to have it made vegan. All it means is they leave off the garlic aioli, but it’s so flavorful without it that I can’t imagine you’re missing much.

The banh mi has lemongrass tofu, a house marinade, jalapeño, pickled carrots, bean sprouts, cilantro and cucumber, between an excellent crispy baguette. It’s big, hella satisfying and has authentic flavor (FWIW, the store is decorated with critics’ accolades and foodie awards). And god, is it nice to bite into something that actually slams your mouth with flavor, instead of having to salt or hot sauce it. Though I did add hoisin, because hoisin.

Pro tip: Cash only. And for the spice-shy, beware your first bite: they straight up slice a jalapeño pepper and serve it raw on the sandwich. I didn’t discover this until it was too late, so just pick out the peppers before you chow down. The capsaicin residue is more than enough, trust me.