Has this ever happened to you: You find yourself in Bed-Stuy and you’ve got a rumbling stomach but not a ton of cash? Maybe you live there, maybe you’re just visiting a friend, but either way you need to eat something cheap and fast, before a serious case of hanger gets you in trouble. Well don’t fear, you’ve got this handy list of cheap Bed-Stuy eats that you can get for under $10, guaranteed to leave you feeling full and satisfied.

Walk by Chinantla without knowing what it is, and you’ll think you’re just walking past another New York City bodega. Take a step inside though and you’ll see that there’s a whole restaurant in the back, serving up all sorts of Latin delights. For our purposes (cheap, fast eating) we recommend the tacos, which come in your standard forms like lengua, cecina, barbacoa and carnitas. Tacos are never a bad decision, except Taco Bell at 2am, and what makes these tacos an even better decision than normal is that they’re quite large and will definitely leave you satisfied after just two. 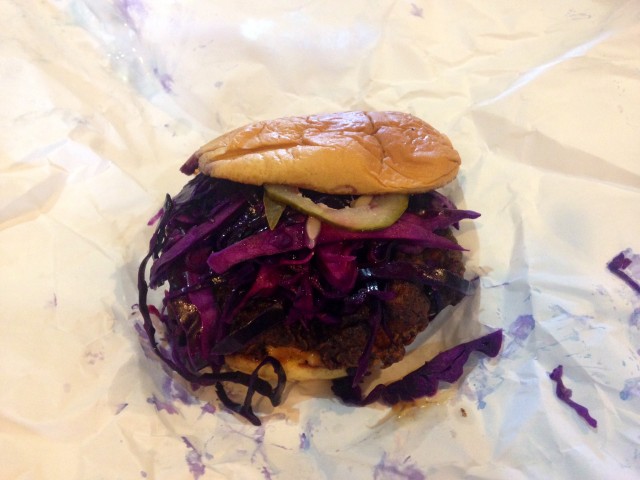 When Endless Summer decided to get out of the taco food truck game, everyone was understandably upset. The good news with the move from taco truck to storefront is that it meant they expanded into a new, sandwich-based menu with offerings like fried catfish, BBQ squash and smoked brisket. I go with the fried chicken sandwich, which hits the crunchy/chewy sweet spot and comes with a heaping helping of slaw and even some thin pickles, because hey why not. 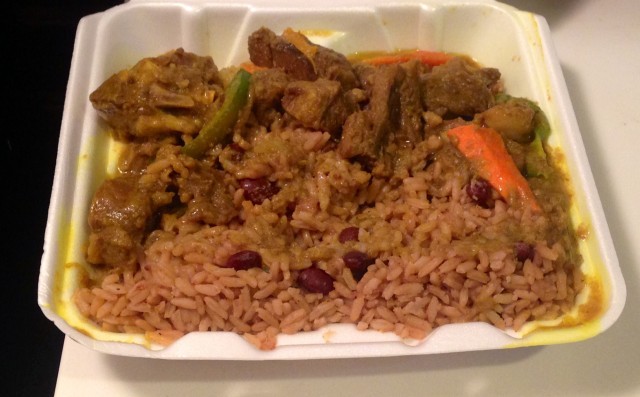 Soldier Jerk Center has a great name, and fortunately, it’s not a literal name, since an HQ full of disrespectful troops who call you names would be a place to avoid. Instead, SJC is a hole in the wall Caribbean joint quickly serving up cheap meals. I’m partial to the curry goat, but then I don’t mind eating around bones. You could also go with jerk or curry or BBQ chicken if you’re not a goat person, but whatever you do, get the rice and peas instead of white rice, since it’s just more filling that way. The medium curry goat is $8, so you’ve got enough left over to snag a Caribbean soda for $1.50 if you’re so inclined. 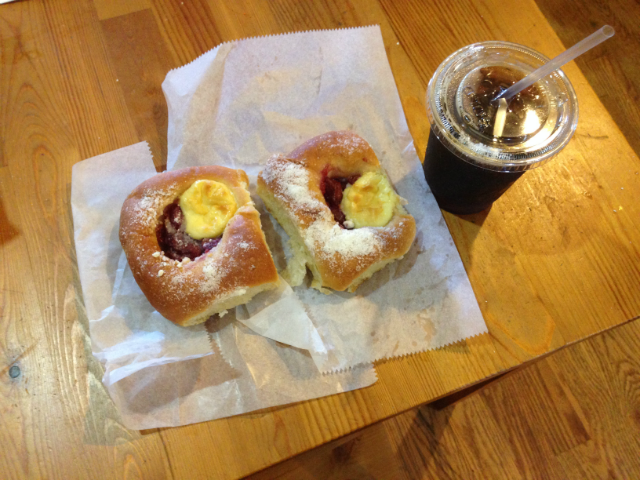 Beyond being a new frontier in New York City’s competitive eating landscape, the kolaches at Brooklyn Kolache are a great meal all to themselves. Whether you get the fruit or chocolate-filled sweet kolaches or the meat-filled savory ones, you’ll walk away full by eating a couple of them. If you’re looking to spend less than $10 and still want a solid beginning of your day though, you can’t go wrong with a small iced coffee and a paid of sweet kolaches, with fillings like cherry, blueberry and strawberry, with or without sweet cheese. 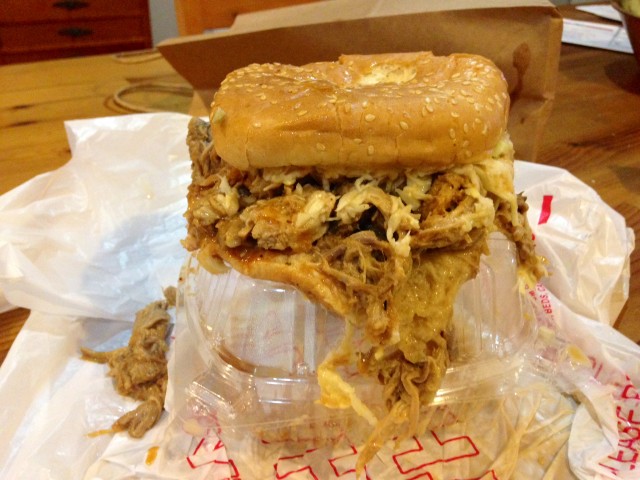 Part of what makes food from Royal Rib House taste so good is that once you actually bite into it, you feel like you’ve earned it. Royal is only open from 11am to 11pm, Thursday to Saturday, and has no sit-down service, only take out. Don’t let that dissuade you though, unless of course you want to do me a favor and make the line one person shorter. If you still want in and you don’t want to spend much, grab the chopped barbecue sandwich (get the hot sauce and the coleslaw), a juicy and enormous serving of pulled pork. If you can keep yourself from finishing the whole thing, eat half and then have cold chopped pork for breakfast. 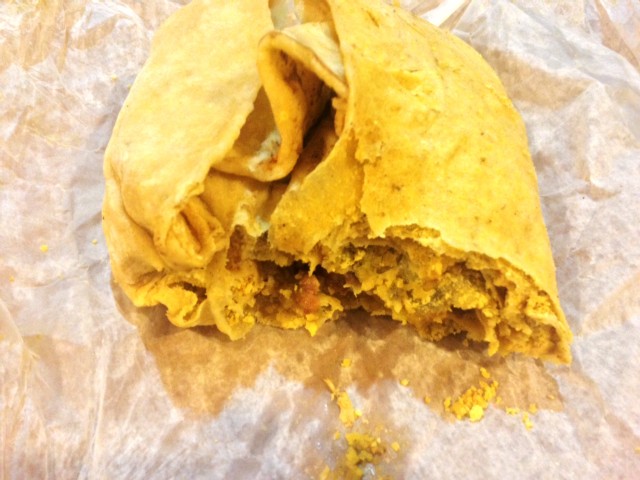 For a long time, it felt like something was missing from my life. Then I moved here and at some point got the chance to eat a roti. I then realized that while my life would always feel kind of empty and meaningless, I could at least make myself feel better by eating flatbread wrapped around expertly spiced potato and meat. Bed-Stuy’s own Ali’s Trinidad Roti makes a damn good roti, and if you find yourself getting antsy while waiting to pick up your food, you can read the posters hung up detailing the lineage of the three major world religion’s prophets or the final sermon given by the Prophet Muhammad. 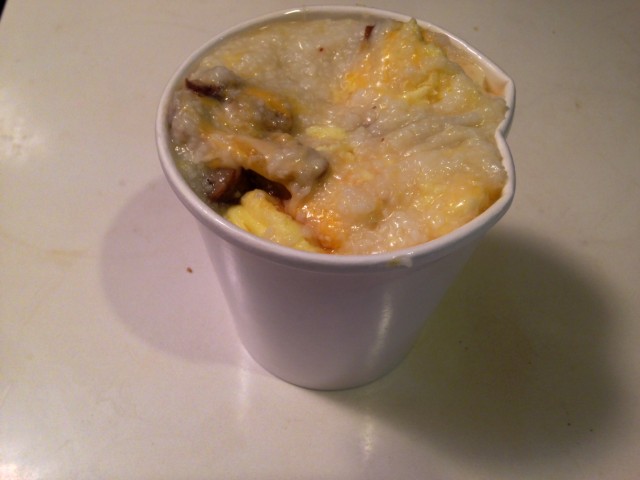 Breakfast is a real important meal, and while there are a couple good options on this list, sometimes you want more than just a pastry, more than a good old fashioned bacon egg and cheese, but less than something real fancy. In that case, Corner Grind has your back, with their Breakfast Bowl. It comes with all the major food groups: grits, cheese, eggs and pork (either bacon or sausage). I suggest the sausage, which is more filling than bacon, but hey, do you. 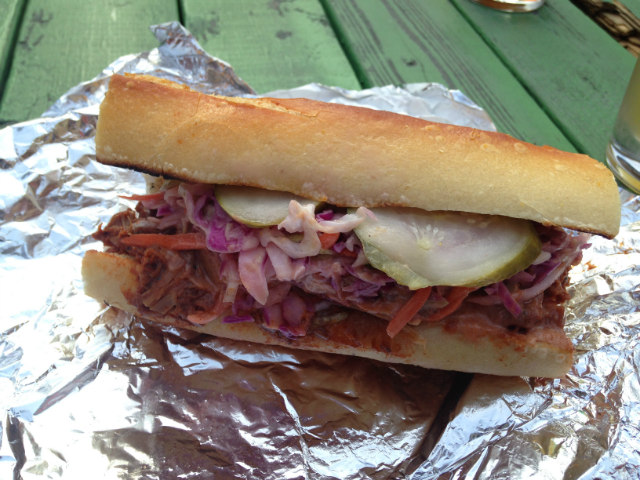 I’m a food ignoramus, so I had to look up what jackfruit was before ordering this (it’s the largest tree-borne fruit in the world as it turns out), but it ultimately doesn’t matter that much. The bigger question is does this fruit-based pork impostor from the Bed-Stuy’s new kung-fu vegan spot do a passable imitation of its meat-based inspiration? The answer is yes, as the sandwich on hero roll is sweet and spicy, and has a similar texture to pork. It also helps that the sandwich is messy and comes with coleslaw and pickles to bring the whole thing home. If you choose to eat in at Toad Style, you can also watch old kung-fu movies or waste some time on the store’s old arcade cabinet too. 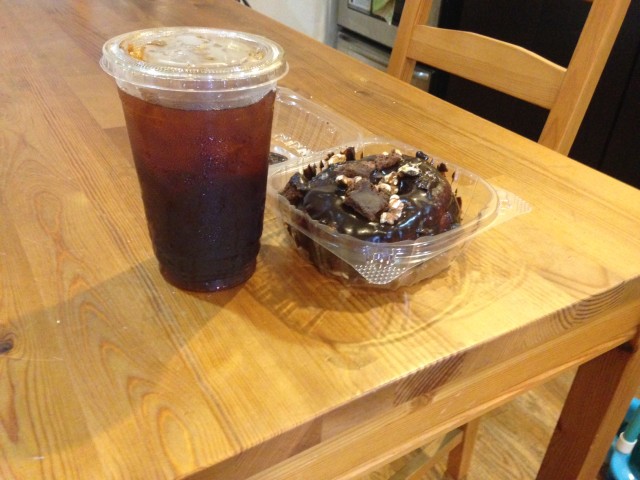 Sometimes you want the simple things in life to start your day, like a doughnut and a coffee. Just because you want those though, doesn’t mean you can’t treat yourself, which is definitely what you’re doing with one of Dough’s dense yet fluffy doughnut creations in flavor like toasted coconut, cafe au lait and hibiscus. It’s pricier than Dunkin’ Donuts, but it’s also local and more important than the politics of where you get your doughnuts, fills you up like an entire meal would.

Feed your inbox more cheap food news, sign up for our weekly email