Roommates, am I right? Like Metrocards with inconvenient balances and delivery people who have seen you crying more than once, if you live here, you probably have ‘em. Unless you can afford not to? In which case, why are you reading this blog? Kidding!! Sharing responsibilities, a bathroom, appliances, and an often laughably small “common area” with other people you may or may not know is a wild social psychology experiment that could lead to friendship, or earn you status as a regular at the bar down the street because you need constant reprieve from your hellhole of an apartment. If you’ve been in Brooklyn long enough (a mere year can suffice), you’ve probably got some war stories. See if you recognize any of your old roomies (or current, sorry) below!

The BFF Gone Bad
Moving in with your best friend was a great idea! Now you can hang out all the time! Heck, you’ll probably save some green because who needs to go out when your best friend is already across the hall? JK, you might actually hemorrhage money from going out to avoid them as often as possible. It turns out that someone who you Gchat all day at work and went on spring break with ten lifetimes ago does not a roommate make. Maybe one of you is one of these bad roommate tropes, maybe you both are (yikes, dude), but a lot of the time, close friends just aren’t meant to figure out who gets to shower first in the morning or split utilities. Suddenly you can’t stand the way they chew or they’re pissed at you for screwing up the Netflix suggestions with their bizarro taste. You learn each other’s schedules to avoid seeing each other, to meet up with your other friends to talk shit (they are so sick of your tirades). You might part ways, but you always said you’d still be friends…maybe someday.

The Party Monster
Now, the party don’t start ’til they walk in…at 5am, on Wednesday, knocking over everything in their path before stepping on the cat and falling asleep halfway slung onto the couch. Hey, we all have our nights, but this roommate is at it eight days a week. There are perks to living with this specimen; you might have access to a lot of drugs if you’re into that sort of thing, and you have someone who is always down. But then you start to realize that you’ve talked to a smattering of strange dealers more than you talked to your parents this week. And if your roommate is one to “bring the party home,” as Craigslist postings so often forbid, you’re really sunk. You wonder when your apartment started to resemble the Mos Eisley Cantina. After a while, you begin to regard the paraphernalia and sticky upturned shot glasses as others would look at faux-vintage “quirky” tchotchkes from Urban Outfitters: this isn’t your taste, this is a little contrived, but eh, could be worse.

The Stage 5 Clinger
The Craigslist ad said they wanted someone “to have a glass of wine with after work, but don’t expect to find a new best friend.” You laugh at this now, mirthlessly. Initially, you found their frequent invitations to happy hours and divulgings of personal secrets to be touching. When they texted you after you didn’t come home one night, you were pleased by the fact that you could now tell your parents in earnest that someone here knew and cared about your day-to-day whereabouts. They start to post pictures of you captioned “#roomielove.” And now, now they’re texting you, aggressively, when you go to the bodega on the corner for ten minutes of sweet relief. Their walls are likely adorned with wooden letters spelling out seemingly unrelated verbs. Is “Live Laugh Love” in order of importance? Is it an anagram for “Evil Veal Ghoul?” Probably. We live most of our lives alone, and urban isolation can be brutal. But this person is like a hybrid of Elmira from Tiny Toon Adventures and that chick from Single White Female, and we all know how that story ends.

The Casanova
Maybe this person is extraordinarily good-looking, maybe they have an irresistible Tinder profile, but whatever the reason, they are getting down with an infinite harem of partners like some kind of H&M-clad Adonis. If all parties involved are polite (and of course engaging consensually), and they don’t, say, bang someone you’re dating, this roommate trope can be one of the most benevolent, and entertaining. There is nothing quite like watching a bewildered, crusty stranger emerge from your roommate’s love dungeon and grasp to make small talk with you as you casually pour your cereal. You oblige, of course, until your roommate ushers them away without ever addressing them by their name, somehow. But if they’re tub thumping all day and all of the night, and you’re losing sleep, then screw them (not literally–you know better.) 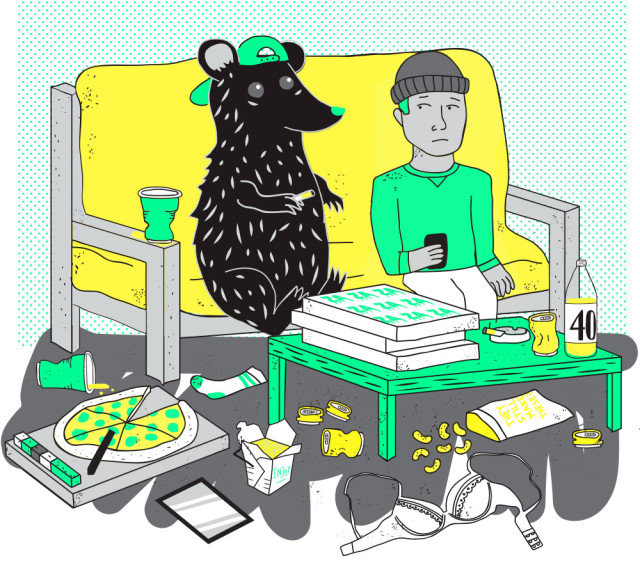 The Disaster Area
Granted, the messy roommate genus contains two species. There’s the clutter-messy variety, who, upon entering, tosses every item on their person across the apartment like an overgrown flower girl and leaves them strewn about for weeks on end. You can always keep track of your pantry inventory because they leave the cupboard doors and drawers open every time they access them, because they are a monster. Then, there’s the straight-up gross messy person. Certainly all of us have forgotten about a Tupperware of putrefying food in the fridge; we are but mere mortals. I’m talking about someone who hoards stacks of your plates and bowls in their room and in your sink, crusted with scraps of food that are no longer identifiable. Your apartment is a petri dish; the circle of life is playing out right on your counters and coffee table. A stench wafts through the apartment anytime the door to their lair opens. Can’t they smell it? Can they not? If only your legion of new fruit fly and ant roommates paid rent, then you’d be livin’ large.

Your Significant Other
You thought moving in with the s.o. was going to mean having sex all the time on any possible surface of your apartment! And it does, sometimes, but it’s also a lot of compromising and a lot of bodily functions that had not been previously addressed. But hey, amor omnia vincit– except maybe your allergies to their cat or wet towels on the bed again, you asshole? Shacking up together is a bigger leap here than it would be in a place with remotely reasonable rent, as a good apartment is hard to find, not unlike a good (wo)man. Conversely, since you only need one bedroom for two(?) people, your real estate options broaden a bit. You can move to like, Clinton Hill or something. Just don’t move in for the sole purpose of saving money, and don’t break up, I guess?

Their Significant Other
Looks like you got two roommates for the price of one! As in, the occupants of your apartment have doubled, but their rent contribution is still the same!! You don’t know what the hell kind of soggy shoebox-looking place this person actually signed a lease for, but man, they sure looove your apartment. They love it enough to keep not only a mangy toothbrush in your medicine cabinet but all their favorite toiletries, their bike, their guitar, and two seasonal coats at your place. You know them better than your actual roommate. You might even like them better than your actual roommate. Maybe they’re cool, maybe they suck, but regardless, having another person you didn’t sign up to live with in your apartment at all times is guaranteed to drive you nuts.

Sign up for our weekly email, it gets along with all types of inboxes