I know – you’re getting inundated with too much Halloween stuff right? No. Of course not. You should love Halloween and want to hear more about all the awesome stuff to be done. There are costume contests, carving contests, trivia contests, scary movies, scavenger hunts and murder theater and so, so many drink specials. To help navigate Brooklyn in October, here’s a list with ideas all laid out for you. So breathe, get it together, get ready and go forth. Prepare to play Frogger with the slutty pirates and nurses in order to make it from one party to the next. Take notes, make an itinerary and don’t stop until the candy corn vomit spews forth. I’m know I’m ready – I’ve been living in my Halloween costume for the past three months. Oh Nic Cage dressed up like sushi, this is your most delightful roll yet.

Carve Your Way to Glory

Crest Hardware is having their 3rd Annual Pumpkin Carving contest. To enter the contest you must come with an already carved pumpkin between 7 and 8pm. However, if you’re late you can still put the pumpkin up for display, you’re just not eligible for the glory of winning. You can enter up to four pumpkins at a cost of five bucks each. The voting is done by audience ballots with the winner being announced at 9:45. You can pick up a pumpkin at grocery stores like C-Town for $4-5 bucks, so don’t go buy one on Bedford because they are pricey. Also note that carving tools sold at places like CVS won’t help you at all. Just use a steak knife.

If you’d rather carve in a more communal environment, Heavy Woods, the rad new bar in Bushwick by the same owners as Bodega, is having a pumpkin carving contest. Your twelve bucks gets you a pumpkin, entry into their contest, which has a $50 bar tab prize, a cup to a PBR keg and chili. I like all of those things.

The Ghosts of Unions Past

I’m a fan of two events that Union Hall is putting on for the Halloween season. The first is a 90s Costume Party. There’s a costume contest with a $50 first place prize, $25 second place prize and a SHOTS prize for third. Too many pills-popped Jessie Spano anyone? While that one sounds pretty fun, I’m even more excited about a bunch of people dressing up like werewolves and singing Dionne Warwick. Hopefully a real werewolf doesn’t infiltrate the band, because that could get ugly.

Where Everybody Will Be Dressed As Binders

My personal favorite  event is the HallowMEME costume party. How many binders do you think we’ll see? How many Bane Capitals? Make sure you RSVP as this will most likely fill up and then you’ll miss the five girls dressed as One Direction making out with five Batmen.

Travel Back in Time, to the Real New York

Along the lines of Sleep No More, this show is an interactive theater experience where each guest has different encounters with actors and is incorporated into the show. This 1970s inspired performance revolves around murders and mafia activity in a quest of whodunnits. A ticket includes three cocktails, which you can use to fuel your sweet dance moves at the post-performance dance parties on the 26th and Halloween. Costumes are encouraged by the event but not by me. I do not encourage 70s costumes.

Don’t Go In The Water

Coney Island has a few things going on for Halloween. There’s Nights of Horror, with unlimited rides, haunted mazes, killer clowns and the like. It was featured in our haunted house deals, but to reiterate, you can get one ticket $15 or two for $30 through Living Social. Coney Island also has dates all throughout October for Creep Show at the Freak Show’s Dirt Work at the Wax Works. This is a “spook show” where you tour around a haunted house, only instead of ghosts and chainsaws, you get confronted with nightmare versions of the Kennedy Assassination and Richard Nixon, which will really be something if it’s scarier than the real guy. 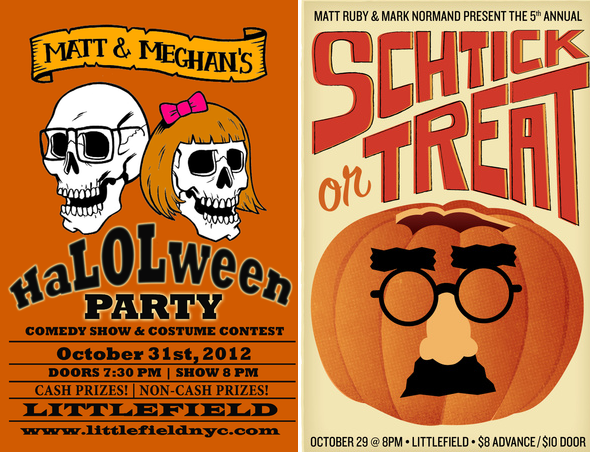 Both at Littlefield, 622 Degraw Street, Gowanus

Littlefield is hosting two comedy nights. The first one is Schtick or Treat in which a bunch of NYC comedians will have three minutes each to perform a quickie set as their favorite comedian. I’m assuming that means everyone will perform as either Joan Rivers or Mitch Hedberg. The second show, Matt and Meghan’s HaLOLween Party, is a combination costume party and comedy show.

This Williamsburg scavenger hunt also showed up in our Halloween deals. You can get two tickets for $35, so bring a friend. It looks kind of awesome. It’s a race, there are tasks to complete and you have to run around Williamsburg dressed as say, a giant sushi roll.

So there you have it – a run down for the most magical time of year. Get it gurl.