Bars are aplenty in New York City, and if you go to them enough, you’ll find that some are run completely differently from others. Maybe you frequent a favorite haunt or two that seem to play by their own rules, whether that means giving you a free drink every now and then (buybacks, although industry standard, are a legal gray area), or enforcing a $20 credit card minimum when you want to start or pay a tab (under the Dodd-Frank Wall Street Reform and Consumer Protection Act, credit card minimums are legal up to $10).

To solve some of the mysteries of the many booze-related rules, we chatted with Elke Hofmann, esq., a New York law practice owner who specializes in bars, restaurants and beer, wine and spirits-making businesses (including Brooklyn’s newest brewery and 2017 Beer Book member, Lineup Brewing! Holler!). Here are the top takeaways we gleaned from Hofmann’s expertise.

First of all, from what we learned, we can say the legal landscape for New York’s alcohol purveyors is, in a word, intricate.

“There are a lot of gray areas,” Hofmann said. While anyone can visit the State Liquor Authority website, it’s often difficult to read and, for the most part, outdated. “It is not easy to navigate,” she said. “Alcohol is a highly regulated industry and there are so many intricacies that there is rarely a solid answer to anything that has a twist.”

Furthermore, she said, although there is a retail handbook “somewhere on the site,” it is “really out of date.” And if you’re looking for a list of the state’s bar laws, “that list doesn’t exist,” she said.

1. Bars are all allowed to sell bottled and canned beer to go

Any bar is legally allowed to sell you bottles and cans of beer to go, as long as the package is sealed. The same is not true for all beverages. “They do have different rules; you can get a round to go for beer but not for wine,” Hofmann said. Recently added to the “allowed” list: cider.

2. Bars are not allowed to sell pre-mixed drinks, like sangria, cocktails on draft, and infused liquors, out of their original package

“Another one that’s illegal that people do all the time is pre-mixed drinks, which are illegal 99 percent of the time,” Hoffman said. Sangria in a vat? Illegal. Gin and tonic in a jug? Illegal. Fruit- or jalapeño-infused vodka in an unlabeled jar? Illegal. Cocktails on draft? Most of the time, illegal.

“Drinks should be made to order,” said Hofmann. The exceptions: “there’s a specific carveout for things like slushie machines and particular kinds of kegs that spin and churn a spirit.”

Again, this is one that is not strictly enforced. “There are entire bars built around infused vodkas,” Hofmann said. “No one has stopped them, but it is technically illegal.”

3. Beer tap handles have to be labeled, with words (i.e. brewery and beer name)

“This is a pet peeve of mine and it’s ridiculous that it’s still on the books,” Hofmann said. For consumer protection, technically, tap handles must be labeled with the brewery and beer name, so, in theory, the consumer can see the beer that’s being poured off the tap.

“There’s not a single stylish bar in the city that complies,” Hofmann said. “Even the most elaborate menus with way more information than a sticker on a tap handle—ABV, IBUs—technically, on the books, [are illegal].”

In fact, she said, a handful of bars got in trouble several years ago because of Sixpoint’s old tap handle, which originally had only the Sixpoint star logo. However, the law is not generally enforced, but will be “tacked on” when a bar gets into trouble for some other infraction.

In fact, she said, several years ago there was even a proposal to change the law, but it was thrown out when breweries, like Brooklyn Brewery, opposed it (tap handles are a great form of marketing for breweries.)

4. BYOB is illegal, unless you have a liquor license

You know how all those places without a liquor license allow customers to bring in their own? Or, perhaps are allowing BYOB “while they wait” for their liquor license? Illegal, says Hofmann.

“BYOB is not a license, and you can’t do it unless you have a license. BYOB until getting a license is illegal. For the Thai place with 20 seats that’s never going to apply [for a liquor license], the SLA doesn’t care. The police would have to enforce it. If you have applied [for a liquor license], it’s not worth it, because the SLA will come after you. If you’re going to do BYOB, do it under the radar.” 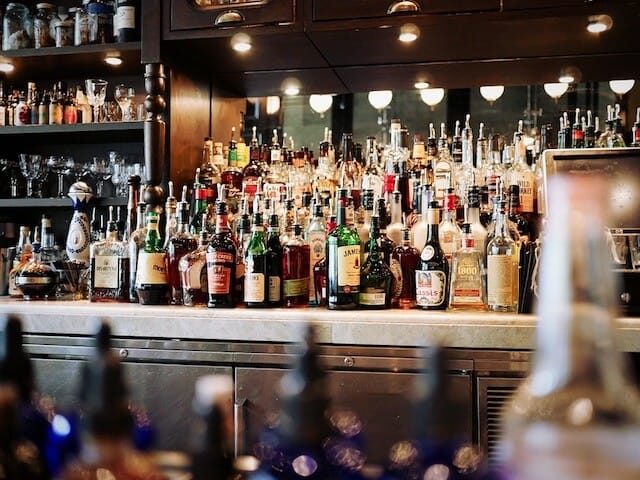 5. Corking fees are not enforced by law, they’re there so retailers can make money

Liquor licenses are expensive. If you’re at a business that’s primarily a grocery or part beer shop, part bar, the corkage fee (an amount that’s added to the original to-go price) is not a legal requirement, it’s the choice of the retailer since oftentimes you’d be spending significantly less drinking bottles and cans on premise than draft. “That’s them saying, ‘we got our license, so we want to make some money back,’” said Hofmann. No harm, no foul, but since it’s up to the retailer how much extra to charge, some shops’ fees are more expensive than others.

When it comes to happy hours, alcohol can’t be given away for free, and can’t be less than half of its usual price. As such, 2-for-1 deals are legal, but 5-for-1, for example are not; additionally, “buy one get one free” is ok, because both drinks are half priced, but “buy one get one for one cent” is illegal, because it’s creating a price that’s cheaper than half the price of the original drink.

Pro tip: “enforcement is high in the summer,” Hoffman said. “At Rockaway Beach in the summer, police are running up and down the beach issuing citations…to make a public show of it,” she said.

8. Bars are not supposed to take anything of value from producers

If you’ve ever seen brewery or distillery-branded equipment, like a cooler, refrigerator or other appliance, you can safely bet it’s illegal. This law is even stricter in California, where items as small as 20-cent keychains are accounted for (and in that particular case, legal).

9. Someone who opens a beer bar can’t also open a brewery

There are, however, exceptions, thanks to recent bills like the farm brewing and distilling licenses which allow small and independent brewers, distillers, cideries and wineries to open additional (retail) locations under conditions that certain percentages of their goods are produced using state ingredients—which, in itself, is technically illegal.

Additionally, investors are not allowed to overlap, meaning if someone has invested in a beer bar, they cannot also invest in a brewery.

10. Bars can have different legal closing times, even when they’re across the street from each other

According to Hofmann, the biggest headache involved in the process of opening a bar in the city is that the prospective bar owner must get recommendations from their local community board, and “every [community] board is totally different.” In addition, in the event that your bar is approved, community board members are the ones who decide on rules like what time you can stay open until. Even though the city law says 4am, your bar’s might be 11pm.

“It’s not even in the law, and the rules don’t have to be objective or fair or reasonable,” she said. “Legal closing hours according to state law is 4am, but if you’ve now gone through the process and entered into an agreement with your community board [and want to stay open until 4am], they will recommend denial and the police and liquor authority will enforce that. But the bar across the street can be different.”

Got any other wacky New York law knowledge or questions? Tell us in the comments.