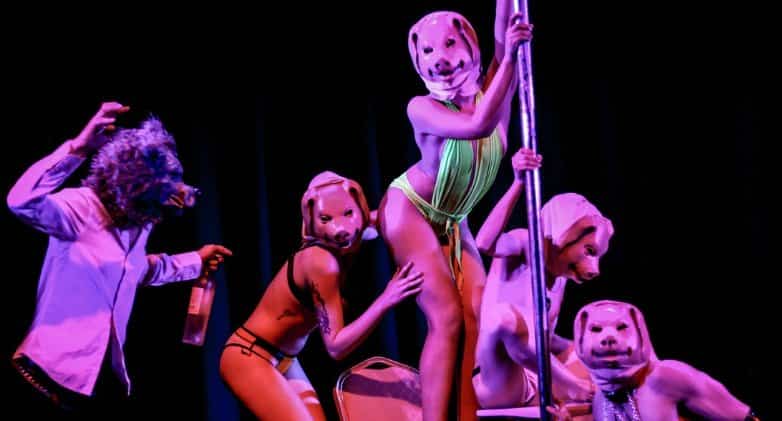 Last week an invitation landed in my inbox for Dirty Panties The Musical at Bushwick’s House Of Yes. “Fancy the theatre this week?” I called out from the kitchen “Sure, Sondheim?” my innocent boyfriend replied from living room, “Er, not quite.”

Written and produced by current and former sex workers, Dirty Panties The Musical was not a musical at all, but more a series of emotional and abstract vignettes covering many aspects of working in the ‘business’. Some scenes were funny: for example, the jaded sex worker whose inner monologue was all about which pizza she should eat later as her john whipped her. Some were raw – a moving and daring dance and aerial piece performed by Joshua Oates hit that note. The finale made a point about how one decision can lead to the next and how the instinct to survive is the driving force. I won’t ruin the ending for you, but I will say it’s pretty spectacular.

Aerial, dance, comedy and music all feature in the show, as does activism. For the project, the House of Yes partnered with the Sex Workers Outreach Program (SWOP), who are a human rights organization working towards legalizing sex work. They donated all profits from the show to SWOP. SWOP helps protect the rights of sex workers who choose the profession and feel empowered by it. They are seeking the rights that any workers of any trade deserve.

So, why now? Many musicals have featured prostitution, Miss Saigon for example – the show which has recently returned to Broadway has a sex worker as the protagonist. Les Miserables, Best Little Whorehouse in Texas, The Life, Jekyll and Hyde all feature the sex trade. Since these musicals were written in the 1970s and 80s attitudes have changed tremendously regarding women who are sell their bodies, as a voluntary decision or, more frequently, by force. We are now beginning to realize that these women (and men) should not be punished by the criminal justice system, but helped to leave the business and the cycles of abuse or if they make a choice to stay in the industry, supported and given rights.

The day after I saw the show I opened my purse to discover it was full of confetti. After a moment of bewilderment, I realized that this was from the moment in the show where a john, who was watching porn, ejaculated tissue paper from an enormous confetti cannon, showering the audience. I suppose my point is, I’m lucky that after a night out, all I bring home are remnants of a good time, a handbag full of confetti paper. The weight some trafficked sex workers carry around with them both physically and emotionally must be incredibly heavy. We can help to lighten their load. There is a way to help rebuild the lives that these women and men were intended to have before circumstances came in to change it all.

Yesterday NYPD Chief Commissioner James P O’Neill, launched a hotline for victims or those who suspect a victim, to combat sex trafficking. Victims are often undocumented women and/or transgender individuals, not to mention children who are being abused for someone else’s profit. O’Neill also added 25 detectives to the vice unit.

Whatever your attitude to legalization may be, (though I do hope you’ll be on the right side of history with me here), I think we can all agree that these women and men need help and support. There are two organizations in NYC that offer some amazing services that you can get involved with.

The Sex Workers Project is a national organization. They are currently looking for 2-3 legal interns, particularly those with experience in criminal or immigration law.  They are also seeking volunteers who can assist with website design, organize online fundraising campaigns and answer warmline calls – a help line staffed by peers with similar traumatic experiences. For more information check out the website here.

A local organization is Restore, an amazing group who helps to rebuild the lives of people who have been sex trafficked, even if they are in the country illegally. They provide legal and social services and safe housing. They are currently seeking volunteers who can offer these services:

-Marathon runners who run for Restore.

Both of these projects needs volunteers to stay afloat and even if you don’t have money to give, your time can be just as valuable. Also, FYI, the NYPD Sex Trafficking Hotline is: 646-610-7272.