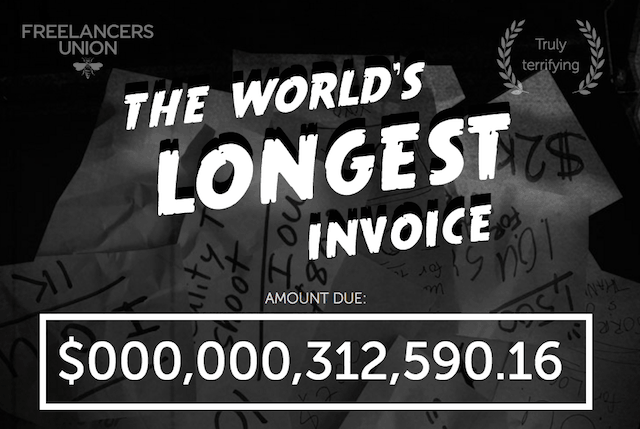 When you work as a freelancer, getting paid is often a matter of nagging your employers until the check finally comes in the mail. There’s no dignity in it, and it certainly shouldn’t be the accepted norm. Since it is, though — at least on the part of those lazy employers who refuse to pay up — you can do your part to condemn the practice by checking out The World’s Longest Invoice, a pulp horror-themed website by the Freelancers’ Union that’s tallying up all freelancers’ unpaid bills nationwide in order to spread awareness about how scary it actually gets.

The tally is already at $312,590 and counting. And the outstanding amounts people have listed on this thing are staggering, ranging from three-digit kill fees and illustration costs to six-figure balances for long-running production gigs and marketing campaigns where the contractors still have yet to see a dime for their work. One guy even publicly listed his client, TV series The Security Brief, and claims he’s still waiting for $9,750.

I don’t know about you, but that’s over a year of rent for me. Imagine taking a time-sucking last minute gig because you need the cash, and ending up as strapped as when you started, with even fewer bankable hours to your name before the first of the month.

The World’s Longest Invoice is in support of Freelancers’ Union’s efforts to pass the Freelance Isn’t Free Act, which would level attorney fees and civil penalties against employers who fail to pay freelance workers within 30 days of a project’s completion (and they’ve done this World’s Largest Invoice in past years too).

Most of the freelancers who have contributed to this invoice thus far have given their names but kept mum about their employers’ identities. That makes sense for discretion’s sake, since there’s a reasonable danger that erstwhile employers might see the invoice and then have real grounds to refuse to pay (libel).

But why shouldn’t we oust non-payers by name? It’s not about revenge, it’s about clarification. The only way to change the game is to speak out, and to remind people behaving badly they can’t get away with it. So we say go for it! If you’ve been stiffed, then name the shady bastards who screwed you over on that invoice, or the “eccentric” individual who’s been giving you the runaround on a few grand. You already know you’re never working for them again, so you may as well make sure your fellow freelancers know to stay away, too.