Summer is great for certain things — Grease-style lovin’, for instance — but it’s not great for red wine. The tannins, higher alcohol, and fuller body of many red wines tends to relegate them to cold-weather-only status. But you don’t have to cut out an entire category of wine just because the AC is on. There are a number of reds that will help you get a buzz even while you’re sweatier than a French dockworker.

Channeling the immortal words of Hansel from the epic Zoolander: Beaujolais is so hot right now. Beaujolais, a rather large region south of the delicious Pinot Noir- and Chardonnay-growing areas of Burgundy, primarily grows the thin-skinned grape called Gamay. Fortunately for brokesters, this situation does also make for relatively inexpensive drinking. Even the very best examples are terrific bargains, though prices have crept up in recent years, and they’re all best served chilled.

Beaujolais gets short shrift because of the phenomenon known as “Beaujolais nouveau”, which started as a celebration of the new harvest but became a huge publicity stunt in the 70s and 80s. Beaujolais nouveau, as a general whole, is little better than alcoholic grape juice (though some fun, good versions exist). Although Beaujolais nouveau increased the region’s profile across the world, it also caused many people to associate the region with cheap, insipid wine. This is a shame because Beaujolais offers some real gems.

If you have some extra cash, go for the better-quality Beaujolais cru (which are from one of the ten designated cru villages that offer more finesse and character than standard Beaujolais). 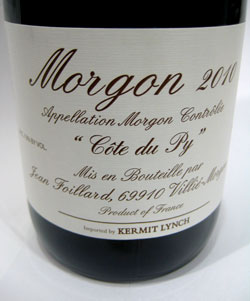 UVA Wines and Spirits offers a large selection of Beaujolais cru. Morgon, one of the ten cru, is considered by many to produce the most serious, well-structured Beaujolais. I’ve found that wines from Morgon have wonderful body and a surprising level of tannins. Jean Foillard’s “Cote du Py” is biodynamically produced, finely balanced and can stand up to anything you might grill this summer.
Available at UVA Wines and Spirits, 199 Bedford Ave., Williamsburg.

TO STICK TO A BUDGET

God, I love this wine. It’s not strictly a Beaujolais but is made in the region and from the same grape. This is a joyful wine that is meant to be quaffed in huge quantities (unlike the producer’s other offerings, which can be cellared for years). You can, too, because it clocks in at only 12.5 percent alcohol by volume. It’s all bright fruit, like crushed strawberries. Very juicy, very light, dangerously good, and cheap as hell. Buy this by the case and drink it all summer long.
Available at Blanc & Rouge, 81 Washington Street, Dumbo.