Yelp, a Hunger Games-level ranking tool that every city dweller has a love/hate relationship with, is an extensive online guide to any and every local business.

Looking for some sort of obscure plastic surgery? A grocery store selling kale-infused chocolate? A tiki bar with animatronic hula dancers? Turn to Yelp and you’ll probably find what you’re looking for.

Yelp, however, is also a notorious haven for hilariously salty reviews written by spiteful, savagely wronged customers. Even top-notch establishments have received pitifully angry evaluations that don’t necessarily reflect the character of the bar; maybe the bathroom decor was slightly outdated, or the bendy straws weren’t bendy enough. Many of these outrageously silly reviews are found among the Yelp pages of some of Brooklyn’s very own bars, and we’ve ranked them from least to most salty.

LEAST SALTY Renee R. had a one-star experience at Park Slope’s beloved 5th Ave. gay bar, due to an apparent pool tyrant in the billiards room. Though Renee appears relatively bitter about the experience, it seems that a much-needed coup d’etat solved her pool problem. Not so bitter after all.

SALTY-ISH Jason R. gave one measly star to The Gutter, in Williamsburg. Thankfully, it wasn’t due to any deadly disease outbreaks this time, merely just some outdated rock music. Jason’s sarcastic closing remark, however, leaves us a bit perplexed— doesn’t everyone love a good dad bar? 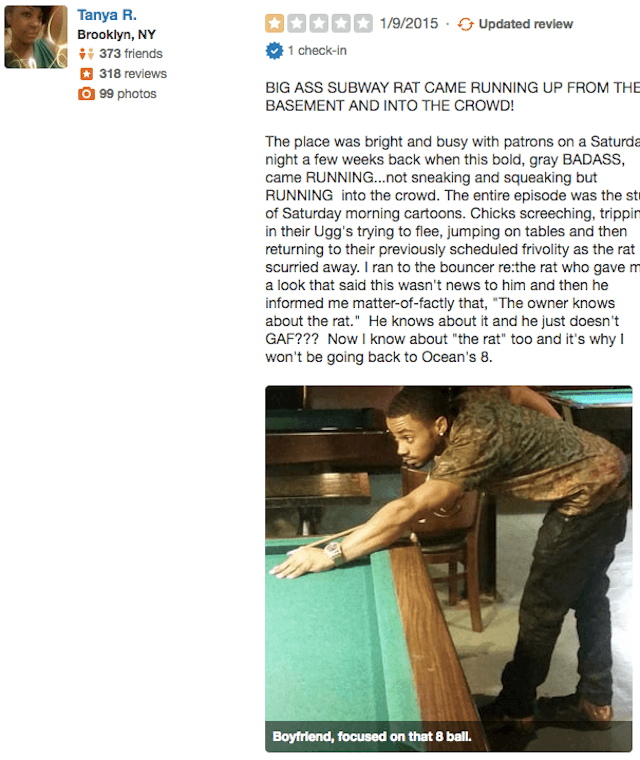 OH-SO-SALTY It’s relatively clear as to why Tanya R.’s experience at Oceans 8 at Brownstone Billiards in Park Slope didn’t quite deserve 5-stars, but at least her boyfriend got a profile pic-worthy snapshot of himself playing a leisurely round of pool?! 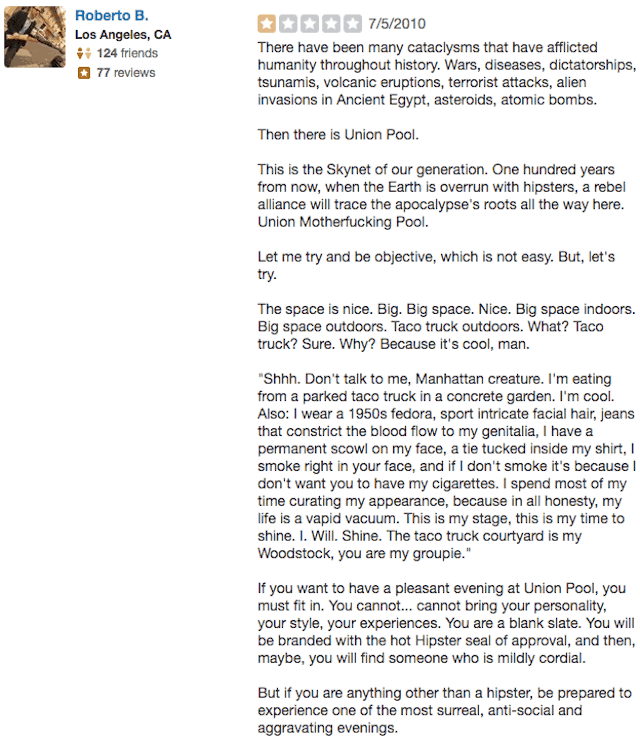 SALTY AF Union Pool, in Williamsburg, clearly had a few too many “1950’s fedora-wearing” hipsters for our good friend Roberto B. Though he compares the beloved bar to a natural disaster, he seems to have enjoyed their undeniably lovely space and taco truck, because honestly, who doesn’t love a good backyard taco?

DISAPPOINTINGLY SALTY Ben H.’s saltiness is incontestable as he describes his “glass of disappointment” from Kimoto Rooftop in Downtown Brooklyn. While we truly can’t imagine what “boiled garbage” tastes like, there must have been something mildly redeeming about the experience, since he gave two stars instead of one. Also, Kimoto Rooftop is fly as hell, so probably Ben H. was just having a bad day / dropped the boiled garbage into his drink himself.

EVEN SALTIER We have no idea what disaster Jon D. could have possibly ordered at Woodland in Prospect Heights to have rather eaten old snails and acorns, but his one-star rating oozes melodrama. We also aren’t totally sure that we’d ever prefer the rogue dental procedures he speaks of, as opposed to going to a relatively decent Caribbean-American bar downtown, but Jon’s morbid imagination deserves a round of applause. 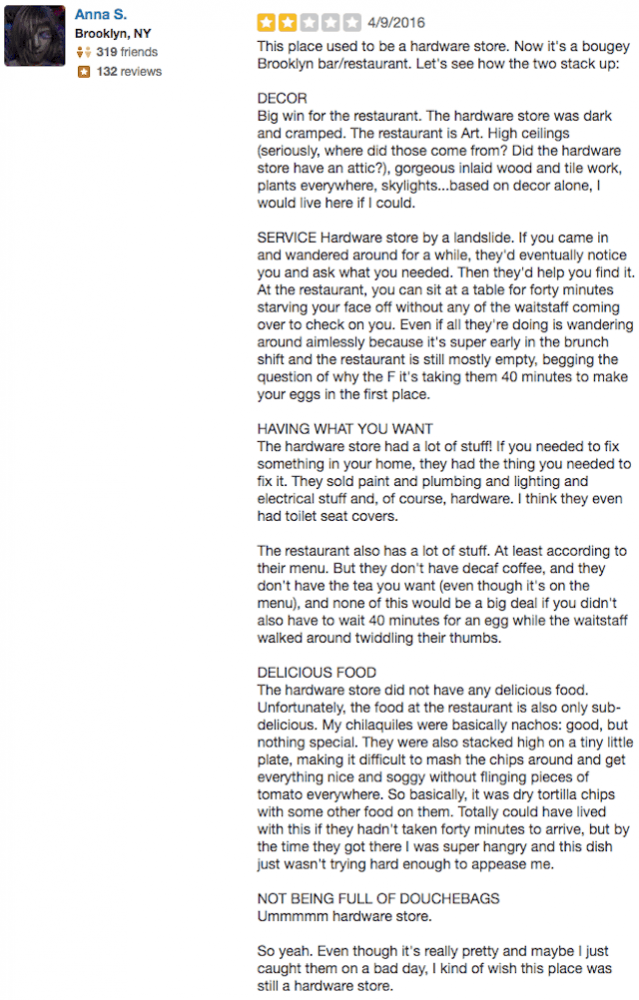 THE MOST SALTY We appreciate Anna S.’s dedication to writing such an extensive and humorous composition, meticulously comparing Clinton Hill’s bar and restaurant, Sisters, to the previous tenant (which was a hardware store). Among her listed categories of “decor,” “service,” “having what you want,” “delicious food” and “not being full of douchebags,” it’s somehow hard to believe that the hardware store surpassed the divine brunch and cocktails of Sisters, but Anna’s experience obviously says otherwise.