If Trump’s electoral win and the Patriots’ somehow Super Bowl victory can teach us anything, it’s that sometimes the bad guys come out on top–but only temporarily. Two weeks have passed since the inauguration, but the constant barrage of covertly racist executive orders, extrajudicial decisions and bad tweets means the #resistance is alive and well. Here’s our latest roundup of anti-Trump events and rallies happening this week—plus plenty of parties, fundraisers, and other opportunities to let off some steam. We’ll keep updating as more come in.

The latest of #GetOrganizedBK’s monthly meetings will kick off with a timely panel on protecting immigrants and New York’s “sanctuary city” policies before transitioning into smaller working group meetings. The 15 working groups – including one dedicated to fighting Trump’s cabinet and SCOTUS appointments and another focused on protecting reproductive rights–provide plenty of opportunities to get regularly involved.

Make sure you get there early–doors open at 5:45, and the venue caps out at 1,200 people. If you aren’t one of the lucky few who gets in, the meeting will likely be streaming on Facebook Live.

Join a coalition of artists and activists working to protect the city’s surviving DIY spaces. The NYC Artist Coalition is developing a final list of recommendations for the Department of Cultural Affairs that will help the agency preserve independent spaces, ensure safety for tenants and artists, and actively work against displacing members of the community. There will be snacks!

The North Brooklyn Progressives is still a nascent organization, meaning this is the ideal time to get involved. At Monday’s meeting, they’ll be voting on their group’s final name and crafting a list of rules. This is also the last meeting you can attend if you want to be eligible to vote for officers at their March meeting. 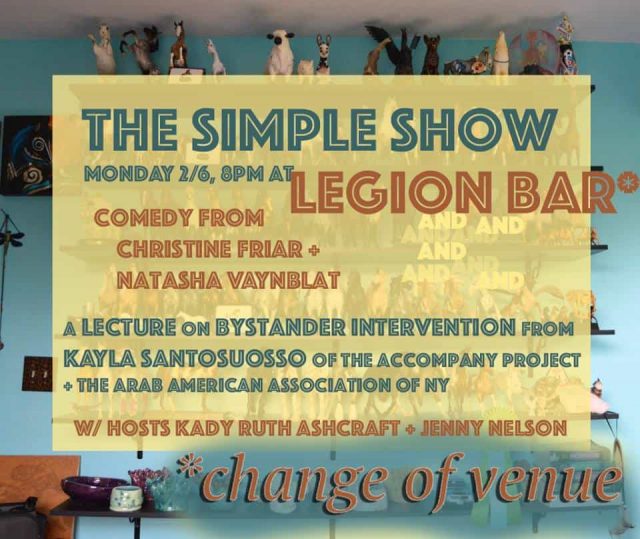 The Simple Show is back with jokes from Christie Friar and Natasha Vaynblat, plus a special lecture on bystander intervention from the Accompany Project’s Kayla Santosuosso. Come for the laughs, stay for the lesson on what to do if you witness someone being harassed in public.

Join thousands of high school and college students in a citywide walkout in protest of Trump’s policies. Students from across the city will be walking out of their classes at noon and heading to Foley Square in Lower Manhattan for a rally sponsored by the NY Immigration Coalition, the Arab-American Association of NY and MPower Change. 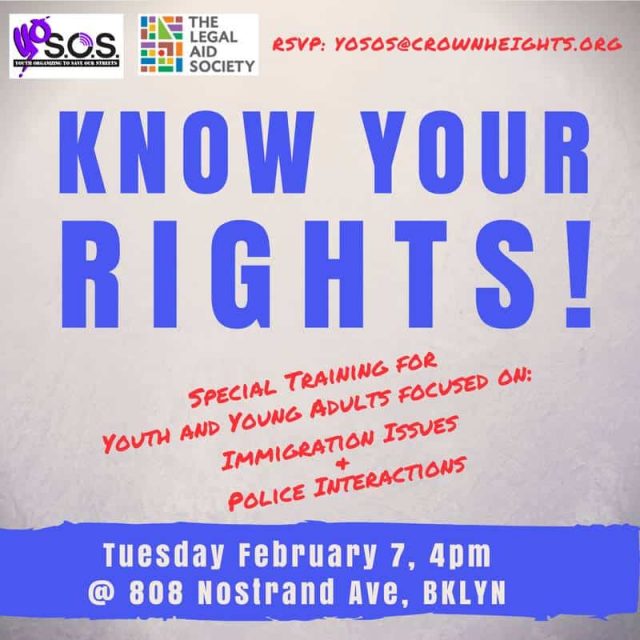 If dystopian young adult novels are any indication, teenagers are the leaders of the resistance. Youth Organizing to Save Our Streets and The Legal Aid Society are partnering up to train teenagers (and other young adults!) on their rights specifically related to police interactions and immigration. And, of course, there will be snacks.

Over the past two weeks, a group of dedicated postcard-writers have mailed more than 200 postcards, written over a drink or two, to our representatives. They have themed postcards, $5 beer and shot specials, and writing prompts for cards you can send anyone you think needs to listen–from Chuck Schumer to NASA. The event is free, but it’s recommended that you donate $2 for stamps and other supplies.

Meet other activists while enjoying some cool tunes at Starr Bar’s monthly music series. Each month, Mayday Space’s bar hosts two musicians who perform both covers and originals centered around a specific theme. This month: Julia Easterlin and Ashni will be performing and discussing artists’ social obligation throughout the next four years. 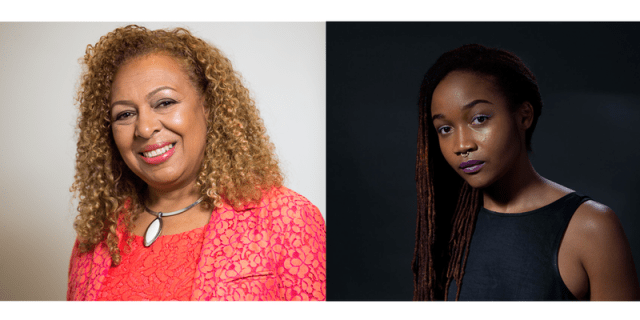 Art historian, curator, and 2016 MacArthur Genius Award-winner Kellie Jones will discuss her career, activism and vision for the future along with social media maven and blogger Kimberly Drew.

Before you head to the Party To Protect Your Parts, stop by Magick City for a $40 tattoos courtesy of Magic Cobra Tattoo Society. A few things to keep in mind: the tattoos are black ink only; tattoos can only be on your arms, legs, and shoulders; and appointments are first come, first served. In addition to heavily discounted tattoos by four of Magic Cobra’s artists, there will be performances by Panama Papers and Mic Raygun. All proceeds benefit Planned Parenthood! 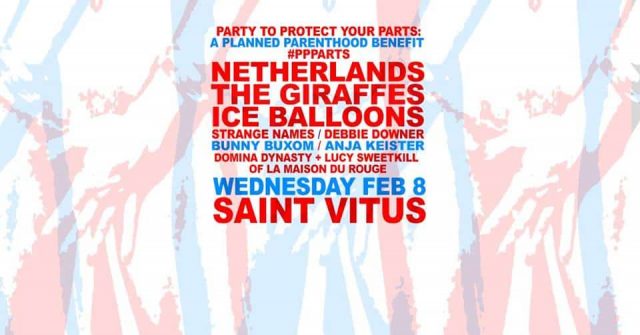 Maybe tattoos aren’t your thing. Or maybe tattoos are your thing, and after getting a cool new tattoo, you want to listen to some music and give more money to Planned Parenthood. The sets start at 7:15, but get there at 6:30 for $2 drinks until the show begins. Five bands —Debbie Downer, Strange Names, Ice Balloons, The Giraffes, and Netherlands — will be performing, plus there’s a raffle and burlesque performances from Bunny Buxom, Anja Keister and Celia Foxglove. 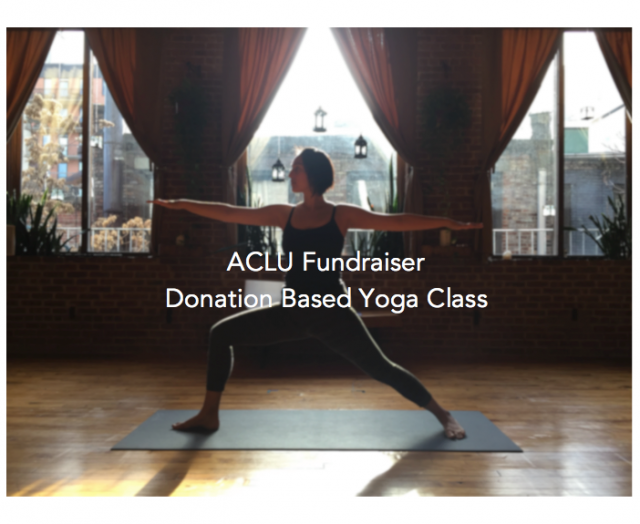 The constant barrage of bad news, terrible cabinet appointees, and illegal executive orders is enough to stress anyone out. Stretch your worries away at the Back to Work Collective’s yoga class benefitting the ACLU. You won’t just be raising money for a good cause–you’ll also get a chance to focus on nothing but stretching, breathing, and definitely not thinking about the news for an entire hour.

The Brooklyn Museum is hosting a panel of expert activists who will discuss how to effectively organize for immigrants’ rights. Panelists include the Arab American Association’s Linda Sarsour, the New York Immigration Coalition’s Murad Awawdeh, and Brooklyn Defender Service’s Lisa Schreibersdorf. 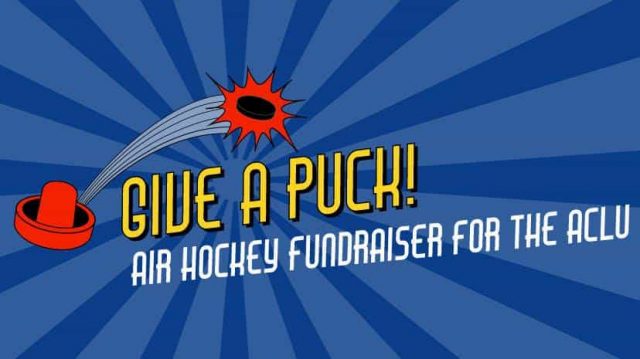 Come drink beer, play air hockey, and raise money for the ACLU with Give a Puck. Sorry for the cliché, but political organizing isn’t all fun and games (except for when it is, aka right now).

Trump’s Muslim ban may be the highest-profile case of Islamophobia in recent history, but the government targeting and scapegoating Muslims is nothing new. Learn about the past and present of the Muslim Ban and what we can do to fight back against it.

Panelists include journalist Mehreen Kasana; Moustafa Bayoumi, author of This Muslim American Life; Arun Kundnani, scholar-in-residence at the Schomburg Center for Research in Black Culture; and Rishi Singh, director of youth organizing at Desis Rising Up and Moving. If you can’t make it out, the event will be livestreamed on Verso Books’ and Muftah Magazine’s Facebook pages. 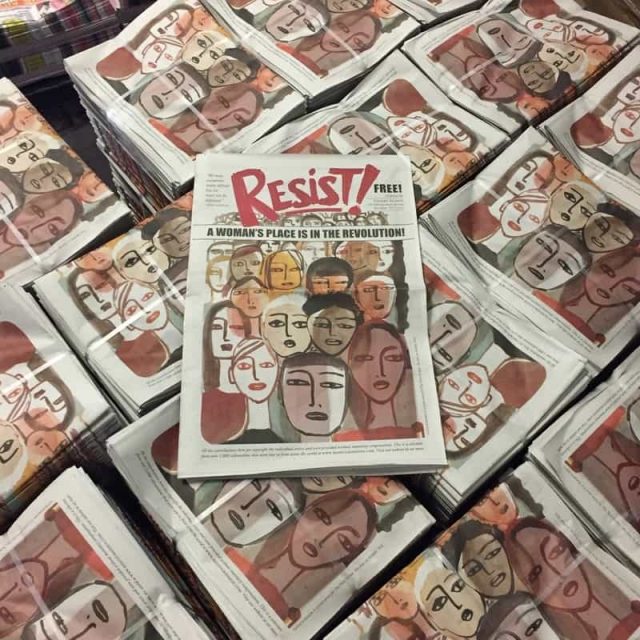 Desert Island Comic’s Gabe Fowler will be discussing “RESIST!”, a woman-centric comic/newspaper that provides commentary on Trump’s presidency. The publication is edited by Françoise Mouly, art editor of the New Yorker, and writer Nadja Spiegelman. Fowler will reveal the process behind RESIST!; the factors that compelled him to highlight diverse, creative women’s voices after the election; and the response the zine has gotten so far. A guest performer, still TBA, will follow.

In addition to food and art, there will be sets by Belinda Becker, DJ Scribe, tubafresh,; pop-up performances by Noelle Ghoussaini, Robyn Bob Hillman-Harrigan, and Aria Abere, and more. 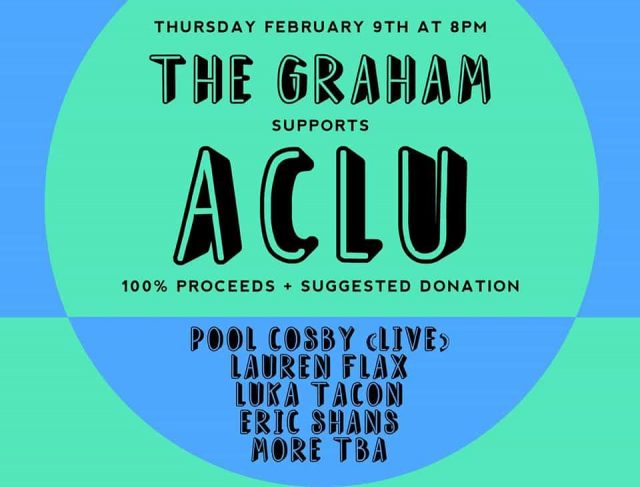 This dance party — featuring tunes by Pool Cosby, Lauren Flax, Luka Tacon, Eric Shans, and more — is donating every dollar raised to the ACLU. The party will rage on until 4am and the suggested donation is $20, although you won’t be turned away for lack of funds.

It’s been almost a full month since the Women’s March, but people’s’ enthusiasm hasn’t died down. Join fellow activists to come up with an action plan on how to continue the resistance, from blocking cabinet nominees and Supreme Court picks to preparing for what’s to come. If you want to form your own huddle, here’s how you can do so!

Early-bird ticket sales end Tuesday, but a limited number of tickets will be sold at the door. You can also drop a little extra money for a “love basket” gift bag, or $100 for a ticket, “love basket” and raffle ticket. 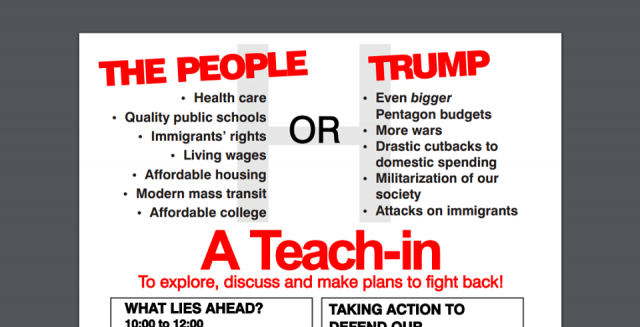 Join Fort Greene Peace and other activist groups for lunch and discussions of what lies ahead in Trump’s America. From 10 a.m. to noon, Professor Ervand Abrahamian and William Hartung, director of the Arms and Security Project at the Center for International Policy will discuss the future of the military and Pentagon priorities, war, and the Middle East. Lunch will be served at noon, followed by a second discussion on how to defend local communities from Trump’s policies. The event is free, but organizers are asking anyone who plans on attending to RSVP so they can get a headcount for lunch. 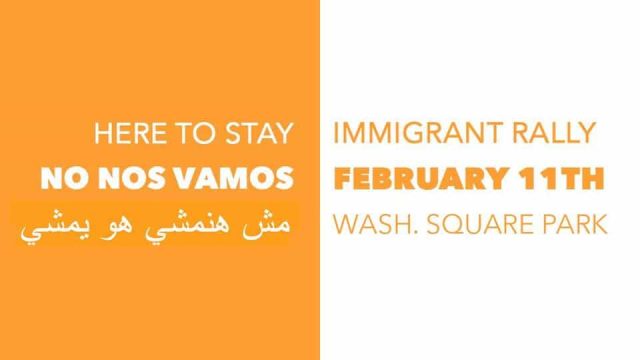 New York has declared itself a “sanctuary city,” but broken windows policing continues to leave thousands of immigrants vulnerable to deportation and targeting by Immigration and Customs Enforcement. Join ICE-FREE NYC and other activists for a rally in Washington Square Park to demand that the city stop broken windows policing, deportations, and mass incarceration in order to effectively protect immigrants from Trump’s administration. 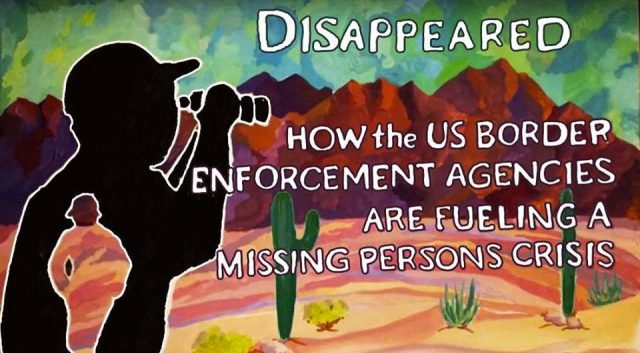 Desert aid workers from No More Deaths will be giving their firsthand accounts of recent migration trends, the human rights crisis in Nogales, supporting migrants in the Sonoran desert, and the building of an ally movement in Arizona. Their goal is to shed light on–and give a human face to–the U.S.-Mexico border and the people who cross it. There will also be a Q&A Session after the panel.

After a long week of resisting, you deserve to blow off some steam. Verso’s annual celebration of Red Day is the perfect chance for you to do just that, and maybe hang out with a socialist sweetie or two while you’re at it. Beer, wine, and communist books will be on sale all night long, and anyone wearing red gets 50 percent off. 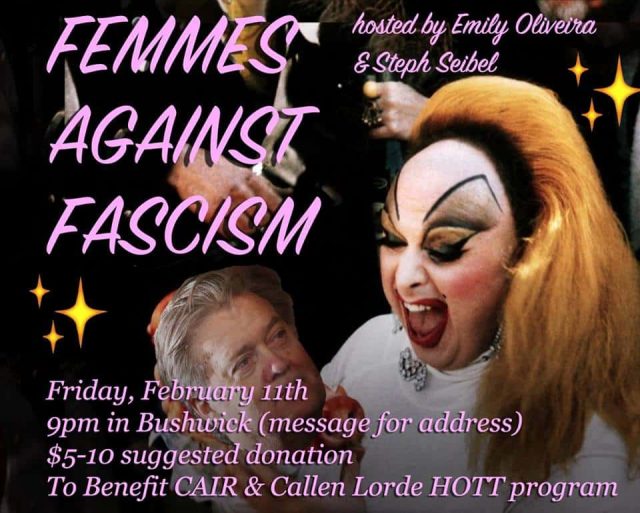 Bring clean, gently-used clothing and accessories to this femme-centered clothing swap in Bushwick . The event is free, but all money raised will benefit the Council on American-Islamic Relations and the Callen Lorde Health Outreach to Teens Program. There will be performances, zines, and art for sale, all by local artists. 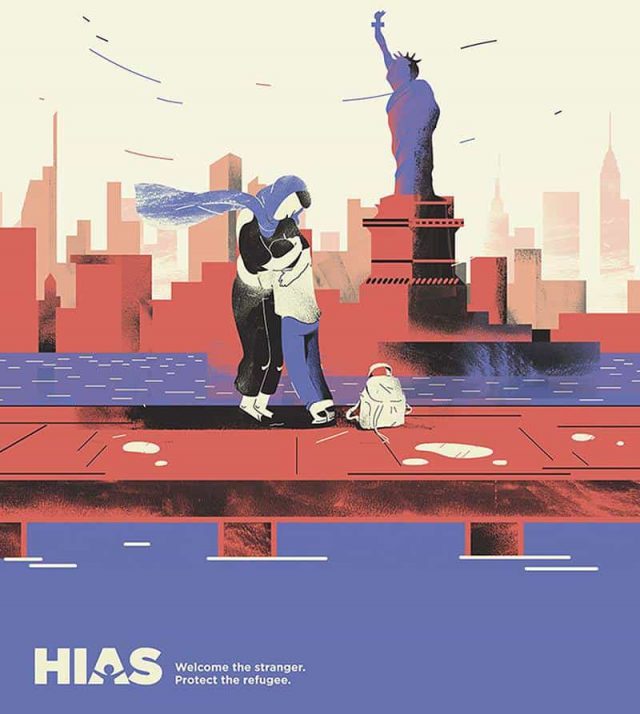 HIAS, the oldest refugee resettlement agency in the United States, is rallying the Jewish community in support of refugees on Sunday. In the ’30s, hundreds of Jewish refugees fleeing the Holocaust and anti-Semitic violence were turned away from the U.S.–in the words of HIAS organizers, “we cannot allow history to repeat itself.”

The premise is simple: make out in front Trump Tower on Sunday afternoon. Think of it as a kiss-in instead of a sit-in.

On the second Saturday of each month, organizers choose an issue to call and write to their local representatives about. February’s topic is racial justice — they’ll be talking and about protecting civil rights, supporting racial justice and Black Lives Matter, and writing to elected officials. Food and drink will be provided, but you’re encouraged to bring snacks, drinks — and don’t forget your phone or computer, post cards, envelopes, and stationery. Kids are welcome!

And, finally, here’s a video of Richard Spencer getting punched, set to Kanye’s “Father Stretch My Hands Part 1”:

Catch even more protests and events throughout the city on this Take Action NYC calendar.

If we missed any events, let us know! tips[at]Brokelyn.com.