As was promised yesterday, a group of protestors showed up in front of Vice’s Williamsburg headquarters, with the stated goal of levitating the building into the East River and sparking a creative rebirth in the neighborhood. Despite the goofy premise, despite the fact that it happened on a Tuesday and despite the snow that started falling about an hour before the attempt, a handful of spiritual activists (and their tiny children) showed up to try to dislodge 90 North 11th Street and lift it in the air with only their minds. Were they successful? Well, no.

The afternoon levitation attempt drew an odd crowd, made up of older bohemians, younger D.I.Y. scene vets, parents and their children and a man wearing a balaclava and a helmet with a foam stalagmite growing out of it, who went by the name Claude Debris and was once described by BuzzFeed as “The worst street performer in the world.”

The attempt started with creating what organizer Matt Mottel called “A Triangle of Truth,” made of old issues of Vice, into which cultural flotsam like a broken guitar, old Guinness, a guitar pick from Death By Audio and other items representing the snuffing out of Williamsburg’s creative culture were placed. Before the Triangle was filled, Mottel sung a brief dirge:

After the Triangle was filled, the gathered crowd continued reading from the provided program, reading Mottel’s own original incantation and pulling from the one that Fugs used in 1967 in their attempt to levitate the Pentagon. Once the whole incantation was read, three “attempts at levitation” were made, mostly consisting of making as much noise as possible, aided by homemade instruments, a wailing guitar and a whoopee cushion.

And now for a break and a brief gallery of a kid brought to the levitation who just wasn’t having it: 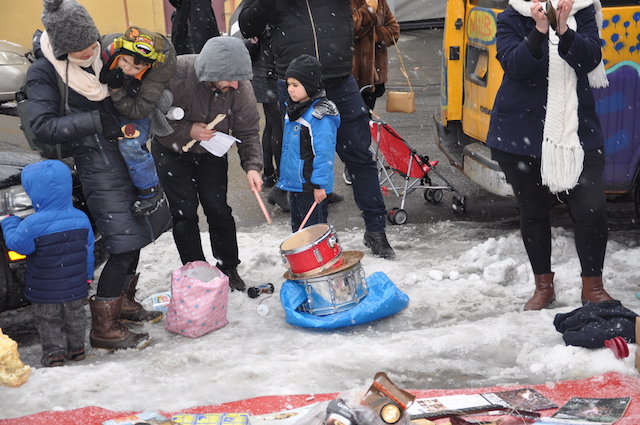 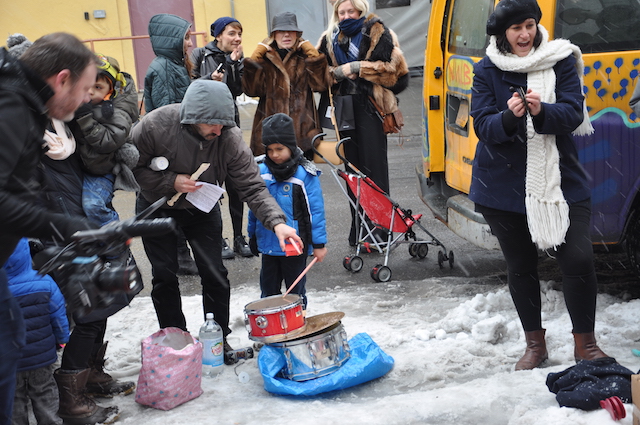 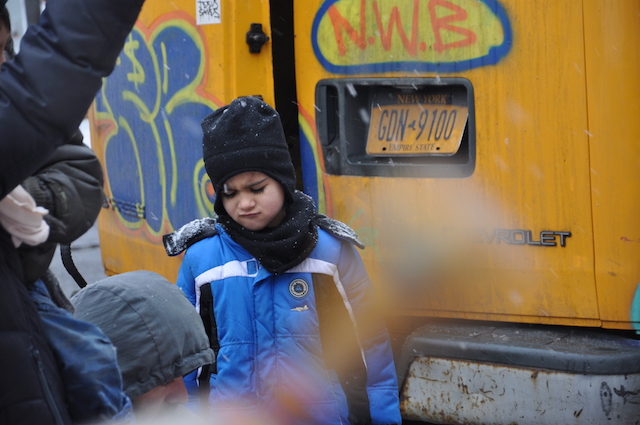 After three attempts were made to move the building, unsurprisingly the building hadn’t budged an inch. Mottel closed the afternoon by reading a quote from The Great Dictator focusing on greed and development versus kindness and humanity. Which, despite the fact that if the stated goal of levitating the Vice building into the East River had happened it would have killed hundreds of people, seemed to be more the spirit of the protest than any overt declaration that Vice was evil and had to be done away with. Claude Debris even made it into the building, telling the crowd he was determined to use the bathroom, before being walking out in defeat with dashed hopes and a full bladder, having been turned away from the Vice employee bathroom.

Steve Dalachinsky, who’s been involved with artistic and poetic movements since the late 60s, told us he was there because he’s seen the same thing happening in Williamsburg happen to where he lives “in a tenement in SoHo.” The Brooklyn native characterized the levitation as a call attempt to rebuild the cultural fabric of the city, which he was worried was falling apart. Dalachinksy also cast the protest as part of a larger fight, telling us that when one of Mottel’s friends asked Mottel why he protested Vice instead of a war, he told him that the destruction of culture in New York City “is another kind of war.”

As for Mottel, despite the lack of any building movement, he sounded upbeat about the day. “We all moved, we feel a little bit better having been a community response,” he told us. He also confirmed the story about characterizing this as another kind of war, and added that “We have an international development crisis. Moneyed interests are taking over cities and displacing residents. As artists, you have to have a comment on that.”

As goofy as it all looked, the chanting, the worst street artist in the world, the throwback to the days of the Yippies, Mottel sounded serious about his hopes to get Vice’s attention and talk about what their plans for their new headquarters is. “We have to have a real dialogue about what they’re going to do with that building,” he told us, calling the levitation “an attempt to start that dialogue with Vice.”

It was an odd day, that drew a few confused onlookers and some gawkers from inside the building, but given that “We’re gonna levitate a building” has the potential to be nothing but ironic pointless spectacle, it was refreshing and a little surprising to find that the day was a 100% earnest attempt to be heard.