Did you wake up hungover today and realize you spent all your money? Well the good news is, if you can scrounge up a dollars worth of coins in your couch cushion you can still eat today!

New York City is a magical place where you can get a $1,000 pizza with 6 kinds of caviar on it. Meanwhile, the pizza wars in Manhattan are driving the price down to 75 cents per slice in some areas! But most places in Brooklyn (which is, shamefully, home of the $5 slice) are clocking in at around $2.50. Anyone who’s strolled around the East Village knows that $1 slices are all over Manhattan these days, so where’s Brooklyn’s slice of the pie? We want to have our pizza and only pay a dollar for it too!

Trying to find a slice in Brooklyn at 1980s’ prices wasn’t super easy. Trendy areas like Williamsburg and Park Slope know they can get away with charging way more and so they do. Because I’m economically strapped, amazingly good at life choices, and because my body is a temple (the crumbling, ruined kind) I decided to go on an epic quest to find all of these mythical $1 slice places in our own beloved borough.

Obviously, in order to still net a profit on such a low cost-per-slice, some corners must necessarily be cut – less cheese and sauce per slice perhaps, or cheaper flour. That is to say, I wasn’t expecting the best quality pizza of my life. I hoped to find slices that would trend more towards “edible” and “satisfying” and less towards the “rat poison” end of the spectrum.

THE SLICES
Judging was based on structural integrity, ingredient ratio, and flavor as well as my highly scientific and not at all subjective gourmet palate. 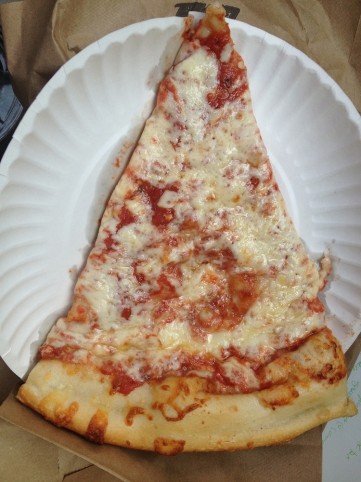 I’ve had slices from this chain many times on Saint Marks Place but this was my first venture into the Brooklyn location. The service is fast and friendly. Also, they keep the pizza in a warmer so it saves time and is the right temperature; if you’re impatient like me you get to eat it right away and not scald your mouth! Win/win.

The slices are adequately large and the cheese is better quality than you would expect. You get the impression that this is a “real” pizza place that just happens to sell slices for a dollar.

It’s not too salty; the crust is on the chewy side, but in a pleasant way, not a bad, rubbery way. 2 Bros. is tied with another for my favorite $1 slice. Recommend! 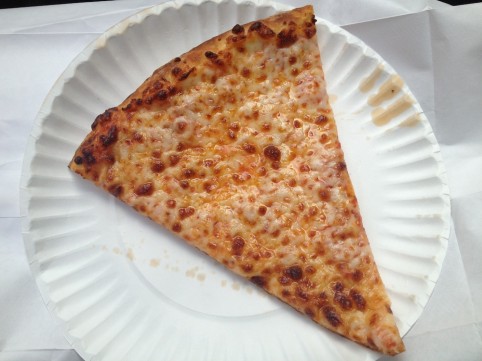 Dollar slices are a deal here only from 11 am until 6 pm, so you can’t discount it as a late night splurge/mistake. I’m never drunk enough by 6pm to eat at Papa John’s. Actually, I’m never drunk enough ever to eat here.  “Better ingredients, Better Pizza!” is a lie much like the one that Obamacare is going to raise pizza costs.

A prominent sign boasts that the slice is only 180 calories. Unsurprising, as it’s relatively small. This pizza experience was a really salty one. The crust was thin; there was buttery grease and lots of it.  They don’t skimp on cheese or sauce, but it tastes like that industrial-quality stuff I hate and reminds of the pizza I had growing up in the Midwest. Anything that reminds me of my childhood is gross. Essentially, this is chain pizza and tastes like it. Next! 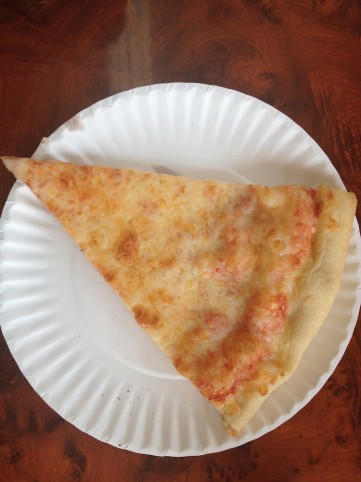 Did you get drunk and fall asleep on the A Train? Congratulations! You’re now way out in a place I just recently discovered exists. It’s called East New York. Reward your accidentally adventurous spirit and soak up some of that alcohol with a $1 slice from Liberty.

This slice was a little light on the sauce (which was fine with me because it reminded me of school cafeteria pizza sauce) but was definitely the cheesiest slice I had. I like cheese. The crust, however, was doughy, yeasty, and kind of undercooked. I was not able to fold it properly. Sadface. 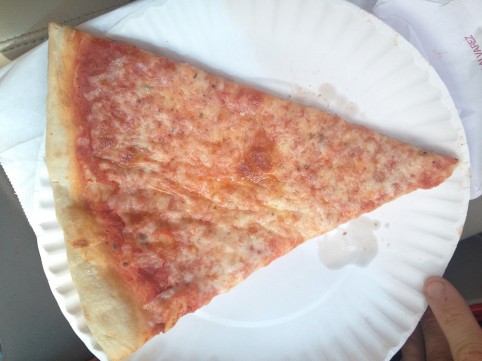 One of the best selling points for this place is its proximity to the 2/5 Line and the Q35. It’s right at that juncture where you switch between the subway and the bus when you’re going to or from our favorite cool kid beach mecca, Fort Tilden!

This was a really decent slice. The sauce was good; I could tell there was some kind of spice in it and you could see little flecks of green (Oregano? Weed?), unlike other dollar slices that seem to just dump out a vat of tomato paste. The crust was thin, crispy, and a little oily in the olive oil sense, not the loads of butter kind.

Overall I got good vibes from this store, which also sells yummy looking cookies and calzones.  I would rate this the highest out of all the slices I tried. 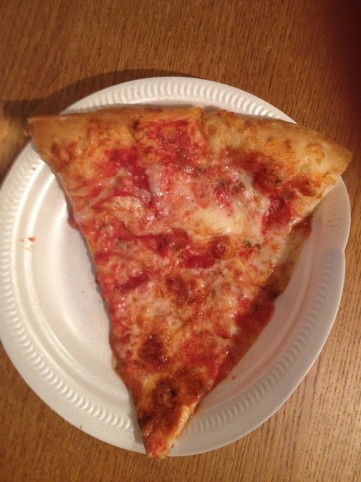 This was fresh out of the oven when i got there; the cheese was all melty and oozy, which is a huge plus, and makes up for everything else in my opinion. The sauce was really decent — I think the technical way to describe it would be “tomato-y.” The crust looked really fluffy but it was really hard to chew which was annoying. I didn’t take bites so much as tear at it with my teeth. 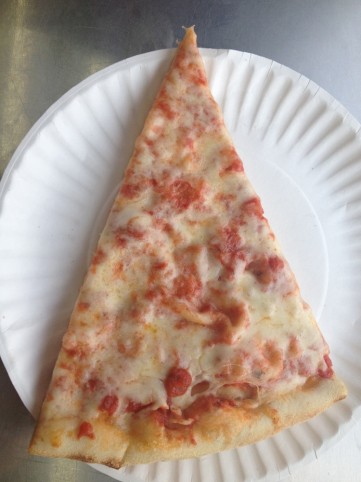 By far the worst slice aside from Papa Johns; the whole thing was floppy, droopy, doughy, and hard to chew. It had a weird after-taste and, out of what little I did put in my mouth, a good majority of it ended up stuck in my teeth. I couldn’t finish it.

“This is late-night-drunk only pizza,” confirmed my friend Delilah, who graciously helped me consume and critique this culinary masterpiece.

Sidenote: This place was issued a confidence-inspiring “Grade B” by the Health Department which cited them for “hand washing facility not provided in or near food preparation area and toilet room” among other gems. Enjoy!

The deal here is a $1 slice special from 2pm-4pm on weekdays. Because I wasn’t there during those times it cost more so I opted out. (For authenticity’s sake, and also I was getting full). Plus, the pies on display looked old and dry, like they had been sitting out for a while. I assume it would be fresher during the after-school rush.

I only found out about Bella’s a few days after I finished my epic quest. I didn’t try it because, at this point, I still never want to see pizza again.

SO WHICH SLICE IS WORTH IT?

One of the main conclusions I came to here is that $1 slices in Brooklyn, with the exception of the 2 Bros, are not the same caliber as what we’ve come to expect based on the $1 pizza boom in Manhattan. It’s also worth noting that all the places I managed to find (again, with the exception of 2 Bros and the Papa Johns) are way outside the Park Slope/Williamsburg/Cobble Hill/Prospect Heights area. It was quite an adventure to get to some of these places.

The best ones I tried were Uncle Vic’s and 2 Bros. That said, if you happen to be in any of these exotic locales and if you’re a starving and/or drunk person it gets the job done! Pro tip : Do not try all of these in one day unless you have a digestive tract of steel. Or a death-wish.

So, do you guys know of any other great $1 slice deals in Brooklyn? Have you had the pleasure of dining at any of these fine establishments? Let us know in the comments!

Follow Deena while she slices and dices your hunger: @spacedeenaleigh.