The Morbid Anatomy Museum was founded on the principle that death is a natural part of life that we should embrace instead of fear. Fittingly, the Gowanus oddities museum, event space, cafe and occasional taxidermy school abruptly closed its doors over the weekend, taking away a fitting place in Brooklyn to console ourselves about all the death and decay that has taken to consuming our lives this year.

The space, which grew out of a small library space in a shared building to its own massive street corner location two and a half years ago, didn’t make a public announcement of the closure, but a board member confirmed it to the Daily News today. It’s still unclear exactly what led to the closure, but it appears to be financial: last month, the museum launched a crowdfunding campaign to raise $75,000 to stay open (it only got about $8,000). The closing comes amid a particularly tough moment for the Gowanus arts scene, which has seen a rash of studio closures this year due to rent increases and new development.

We reached out to founder Joanna Ebenstein for more info so we’ll update if we hear back and if there are any future plans for the museum. Meanwhile, we mourn another New York City space for the strange and obscure and wonder, with morbid curiosity, when death will finally come for us all.

According to BKLYNER, collaborator Ryan Matthew Cohn promised this would not be the end of the space:

‘This is not the end of Morbid Anatomy, just a pause,” he wrote on Facebook. “There will be a rebirth in the near future. So all we can do for now is stay tuned.”

Here’s how some people are remembering the space:

Terrible news about the Morbid Anatomy Museum shutting down. https://t.co/fsQxFkedUg

Saddened to hear about the closing of @morbidanatomy – a truly unique space that will be missed throughout the city https://t.co/bxfivK64S4

I wrote about @morbidanatomy and its founder for @weirdnj a few issues back. I'm sad to hear it is closing. Hoping for reincarnation! 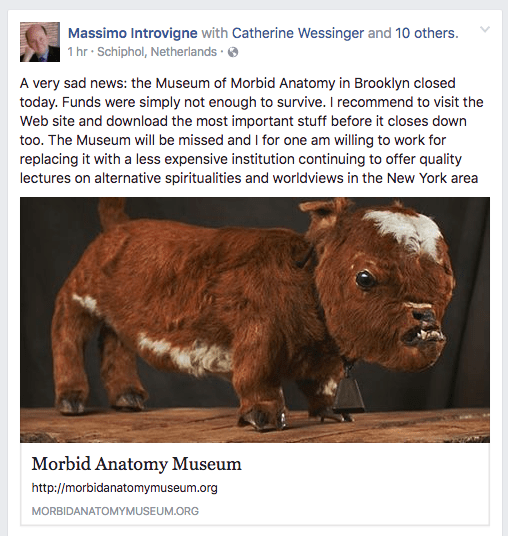 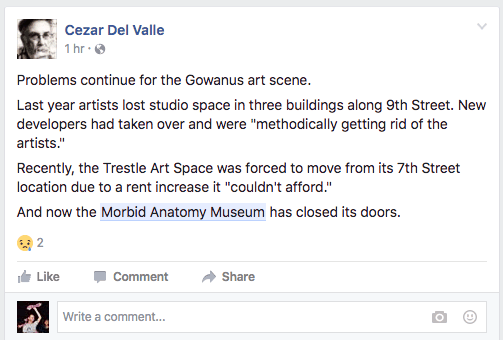 For some seasonal reflection, read our story from last year about why the Morbid Anatomy Museum thought Krampus was better for Brooklyn than Santa.