A throng of media and curious onlookers watched as the man in the giant protective suit, step by step, walked towards destiny. The historic achievement had been delayed by unexpected bureaucratic hijinks, but now it was only moments away. There was a pause, a deep breath and over the rail he went, making a gentle splash. After decades of pungent aromas, urban legends and a combination of scientific wonder and horror, finally, Man swam in the Gowanus and lived to tell the tale.

The man who broke the world’s record for longest distance swam in Brooklyn’s most polluted canal was Christopher Swain, a clean waterways activist who had previously pulled swimming stunts to call attention to the need for clean water. None of them, however, were set in the murky green waters of the Gowanus. Even before Swain could get his protective drysuit on, the day’s activities hit a snag when a property owner at the ass-end of the canal on Douglass Street told Swain he’d changed his mind about letting him shove off from his lot, forcing the start of the swim one block south to Degraw Street.

“You shoulda worked this out yesterday,” a construction worker called after Swain as he and the throng of reporters around him moved to Degraw. “Call it a day, come back when you got it worked out.”

Beyond having to move the starting point, the entire swim was threatened by the NYPD informing Swain that while he was free to jump in to the canal, he wasn’t as free to jump out. They wanted proof he’d been granted permission to come out of the water dripping with bacteria and chemical waste courtesy of the Gowanus on the private property he had arranged to make land on, and then decontaminate himself by dumping a bucket of bleach on his head. After a long negotiation with the NYPD, the officers on the scene were convinced the owner of the nearby Bayside Oil Depot granted Swain permission to come ashore there, and the swim was back on.

As Swain changed into his bright yellow drysuit, necessary to keep all of the cleansing waters of the Gowanus Canal from touching his skin, he fielded questions from a press scrum that ranged from the expected (“How are you feeling about this?”) to the sublimely ridiculous (“Are you afraid you’re going to get gonorrhea?”). 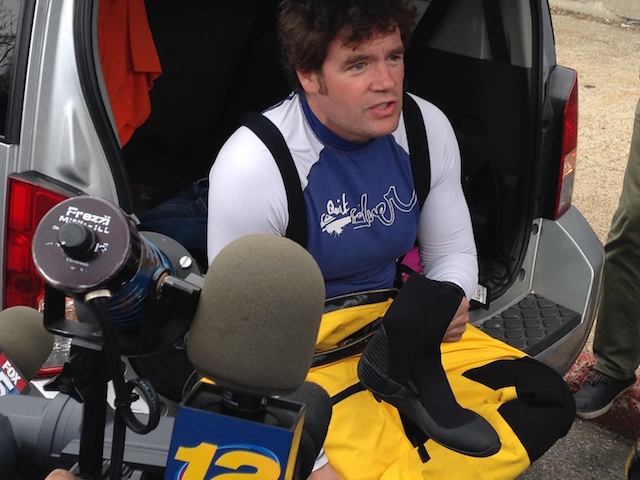 Eventually the hunger for action, and presumably the potential for Swain to melt into a screaming pile of goo, led a reporter to impatiently remark that Swain had a second press availability when he’d be surfacing on the banks of the Whole Foods, so stop distracting him and let him finish getting ready.

Which he did, but not before both a drone began hovering over the canal and an ice cream truck showed up on the east side of the banks, hoping to capitalize on the gathered crowd. The drone, the helicopters flying overhead, the gathered witnesses and the clutch of media gave the Gowanus the atmosphere of an Event, not seen since people breathlessly watched a dolphin struggle and die there. Finally, it was time to for the launch. Swain walked through a cordon of harbor police and NYPD community affairs officers, sat on the edge of the canal where a metal barrier meant to keep you out of the water curled a bit short, and stopped to put his flippers on.

With one small splash for mankind, Chris Swain was in the Gowanus Canal, and didn’t quickly become something like the Swamp Thing.

Swain paddled around a bit to audience applause, before beginning his swim south in earnest. With the toxic nature of the water making a traditional freestyle stroke all but impossible, Swain propelled himself with a modified breaststroke, trading the ability to get a push by fully submerging himself for not swallowing giant mouthfuls of sewer water. 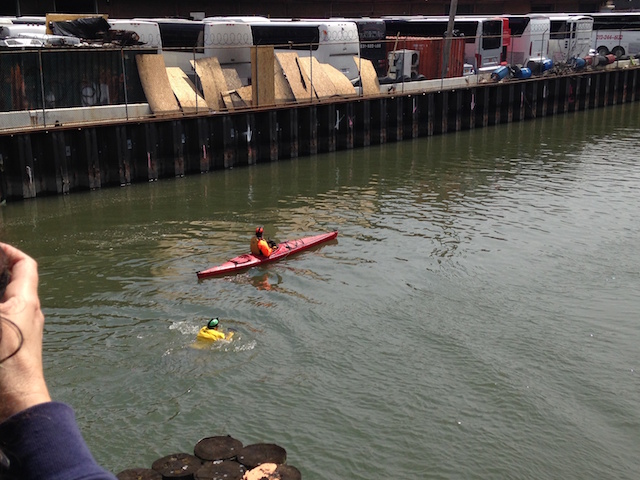 Slowly, he made his way under crowds gathered on the Union Street and Carroll Street Bridges. On the Third Street Bridge, a crowd that had begun forming at noon had swelled to two-deep while waiting to see Swain, and despite the delay, greeted him with cheers.

The delay though, would prove to be killing blow to Swain’s attempt. When he climbed out of the water, Swain said that the tide going down, as well as a coming thunderstorm that would fill the canal with its patented blend of raw sewage made completing the whole swim too dangerous for him to continue. He also answered a question that only he’d be able to answer: What does the Gowanus Canal taste like?

It was also so dark that he couldn’t see his hands in front of him while doing the breaststroke.  So while he’d only made it 2/3 of a mile, it seemed fair for Swain, a man who can now describe the Gowanus down to the tasting notes, to call his mission a success. The mission, Swain said, was to inspire people, to make them think about a day when they could swim just like he had, but without a yellow bubble of protection and needing to stop every few hundred feet to gargle with peroxide in order to kill floating bacteria.

“We deserve a sparkling Gowanus, a Gowanus that’s a jewel,” he told the assembled crowd next to the Whole Foods.

The dredging of the coal tar resting on the bottom of the canal is a nice start, according to the Swain, that only deals with part of the problem. Even with a lack of tar and other chemical pollutants, the Gowanus won’t be a pristine swimming hole anytime soon, if ever.

Swain is looking for the city to step in after the EPA is finished with the Superfund cleanup, with infrastructure upgrades in order to prevent sewage overflow from running off into the Gowanus, as well as an effort to add natural drainage and reconnect the freshwater streams that once ran into the Gowanus. Considering the message was delivered while Swain stood with a heap of scrap metal taller than some buildings looming behind him across the canal and the fact that it sounded incredibly expensive, Swain reached into our recent past in order to inspire people to think big.

“We put a man on the moon. We can clean the Gowanus,” he said.

Despite failing to complete the full 1.8 mile swim through canal, Swain vowed a sequel was in the works, and that he’d be back to finish the job on a day when the weather didn’t turn as nasty. So if you missed the first time a man swam in the Gowanus Canal, don’t worry, you might get another shot to see it. Just hope, for Swain’s sake, that the next attempt is more Apollo 12 than Apollo 13.