Today is the last day of February, marking the unofficial end of winter! Hooray! Then again, while March should bring higher temperatures and less bulky jackets, it’s also going to be bringing higher subway fares, with the MTA fare hike kicking in on Sunday. Uh, less hooray. Instead of just grousing about those clowns in Albany, No Fare Hikes, a group organized against endless fare hikes, has a better idea: swipe people in with your unlimited card while you’re walking out of the station. The protest is known as Swipe Back, and we talked to one of the organizers behind it.

Ingrid Burrington, a Brooklyn resident and freelancer is one of the main organizers behind the rolling protest. Swipe Back works simply: if you’ve got an unlimited MetroCard and you’re walking out a subway station, swipe someone else through who’s on their way in. In that way, you can help them boycott paying, while still allowing them to get where they’re going. Don’t ask for money for your swipe, though. First of all, it defeats the purpose of the protest. Second, and most importantly, once you bring money into it, swiping someone in becomes illegal. Do it for free though, and you’re well within your rights. You’re also a mensch.

Barrington told us that “this has been done before, but we’re trying to formalize it.”

No Fare Hikes doesn’t have a plan to hang around in subway stations explaining the tactic, but to spread the word, they’re giving out these buttons: 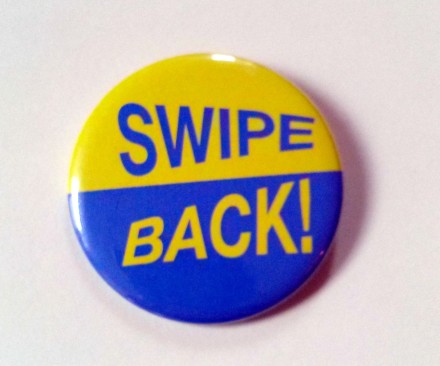 that will mark you as someone who’s involved with the protest.  Unlike the previous fare hike protests, this isn’t going to happen for just a day or a couple of days.

Barrington also said No Fare Hikes “is in it for the long haul,” especially since there are fare hikes planned for every other year up until the end of time.

No Fare Hikes is realistic about police or station agents finding this suspicious, so if you do find yourself in trouble, contact the National Lawyers Guild at (212) 679-9718, who was No Fare Hike’s back on this one. And if you see this going down somewhere, let us know.