On Tuesday, an animal shelter in Muncie, Indiana put out a Facebook ad calling for Pokemon Go players to volunteer walk their shelter dogs, which has since gone viral. The shelter director Paul Peckinpaugh got the idea after seeing hordes of folks out and about all over the city chasing Pokesmon.

“It would be great if every one of those individuals had our dogs with them,” he told the Huffington Post.

On the one hand, it makes sense to merge the two — dog walking and Pokemon hunting. If Pokemon Go players are logging so many steps on the hunt for Pikachu anyway, why not give them something real to accomplish while they’re at it, like contributing to the greater good by getting a shelter dog some exercise? Dog owners who play Pokemon Go are constantly bragging on Twitter about taking their own dogs on frequent and longer walks to track down invisible monsters, as though their pets were their prized crime-fighting sidekicks.

But, with leash in one hand, phone in the other, eyes squinting into the screen, head in a virtual world, they may actually be putting their own dogs at risk. And it’s certainly not smart to give a distracted, game-crazed novice responsibility, albeit temporary, over a vulnerable, anxious shelter dog, veterinarians and dog experts told us.

“In general, people don’t spend enough time looking at their dogs when they’re walking them, so it would be hard for me to wholeheartedly get behind something that distracts people from their dogs,” said Anna Jane Grossman, founder of the School for the Dogs  in Manhattan. “When you’re walking with dogs, you have to always be braced for the worst case scenario.”

Grossman had another good point: “Shouldn’t walking a dog be fun enough? Do we really have to add in Pokemon?”

Tracking down new Pokemon characters requires constant, frenetic movement, and players are rewarded the farther they travel by having new eggs hatched. The game demands a lot of attention that the basics of dog walking—stopping to let your dog sniff or relieve itself, crossing the street to avoid an aggressive dog—would surely interrupt.

We wondered about the safety concerns of this behavior in New York, especially, where the sidewalks are crowded, traffic is a constant, and the temperature’s climbing into the 90s. We asked local dog trainers and vets to weigh in on the risks behind this increase in dog walking, but potential decrease in focus — and they’re not fans of people using their dogs as excuses for exhaustive Pokemon hunts.

Anthony Newman, the founder of Calm Energy Dog Training in Brooklyn, told Brokelyn that “NYC dog owners and walkers need to be on their A-game during leashed walks,” whereas in suburban Muncie, Indiana, there may be fewer distractions.

He did say that he’s “in favor of pretty much anything that gets more rescue and shelter dogs outside being physically active, playing and socializing with other dogs and people,” and if Pokemon Go is the catalyst, so be it.

“We don’t think it’s a good idea,” said Robert Vazquez, who manages volunteer dog walking at the Brooklyn Animal Rescue Coalition. “Since pokestops reset every five minutes, people doing this will just walk back and forth to get better stuff from the game, not really benefitting the dog as the walker is distracted. All of our dog walks are one-on-one, it’s about socialization and spending time with the animals, not about some trendy game.” 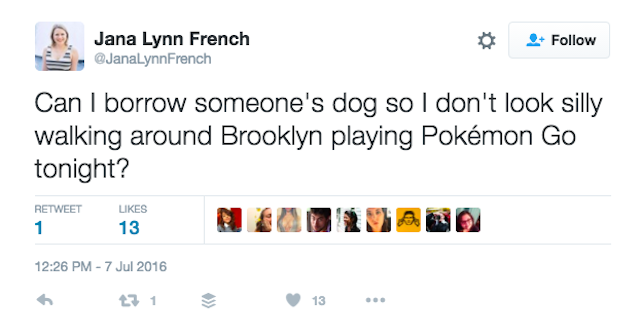 Dr. Stephanie Liff, a veterinarian at Pure Paws Veterinary Clinic, which has locations in Brooklyn and Manhattan, shared what can go wrong when dog walkers get distracted.

“I think the primary concern in New York is the paying attention,” she said. “In Muncie they may not have the traffic issues that we have, but at intersections here, cars cut it a little close making turns, and I’ve seen dogs get injured while crossing the street—if you’re not paying attention, that could happen more easily.”

When we asked her if over-walking a dog in this kind of heat was a safety concern, she made the distinction that “excess walks aren’t the problem, it’s the duration of them. If owners are going on walks to the point that the dog is panting without the ability to recover, that would indicate that they’re overdoing it.”

Maybe the NYPD should add “Do not walk your dog while playing Pokemon Go” to their list of Pokemon Go safety tips.

Brooklyn dog owners, what do you think? Let us know in the comments!