How directly linked are juice bars and white guilt? A new video short, “Park Slope”, indirectly asks this question through what co-directors Aditi Kini and Hanna Edizel describe as an “absurdist thought experiment” involving high-res sequences of fruit being squished and white people smiling at baguettes. The video, Kini told Brokelyn, was inspired by the ever rising prices of pretty much everything in Brooklyn, especially the juice bars that have been inexplicably springing up, as well as a performance piece by the video’s rapper and producer OHYUNG in which he threw steak – a metaphor for white men’s flesh – at the walls of Ridgewood venue Trans-Pecos.

“What is Park Slope but a petri dish of neofeudalism, gentrification and privilege?” the artists ask in a statement on the video, “Park Slope.” The release continues:

“Park Slope” the video interacts with the absurdist, multicultural music of rapper OHYUNG to tell the somewhat disturbing tale of the most Park Slopeian thing, after black, yellow, brown babysitters: The Cleanse. Why the obsession with being so clean, asks the video, almost cutely. What indelible dirt has lead you down this path? Might it be the cancer of privilege? Does your white guilt subliminally prevent you from enjoying your egregiously lavish lifestyle to the fullest? Where does the cleansing end?

Kini’s strong and nuanced feelings about gentrification don’t stop at the press release. “Artists create these really beautiful spaces for creativity, especially in North Brooklyn,” Kini told us over the phone, “It’s not cool unless the artists go there first, and then the yuppies and tech bros infiltrate these buildings and communities that have been around forever.”

She went on to recall an experience she had with a broker who refused to use the word “gentrification” to describe what he instead referred to as, “these new buildings are springing up and there’s so much more housing.”

“From his perspective,” Kini said, “there is more housing, the right kind of housing, with the renovated kitchens and the rich people moving in. But there’s so much more invisibility. There are people whose homes are being taken away.” 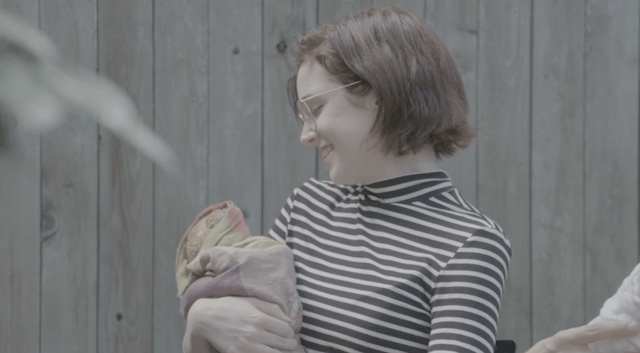 “Park Slope is a petri dish for everything bad that’s happening in New York,” she went on, noting that, not being from New York and having moved here, she considers herself an “active gentrifier”.

While she’s since moved from the area, she says she felt the least like a gentrifier and the most comfortable when she lived in East Flatbush, “off a bus,” where “there were no juice bars.”

Lastly, we discussed the racial dichotomy of part and full time babysitting, and how most of the white freelancers she knows have a side hustle of babysitting gigs while the non-white freelancers work in the service industry to supplement their art.

Oh, and that clip at the end of the video? It’s a Japanese sample of a girl crying about her hormones added in by the song’s Tokyo-based producer. If you dig the audio but not the visuals, give the track a listen on OHYUNG’s SoundCloud.