The Prettiots are comprised of Kasperhauser, who grew up in the West Village, and Lulu Landolfi, who was raised in Brooklyn. Their debut album, Funs Cool,  came out Friday on Rough Trade records. If you were smart enough to preorder it, you got a sweet Prettiots lip gloss AND a sheet of temporary tattoos hand drawn by Kay. And let’s just say this: they are adorable. Their music is sweet and fun, but with an often heart-wrenchingly honest voice that speaks to dealing with the darkness in the world. They also have an amazing dream pop Misfits cover with “Skulls,” and the world’s premiere love song about a fictional TV detective in pop ballad “Stabler.”

The origin of The Prettiots is essentially every band’s dream. Kay and Lulu met through a mutual drummer friend and started playing together about two years ago, in which time they gathered all their pennies to tour down to South by Southwest. They played some gig down there, during which they caught the eye of Rough Trade head honcho Geoff Travis.

Kay says that the honesty and sweetness in her music is just kind of how she goes about life in the world; she’s lived a long life, getting sober before the age of 20, and this is how she counteracts the dark parts of it.

“It’s a pretty dark place out there,” she says. “That’s the only way I really know how to deal with it.”

For a prime example of this honesty, check out little ditty “Suicide Hotline,” which has lyrics like: “Woolf took a dip with some rocks in her pockets/I’d say comparatively I’ve got a bad case of the fuck-its.” Couple that with a sweet, simple ukulele riff and Lulu’s harmonic “Ooh ah ooh” in the background, and you’ve got a staple Prettiots song.

If you’ve listened, you’ll hear drums. Someone has to play the drums, right? In most cases, for the Prettiots, that’s Rachel Trachtenberg. If you’ve been in New York for long enough, that name will sound familiar, and it’s because Rachel was the little girl drummer in the Trachtenberg Family Slideshow Players.

Kay and Lulu have been writing together for about a year, and they write songs about real stuff.  Dating struggles, heartbreak (18 Wheeler forever), mental health, and the all important Law and Order SVU. If you’ve ever seen the show, or even if you haven’t, PLEASE listen to “Stabler,” which has the lyrics:

“You look so good while gathering evidence/the crimes that brought you here now seem so irrelevant/you left your finger prints all over my mind/defensive wounds from fighting how I truly feel inside.” Pure poetry.

So since I ask the tough questions here at New Music Tuesday, I asked Kay what her favorite episode of SVU is. Apparently, there’s an episode in which Stabler and Benson go undercover into some weird vampire death cult (the way one does), while Kathy Griffin struggles with her identity as a lesbian activist. I haven’t seen this particular episode, nor do I know whether or not Kathy Griffin was a lesbian and also a vampire, but now it’s my favorite, too. 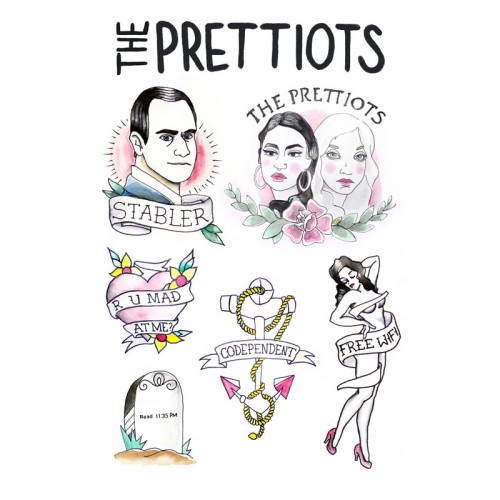 Even if you didn’t get to preorder their record and get those sweet, sweet temporary tattoos, you should totally check out The Prettiots at their post-album release show, this Friday (2/12) at Alphaville in Bushwick.

Check out The Prettiot’s new video here too: