Mulholland’s has always seemed like a bit of of an odd outlier in Williamsburg. It’s a straight-up sports bar, with a wall of TVs and a kitchen serving up chicken wings to big Sunday football crowds. It would feel slightly more at home in Midtown, not on Grand Street down the road from the Skee-Ball bar and around the corner from the pinball bar. When it first opened 10 years ago, Brooklyn Paper said it “felt more like a bar in a strip mall;” the Times called it “probably the first place to be so completely dedicated to sports” in the neighborhood. It opened near the tail end of peak artsy Williamsburg, when the neighborhood was still the butt of fedora and kickball jokes. Muholland’s seemed, for lack of better terms, an oasis for bros in the hipster desert.

Then a strange thing happened: the neighborhood changed. Trash Bar a few doors down closed; vegan fast food joint Foodswings across the street turned into a wine bar owned by James Murphy. The condos came in and so did the chain stores — and chain bars. Mulholland’s has always been embraced by a diverse clientele, but now it seems almost quaint amid the change, a stalwart of slightly older Williamsburg as the neighborhood becomes a mini Manhattan.

“We stuck in there kinda just being the originals,” owner Shawn Mulholland said. This weekend, the bar is celebrating its 10th anniversary with three hours of free beer and a night of music from Brooklyn-born artists. Mulholland has seen his customers change a lot over that time, though he doesn’t know if the bar has another 10 years left.

The Mulholland’s bar space was a “grimy metal bar” before Mulholland and his brother took it over. They found a gun downstairs in the office, and a sheath underneath the bar to hold a giant knife (which is still there, Mulholland said).

In those first few years, when Williamsburg had a much less professional aesthetic, Mulholland remembers a record-scratch moment when a guy walking in wearing a suit.

“35 people who don’t know each other start laughing,” he said.

He opened the bar with an eye on the changing area, as it grew from working class neighborhood to trendy outpost to whatever it is today. He saw a need for a dedicated sports bar in the hood (or at least one with pub food, which other long-standing dives like Turkey’s Nest didn’t provide).

The spot didn’t make itself anything more than a sports bar, which was good enough — watching sports and getting tanked can act like a great uniter between hipsters and bros. In 2012, the Times called it “a place where bespectacled artists can rub tattooed elbows with the most die-hard jocks, surrounded by 13 high-definition televisions and immersed in an endless flow of beer and Buffalo wings.” In 2011, Robert Lanham (founder of FreeWilliamsburg, author of the Hipster Handbook) called it one of the city’s best sports bars for foodies and the sports-averse on The Awl.

“What we’ve always like about the artist people, they kind of stuck it it out a little bit,” Mulholland said (the same advice we gave in the end of this post, btw). “We also have the alpha dickehead sports jocks who like Williamsburg since it’s artsy.”

Mulholland is a Long Island native who moved to Bushwick last year, but lived in Williamsburg for 12 years before that. He’s got two kids, a 3-year-old daughter and a 1-year-old son, and a few tattoos, but they’re only of liquor bottles and bar equipment — an indication that working in bars is going to be his calling for a long time.

He doesn’t agree with the trope that Midwest transplants are ruining the borough/city: His bar has been a Kansas University outpost ever since a fan came in and requested to make it an official KU bar eight years ago.

“I love the Midwest people,” he said. “Even if I throw up an ad for Craigslist, the amount of people I get who are from New York is none. New York is filled with everybody else.”

He’s got 14 years left on his lease, but he’s bracing for the wave of change to eventually claim his building. He’s had a few buyout offers already.

“I think every bar in America is for sale,” he said. “I love what I do, I love my job. It’d have to be really good. I’m never not doing this.”

So for now, the bar is celebrating its 10-year mark on Sunday, with free beer and other drink specials, and music from only Brooklyn-born artists starting at 9 p.m. And to be sure, the bar is cozier than your average midtown pub: two of your Brokelyn staffers recently drank heavily there while watching college basketball, one of whom got too drunk to stay awake for a late Deadpool screening.With a fireplace in the back and a long, welcoming bar, it beats some of the chain restaurants that have cut into its clientele. Even if that clientele is changing.

“On a Friday night, I have more suits than flannel,” he said. “Now you have to go to Crown Heights to find an artist.” 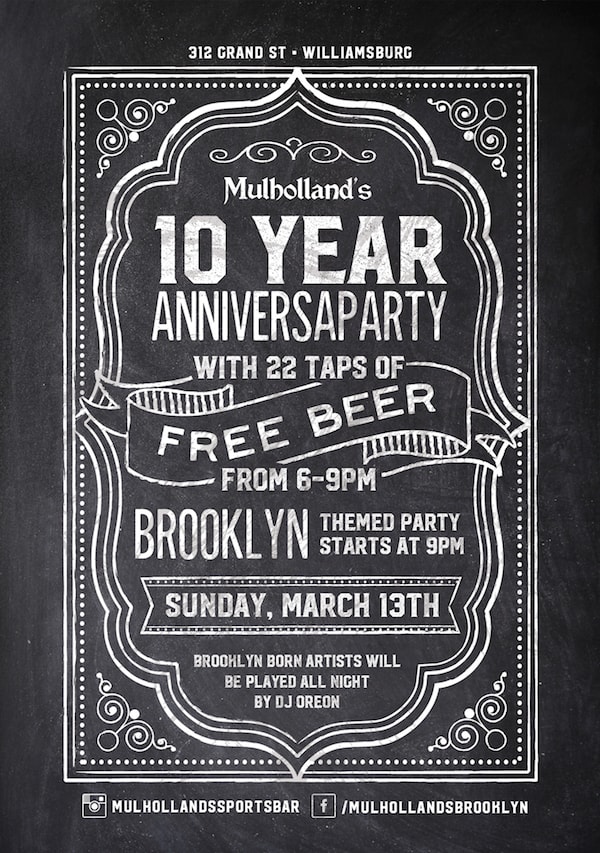 Mulholland’s is at 312 Grand St. in Williamsburg. Find more info on the 10 year anniversary party here.