The MTA frequently reminds you through official signs that a crowded train is not an excuse for unwanted sexual contact. While most commuters heed the message, it seems not to have gotten through to the Republican candidate for president, who is responsible for bringing a conversation about “is groping cool or nah” into the race for the most important position in the world.

So someone made this official-looking MTA sign as a reminder to him, and anyone, that you shouldn’t grab women by the anywhere, no matter if you’re commuting to work or hosting a reality show. Friend of Brokelyn Emilio Herce spotted this last night on an uptown 2 train when he got on at 72nd St. last night and sent it to us. It’s unclear who made it, but the MTA confirms it’s definitely not them.

“Clearly, this is not an official MTA poster,” an MTA spokeswoman told us. “The appropriate NYC Transit divisions have been notified. If seen, they will be immediately removed.”

Unwanted Sexual Contact shouldn’t be a part of anyone’s commute. Or their job. Or their life.

A crowded train is no excuse for unwanted sexual contact Neither is being a rich guy with a TV program. Women have the right to commute, work, and live without being harassed or touched in a sexual manner without consent. By Rreporting an incident, women are letting violators like Trump know that pussy bites back, and fights back.

Report it to an MTA employee, police officer or a reporter.

Trump is really getting clowned on all over the subway this year: In May, someone put Trump head stickers on all the etiquette posters, because you just know that dude is a manspreader. 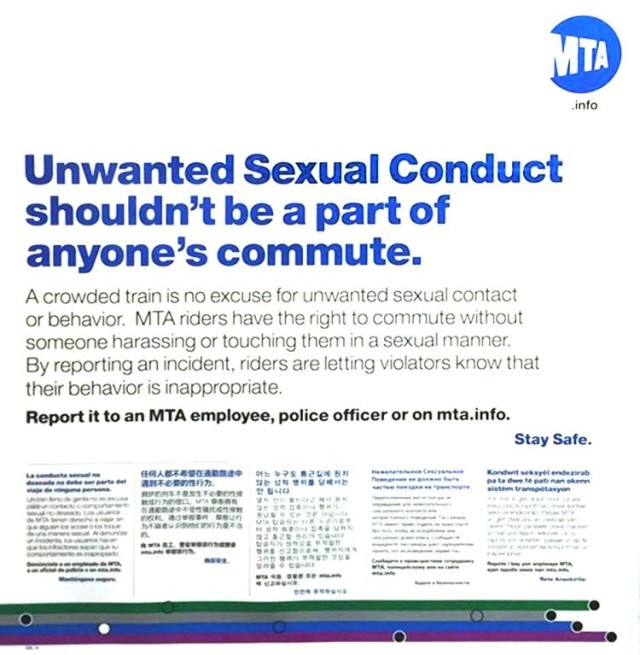 If you know who made this fake MTA sign, get in touch! tim at brokelyn dot com.