In the midst of all this political razzmatazz where Hillary is tripping (literally) and Trump is mongering (lying) you know what Brooklyn needs? Socialism! Or at least a jolt of philosophical thought from the mother of all leftist political book-sellers, Brooklyn’s Verso Books, which is holding a huge 50 percent-off sale right now. You can get books that are 100+ pages of feminist thought, social critique and architectural analysis for as low as $5. Are we lighting your liberal arts souls on fire yet?

Pick one of those categories and design your own curriculum. With titles like The Sublime Object of Ideology, Playing The Whore: The Work of Sex Work and Profiting Without Producing: How Finance Exploits Us All, Christmas came early for the disillusioned political philosopher in your life.

Bust out your sad little Nook, the Zune of e-readers, as many of the titles come in ebook form. If you’re still into actual paper, sniffing books and all that retro stuff paperback and hardcover editions are also available. All the books can be purchased online, and it ends at midnight Sunday (Sept. 18). 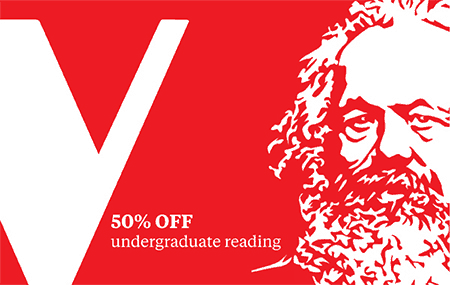 Even if you’re not in school or politically aligned to Karl Marx, it’s still super important to expose yourself to differing views. Taking in information that’s only compatible with your beliefs is the way to turn into Rush Limbaugh. Making connections between seemingly different ideas is the definition of creativity. Fuel your creativity. Be the sapiosexual you claim to be on Instagram. Arm yourself with the knowledge to verbally spar with that annoying self-aggrandizing middle-aged philosophy major in your food co-op (there’s always one).

If you’re in for some more Utopia-loving, the editor of Jacobin magazine, Peter Frase, imagines what a world without capitalism would look like for a discussion at Verso’s headquarters on 20 Jay Street on Oct. 13. If you were bummed when Bernie didn’t get the nomination (heck, if you thought Bernie didn’t go far enough), this is the talk to catch. This is a professor who once pontificated on whether capitalism killed the Twinkie.