John Early and Kate Berlant are a comedy duo of odd and odd that add up to a perfectly symmetrical monolith of millennial anxiety. Often, two high-energy performers will compete with each other while sharing stage or screen, but not these two. One’s flamboyance complements the other.

For years, John Early has been honing his sharp comedic wit that often takes aim at the self-aggrandizing antics of the social media obsessed generation. He’s perhaps best known lately for his character Elliott in Search Party on TBS, a particularly manipulative and narcissistic Brooklyn hipster who joins a band of friends in their search for a missing person.

Kate Berlant likewise has been channeling her sensitivity to the human desire to be something, to be taken seriously into her stage persona, notably her monthly UCB (the one in LA, sorry New York) show Communikate and her memorable performances on the Netflix series The Characters, also featuring John Early.

Together they form a sort of Voltron of Gen Y frustration, finding themselves powerless against the current of time and the facts of life despite being incredibly smart and informed, perhaps too smart and informed for their own good, and making it funny. Really damn funny. I had the pleasure of seeing both of them individually back when they were lighting up the Brooklyn comedy scene. They’ve since relocated to Los Angeles but continue to convert 20/30-something angst into complex characters with equal parts ridiculousness and pathos. If you’ve been enjoying the Brooklynite-skewering shenanigans of Search Party, check out the duo’s new Vimeo series 555.

Here, Berlant and Early take on the West Coast, (and if there’s one thing New Yorkers love, it’s taking swats at LA). It’s less a straightforward narrative and more of a foggy, neon fever dream. The show, which just dropped exclusively on Vimeo last week, is five short stories, each loosely connected around different pairs of characters as they struggle to cling to the butt hairs of a surreal, somewhat creepy Hollywood. Even the show’s title, 555 is a reference to the fake phone numbers given out in movies, a nod to LA culture’s glib phoniness, paper-thin set walls, spray tan, implants and power lunches.

I spoke with them about their show, their dynamic friendship and their thoughts on the role of iconoclastic artists in threatening times.

What was the impetus to create this series?

John Early: The first short was an idea we’ve had for a million years, loosely based on the story of Debbie Deb, the singer, she got screwed over with her recording contract when as a young girl…but we saw that story and that song, the moodiness but also the fun of her hit, “When I Hear Music” as a tonal starting place for something that’s campy but also sort of a Hollywood archetypal, All About Eve, but set in a more decaying mall, dregs-of-Hollywood setting. That concept was super exciting to us but we knew that it could only really work if we had a budget. and at that point in our collaborative friendship, there was no one trying to pay for stuff that we wanted to make. We were just doing it ourselves with our friends.

Kate Berlant: That’s also where we met Andy (DeYoung) who directed 555. We’d made all these videos just the three of us.

JE: He’s very scrappy, good at figuring things out on the day of shooting. He really helped fulfill these dreams of ours, turning our behavioral comedy into something a little more lush and filmic. We thought there was something so funny about seeing these characters who were sort of deluded and a little oblivious in this hypervisual dream.

The first assertion people make about 555 is that it’s about the seedier end of Hollywood culture, but what I found it really zeroed in on was desperation. How did you come to all these characters from different occupations and vantage points in the entertainment industry who all seem to have this same emptiness?

JE: It wasn’t really intentional, Kate and I when we do stuff together, the main joke of what we’re doing is people who are trying to assert themselves very boldly and confidently and the fear is right behind their eyes. Despite their very potent terror, they’re performing these very bold versions of themselves. Hollywood just became a perfect setting to play a bunch of characters like that.

It just so happens there’s a lot of broken people in Hollywood.

There’s a lot of different stylistic influences on the show, Tim and Eric were executive producers, their presence is palpable. I felt strong vibes of Todd Solondz (director of Happiness, Welcome To The Dollhouse and Palindromes) and the way he can make you laugh at something you know you shouldn’t.

JE: He was a huge influence of ours prior to becoming friends.

JE: We used the Palindromes poster in our lookbook for the whole series, we wanted it to have this feeling of fairy tales, these trashy Hollywood people in these surreal experiences.

KB: And I think the way Todd Solondz treats his characters, who are somewhat despicable or hard to watch and heartbreaking, he handles them with such tenderness and love, he doesn’t inflect any meanness.

JE: Even though it’s often misinterpreted as that,

KB: I think we both relate to being misinterpreted in that way.

JE: The exercise of all his work comes down to “can you feel compassion for someone who’s been completely rejected by society?” Each of our shorts has a moment when you can possibly feel compassion for these characters.
How do you find that balance of snark and compassion when you’re handling these vulnerable characters: a girl in a wheelchair, a blind guy, a child who’s possibly illiterate?

JE: We definitely, when we were doing these were like “Okay, here come the thinkpieces,” but they’ve yet to come, probably because no one is watching the show. The reason we go through with those things, even when there’s a dawning fear of “oh god, will we be accused of being ‘problematic'” is because we know that we’re playing them with tenderness. The blindness in the agent (character) though I’m absolutely playing for laughs and physical comedy, ultimately that short is about their friendship and how the blindness provides this weird new opportunity for them to reach a new level of intimacy.

KB: And my character in the wheelchair, she’s the one with the raw talent that this desperate person of privilege is trying to literally oust out, but at the end she’s rising from the ashes to go seek justice.

JE: At first we were really interested in these saturated Hollywood archetypes, like Whatever Happened to Baby Jane, Joan Crawford in a wheelchair, like the innocent person because of their limited mobility gets taken advantage of by someone who’s psychologically dysfunctional and evil. The blindness felt like such Greek tragedy and we wanted to see these vapid agent characters experience something that was grand. And the illiteracy, that episode we wanted to do this Sherrybaby, John Cassavetes raw archetype of a working class mother, and we knew going into it, there’s becoming less and less room in the arts because of critic culture, for exploring archetypes in a more irreverent or symbolic way, where you’re not just constantly justifying. So we knew there was a risk, but i think we were protected by the fact that we did it with love.

So, we live in a very fucked-up time politically. The show itself isn’t at all political, but both of you in your own lives are very politically active, and Tim and Eric have an inherent subversive quality to everything that they do. If I were to compare these times to any other time in history, other than the obvious fascist 1930s Germany, it would be 1980s America under Reagan and the Moral Majority and all the conservative backlash of that time. But it was also a time of Pee-Wee Herman, Prince and punk rock and a lot of artists who made all the right people uncomfortable. I would say that your work seems to be continuing that legacy.

JE: I think we’re both finding that on one level every artist needs to attempt practical activism, like actually show up, outside their art. So Pee-Wee and Prince are incredible examples of people who have been so embraced by all of culture even though they’re doing something so subversive. It’s really astonishing how they were able to seduce people over into a sort of more queer sensibility and challenge black masculinity and masculinity in general. Those are our idols.

KB: Hopefully we’ll be in a position where we can continue to make things that can lift up and amplify voices that are historically unheard or silenced, to help them emerge more in our culture more and more. Everyone that’s making stuff right now needs to be hypercritical about who they’re making physical and what they’re expressing.

I go through my head and I can’t think other comedy duos to compare you to. Usually there’s at least some element of straight man and card, but you really don’t have that in your dynamic. Do you think that’s unique to you two or is that more in the evolving nature of comedy?

KB: John and I, although we work separately and have different stage personas in a lot of ways, we have such a shared language that when we met it was pretty wild, because we had so much overlap in what we thought was funny and what we’re doing on stage. There is no straight man because neither of us could possibly do that without killing ourselves. It’s hard to describe because we both just very automatically started collaborating and getting on stage together felt very natural and normal and fun. 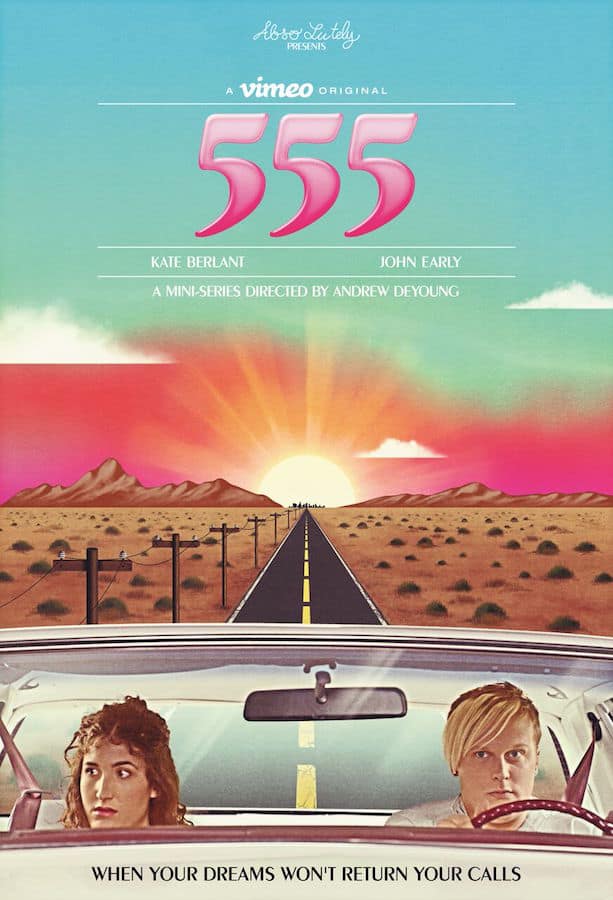 KB: And we both want the spotlight.

JE: Oh, totally. So there is something about what we do on stage or in videos … that’s what we like about it is that it’s two people coming at each other so hard with love and enthusiasm that creates this impenetrable bubble around each other and create a fantasy for themselves where they can both be in the spotlight. So the comedy is about someone from the outside poking the bubble we create around ourselves. It’s always us against the world and there’s a lot of that in 555.

All five episodes of 555 are now available for purchase on Vimeo for $3.99.