The gruesome twosome (yes that’s a nod to Sandy Cohen, referring to Julie Cooper and Caleb Nichol, basically the  Ivanka and Jared of The O.C.) had a date night watching The Royal Tenenbaums at last night’s SummerScreen in McCarren Park, the Daily Mail reports.

Odd for the two of them to venture outside of Manhattan, not on private jet; perhaps the alleged slumlord and his wife first swung by to check in on Kushner’s building at 184 Kent, which he plans to convert into condos, if it would just stop catching fire all the time (four instances to count since May).

Perhaps they were trying to appeal to the Brooklyn youngs, to make light of recent controversies, like when a staff writer at the openly pro-Trump Observer, which Kushner owns, penned an open letter challenging his support of his father-in-law after the “Crooked Hillary” meme’s blatant Anti-Semitic imagery surfaced.

. @Brokelyn @summerscreenbk known creep (me) was also in attendance pic.twitter.com/oY6nHZXEYu 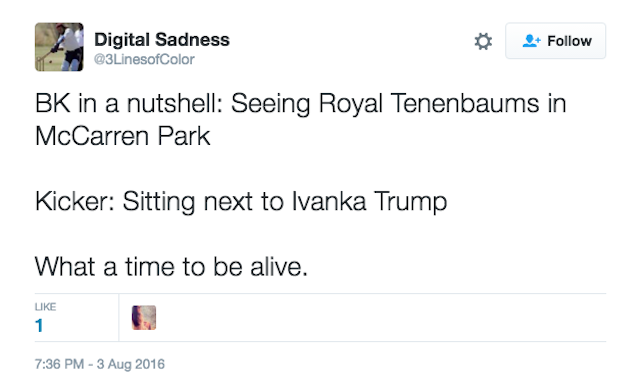 Or maybe, after a long day, they just yearned to indulge in a fantasy that the Trumps, too, could be like the Tenenbaums (not so different, really, as both clans’ patriarchs are morally unscrupulous, racist, sexist jackasses whose fortunes were made fraudulently, but we’ll take Gene Hackman’s Royal over the Donald any day). 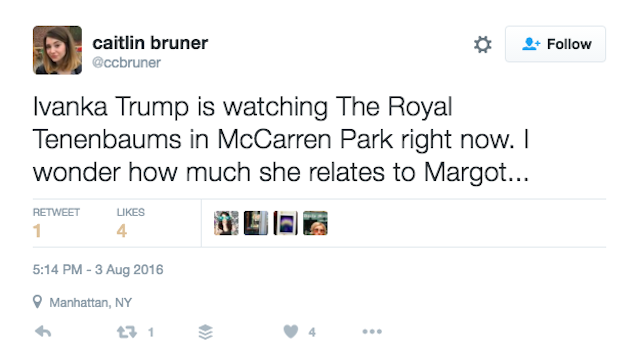 We all wish we could be Tenenbaums—no matter our race, sex, creed. Maybe that shared sentiment is what will make America great again.