Ugh. You post an item with the headline “Does this impossibly perfect Brooklyn couple actually exist?” and the next thing you know, the bride-to-be emails you. And not only is she statuesque, lithe and obscenely camera-friendly, she’s… nice (a lot more so than some of our commenters, tsk tsk!). Alerted to our story by her friends, Alex—see, I’d have guessed she was Alexis—writes the following:

Thanks for posting on us! A friend linked to it on my Facebook page, and I was seriously delighted. And since you asked, we’re getting married at the Brooklyn Academy of Music, in an 8pm-midnight party. A playwright friend is officiating for us. We’re self-funding the affair, so it’ll be passed hors d’oeurves and a red velvet cake and open bar, but no dinner. Lots of dancing, though. And our place (where the photographs were taken) is in Bed-Stuy, where we’ve been for two years.

Pressed for further details, she reveals that they don’t have a dog, as suspected, but rather two cats (slight let down there). The honeymoon is not a Catskills fixer-upper but in Bali, and they registered for the trip via Honeyfund (which sounds like a non-profit foundation that provides prostitutes to low-income men.) And we’d have thought they registered at the Brooklyn Flea! What’s more:

Alexis is a director and DP, and he shoots a lot of TV, feature and documentary projects. He has a production company called Harmonium Films & Music. I freelance as a video editor and production coordinator.

I would say by far the coolest thing about our wedding is the invitations. Alexis’s sister Megan is co-owner of a letterpress operation in Brooklyn called Brown Parcel Press. She designed and printed the invites (a pic is attached). Our save-the-dates involved punch out, letterpressed 3D glasses. She’s really the coolest. [Wow, take a look; she actually kind of is.] Again, thanks for your interest in us! It really is immensely flattering.

Too bad it’s not flattering enough to wangle more than a picture of the invitation. But maybe that’s okay. Who could stand the pressure of buying these people a gift? 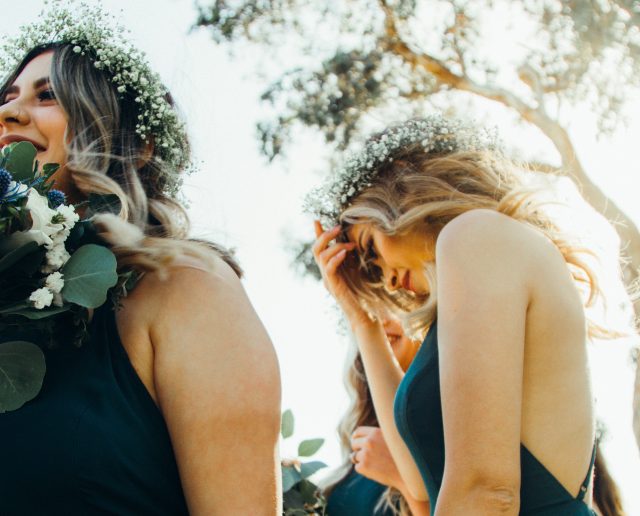 Wedding sites estimate that bridesmaids shell out at least $1,000, but it’s possible for the dutiful bridesmaid to do it all for less. Here are some ways to save. Wanted: elegant wedding catering for under $75 a head Brokester’s guide to wedding gifts under $25

Summer-time means sunshine, heat, cleavage and, if you’re anywhere in a certain age-range, weddings upon weddings. And once that gleaming, perfectly crafted, […]