We all occasionally feel ripped off by Brooklyn’s notorious profligation of artisanal foods. You can pay $15 for a jar of pickles or $27 for a crust of bread smeared with the liver of a chicken that studied abroad in Portugal and leave feeling a little dumbstruck, no matter how many times the word “organic” appears on the label. Does that make the occasionally overpriced food purveyors actual criminals?

That’s the jokey conceit used to kickoff the new DC title, Harley Quinn and Her Gang of Harleys, where Harley, the famously psychologically disturbed anti-hero, gathers up a Harley squad for some vigilante justice around Brooklyn. They start by beating up some food vendors at an obvious stand-in for Smorgasburg on the Williamsburg waterfront, and make lots of hipster jokes you’re probably sick of by now, but Harley is a Brooklyn native, so we’ll give her a pass.

The issue, which came out on April 13, is the first of a new title for Harley, who is no doubt getting a lot of print love building up to the oh-man-how-bad-are-they-gonna-fuck-this-one-up Suicide Squad movie, out Aug. 5.

You might be surprised to learn that there is a real New York City in the world of DC comics, but yes the city exists independently of obvious NYC stand-ins Metropolis and Gotham. In the current continuity, Harley broke up with crazy ex boyfriend the Joker and moved to Coney Island after finding out she inherited the Freak Show building. She also fittingly joins a simulacrum of the Gotham Girls roller derby team, which inspired part of her latest outfit.

In this issue, the Smorgasburg scene is used mostly as a cold open to set up the larger story, and it’s unclear whether the “Hipster Mafia” is a real thing or if they’re just beating up the regular vendors:

Writers Jimmy Palmiotti and Frank Tieri also have fun with the idea of Brooklyn authenticity, aka who gets to be a real New Yorker. Harley Quinn was born in Bensonhurst, according to the official comic canon, so she definitely gets the right to hate on the newcomers: 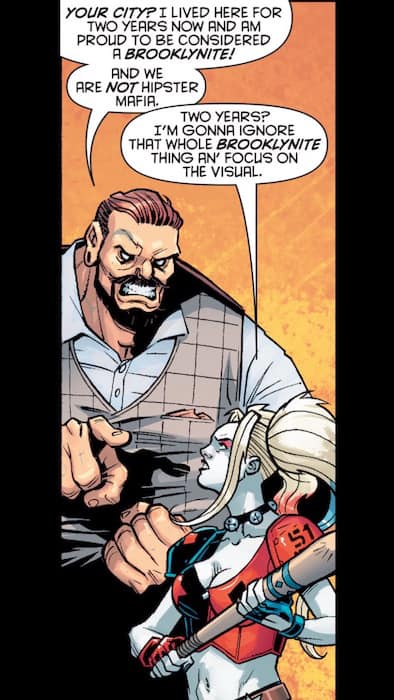 They also throw in a joke about monocles, which has become the codeword for fake NY Times Brooklyn style trend: 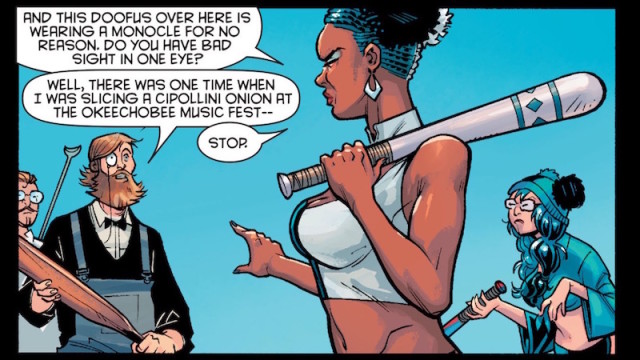 Harley makes a stand, saying she’s “not gonna let ya shake down an’ gentrify the gentrifiers,” and wins the fight by pulling out a carton of dairy milk from a bodega in Canarsie and pouring it into the head honcho’s mouth, while the rest of his crew looks on in horror. The jokes in this comic about Smorgasburg and monocles may be on the nose, but they definitely got this part wrong: Being vegan hasn’t been trendy in New York City in ages; declaring hunger war on animals like they were the Court of Owls trying to take over Gotham is definitely what Brooklynites love these days. 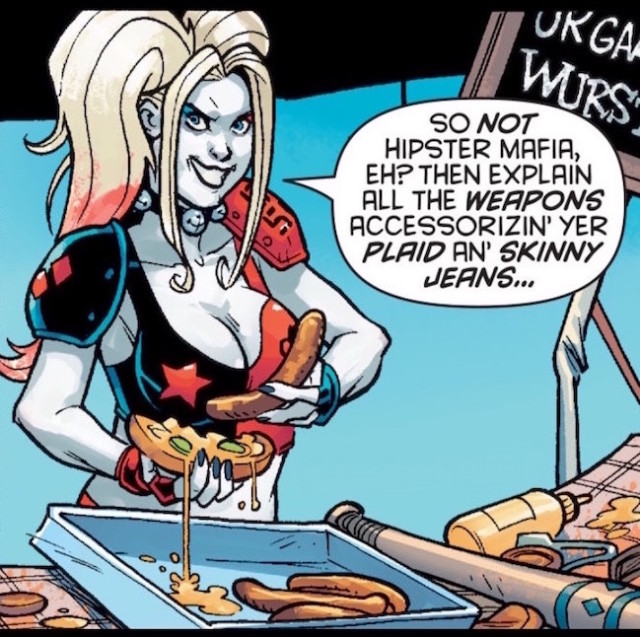 Harley Quinn is one of the most fascinating — and popular — figures in comics right now, and one that fans often herald for being a complex and strong female figure who defies easy categorization. Here’s a good explainer on her appeal, puddin’. She’ll be played by Australian actress Margo Robbie in Suicide Squad, though odds are that, much like Batman V Superman, you should stick to the animated series to see her at her finest.

(Note: The panels above are placed in this story out of order, get the issue on the DC app or pop in to your local comic shop).