One of the great things about living in the food delivery paradise that is New York City is you never have to pay for tupperware. Soggy paper boxes, crinkly aluminum dishes and the horrendous immortal waste of styrofoam are becoming less common, replaced by a constant flow of perfectly reusable plastic tubs. The downside to that is it creates lots of garbage because you can only save so many miso soup containers in your cabinet. And remember that recycling doesn’t absolve your sins: It’s where something comes from, not where it ends up, that creates the most waste.

The solution to all of this would be to order in less, cook more and use less waste, but lol this is America in 2016 and there’s nothing we love more than exercising our rights to CREATE WASTE. But now, as the Brooklyn Paper reports, two Greenpoint restaurants are trying to solve this problem by starting to use truly reusable containers — and offering you a discount for bringing them back.

“The restaurant business is such a wasteful industry as it is,” Todd Andrews, the chef and general manager at Anella, told the Brooklyn Paper. “I think it’s an opportunity to show people it’s possible to at least attempt to cut down on restaurant waste.”

The other restaurant is comfort food spot Jimmy’s (92 Calyer St.). Using the Shareware is slightly complicated than just hitting “order” on Seamless though. 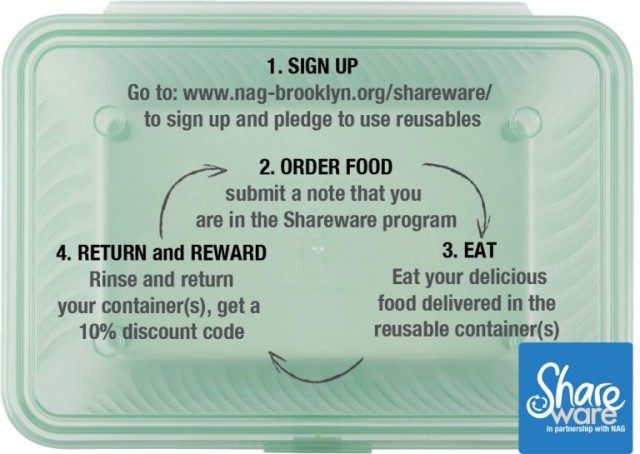 First, you have to sign up through the Shareware website to let the restaurant know you’re participating. You get your meal in the containers; then rinse them out and return them (no need to fully scrub them down). Then you get 10 percent off your order next time.

It’s a pilot program slated to last five months; after that, it’s unclear what happens. If you live near these spots, give the program a try, because it can only save you money.

If it doesn’t catch on, use it as a reminder that you could do a lot to cut down on your own contributions to waste in this city. Did you know that your hands and/or backpack can carry things just as well, and often better than, a crappy plastic bag from a bodega? You maybe never thought of saying “I don’t need a bag” when the bodega worker tries to force it on you out of habit, but try it sometime, you’ll be impressed to discover your hands had the super powered ability to carry things all on their own. And that will be one fewer bit of plastic whose entire lifespan of usefulness was in the five-minute walk from the bodega to your apartment.