All the women who independent, throw your hands up at me, unless you’re holding a baby, in which case, please be careful! The final episode of Girls was all about letting go — of relationships, of obligation, of whatever you thought maturity looked like.

While many would argue that last week’s penultimate episode felt much more like a fitting, traditional finale, this week’s three-character play set out to give closure to a few of Girls’ running themes, instead of adding any additional flourishes to individual characters’ storylines. As you may have already read, we’d seen the last of Elijah, Ray, Adam, Jessa and Shosh, leaving us with Marnie, Loreen, Hannah, plus one.

We begin with a callback to the beginning of the series: Marnie and Hannah spooning in bed. She’s surprised Hannah by driving up to her house and breaking into her window, which sounds very Marnie, overall. She’s there to plead her case: She wants to raise this baby with Hannah. Of course, this is Marnie, so she has the least dignified way of demanding Hannah indulges her in this seemingly noble task. Marnie’s got nothing better going on, and the fact she’s the only friend still standing makes her the de facto winner of the Hannah friendship Olympics. (“Who’s here? Elijah’s not here. Jessa sure as hell isn’t here. Adam isn’t here. Shoshanna literally despises all of us. Who’s here? I’m here. I win. I’m your best friend. I’m the best at being your friend. I love you the most.”) It’s aggressively pathetic and an utterly perfect thing for Marnie to say.

Flash forward five months, and Hannah has given birth to a baby boy named Grover (the name suggestion from babydaddy Paul Louis). He’s not breastfeeding like he used to. Hannah of course takes this as a personal offense, signaling the baby’s disapproval of her motherhood, womanhood, persondom, you name it. To compound Hannah’s mounting stress, she’s got Auntie Marnie meddling about, creating some kind of eerie millennial spin on Grey Gardens or What Ever Happened to Baby Jane? in Hannah’s country home.

Marnie is doing her best to be helpful, but it’s only frustrating Hannah more. On the other hand, when Marnie does try to escape for night to see some — ugh — local live jazz trio, Hannah can’t bare the thought of being alone.

In a panic, Marnie calls Loreen to fly in for the rescue. Hannah is furious that Marnie would undermine her like that, and she lashes out at Marnie for being disappointed their life together isn’t more Pinterest-perfect. Maybe there’s some truth to that, but at this point, it does seem like Marnie truly had her best intentions at heart. Inside, Hannah responds to her mother’s dose of reality by laying into her about how maybe Hannah would be a better mother if Loreen hadn’t married a gay guy and completely bungled her sense of what a functional family looks like.

With that, Hannah storms out of the house. She wanders aimlessly through the community. Day turns to night, and Hannah encounters a young girl fleeing her home without shoes or pants. Hannah stops her, obviously concerned the young girl is escaping some kind of violence or abuse. In a desperate attempt to seize this moment to be somebody else’s savior, Hannah offers up her pants and shoes. Turns out, the girl was just mad her mom made her do her homework.

That’s when Hannah shifts from sympathetic fellow young-person to parent, lecturing the girl about how her mother is just doing her job and loves her no matter how much pain that causes.

The exchange sends Hannah trudging back home, still sans shoes or pants. A cop car creeps slowly up beside her and escorts her.

Back home, Loreen walks in on Marnie, um, how do I say this delicately? “Flicking her bean” on Facetime with some dude in Weehawken. Marnie tries to pretend like that’s not what happened, but Loreen sees right through her. And not just about jacking off. She can see what Marnie is doing there with Hannah, sacrificing her own happiness because she thinks that’s what’s necessary to help Hannah. Loreen knows from experience you can’t make each other happy, unless you’re happy yourselves. (A bit of a spin on RuPaul’s “If you can’t love yourself, how in the hell are you gonna love somebody else? Can I get an amen up in here?”)

They’re on the porch drinking wine and smoking discussing what Marnie could maybe do with her life (law school?) when Hannah returns and plops down beside them. They don’t address the earlier fights, but when Grover is heard crying upstairs, all three move to tend to him. Hannah assures them that she’s got it.

Upstairs with Grover, Hannah sits down calmly, takes out her breast and Grover finally latches. Satisfaction washes over Hannah’s face as we fade to credits, listening to Grover feeding while Hannah sings softly.

OK, everyone, one last time, let’s all make sure our oxygen mask is secured around our dicks before assisting others putting Oxygen masks on their dicks, and discuss the moments from last night we loved so much we can’t even and the parts that were so ridiculous we can’t even.

We know Hannah was supposed to be in the wrong for yelling at Marnie for singing in the car, but oh man did we appreciate it. As soon as Marnie cranked that volume up, I was shouting at the TV to please no don’t make me listen to Marnie sing again.

The fight between Hannah and her mom was fantastic for a few reasons. First of all, it was fitting for the finale to feature an extended nude scene for Lena Dunham. (Take that, haters.) I also loved the way it was filmed from room-to-room. That fight spanned the entire house, which definitely feels like most of the fights I’ve had with my own mother. And lastly, is there a more perfect reply to Hannah Horvath than “You know who else is in emotional pain? FUCKING EVERYONE!” 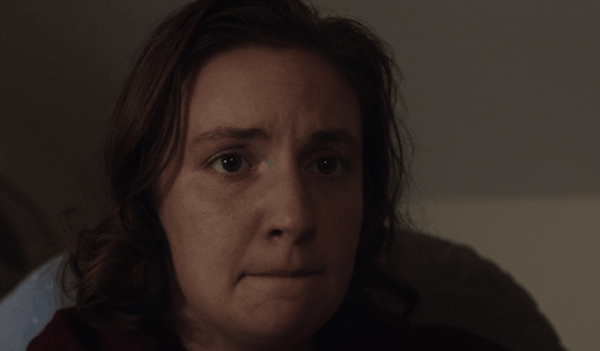 There will be a lot of hemming and hawing about the end of the series. I’ve seen some folks suggest this final episode’s preoccupation with motherhood undermine the show’s central feminist tenets, as if motherhood is inherently anti-feminist. That’s a conversation for someone likely much smarter than I am. I did, however, really like the ending for what it says about Hannah’s journey, especially as someone with mental illness. Hannah approaches the baby, breast-feeding, living with Marnie, the young girl on the road, as if they are all major crises. But each one is conquerable. Grover has formula for one night while she’s gone, and it’s not the end of the world. The satisfaction Hannah feels at the end of the episode isn’t an indicator that, yep, she’s all growned up now! It’s signaling that Hannah will always be Hannah. There will be obstacles that she obsessives over until they loom large like actual atrocities, but there will be victories, too.

As someone who has never exchanged sexy pictures of woman (though I’ve left a trail of dick pics across the entire nation and parts of Europe), can someone please explain what Marnie is going for with this titty-contour prop work?

The entire Marnie sex fantasy of being a naughty flight attendant was so hilariously clumsy, but it was totally worth it just for the part where the guy says “This is your captain speaking.”

What did you think of the final episode?

‘Hipster Brooklyn’ to be home of ‘The Munsters’ in upcoming reboot

What’s spookier than a family of monsters? Brooklyn rents.