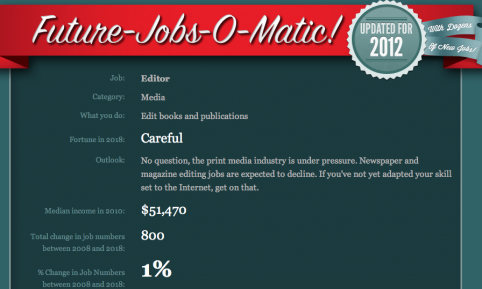 Have you checked out the Future-Jobs-O-Matic over at Marketplace yet? No, it doesn’t generate future jobs like we thought (bummer, Obama). It’s a neat little program that gives you cautiously optimist information about your career prospects in six years, which was just updated this week. Midtown-type jobs (surgeons, market analysts, meeting and events planners) have the best-looking prospects, while the future of Brooklyn-type jobs (bartenders, artisanal mayonaise ranchers, and Gowanus fishers) doesn’t look so rosey.

Writers/authors apparently make a median of $50,000 a year, which we’re definitely going to bring up at the next Brokelyn editorial meeting, but there will be 6 percent more jobs in 2018. The fortune? “The internet could be your best chance.” Thanks, obvious-o-matic. Reporters, however, lose about 6 percent jobs by then.

Bookkeepers in finance get the “good future” forecast: “You won’t have to worry about shortage of jobs due to those retiring and those changing careers. Job growth is steady and economic growth will only help foster more demand.”

Rooftop farmers may want to reconsider their career choice: The agricultural sector is expected to lose 20,000 jobs in the next six years.

Bartenders? You’ll have lots of jobs in the future, probably because the rest of us will be job-less: “Drink up. Prospects are good,” the fortune says.

Until then, I plan to be washing windshields on flying cars for some spare yuan from our debt-owning foreign overlords.