This weekend, Videology announced they can’t continue the Game of Thrones screenings they’ve been hosting for two years after receiving a cease and desist letter from HBO. Something about piracy, Northern Walls, and corporate lawyers. Videology’s not the only place around here that’s been illicitly showing Game of Thrones though, and we reached out to some of those other bars to hear what their plan was. The consensus: Winter is here and Game of Thrones viewings have gone underground. Welcome to the era of the Game of Thrones speakeasy.

All the bars we spoke to said they would keep showing it, though most were a bit concerned about publicizing screenings now that Videology has been taken. A number of the bars we spoke with actually hadn’t heard about the arrival of HBO’s secret police but already seemed to be aware they were breaking some rules. In fact, one bartender in  the Northeastern United States told us, “We know it’s a legality issue,” even before we told them about the siege of Videology.

“We’re still going strong, although I’m not sure just how far and wide I want to publicize that….” one Prospect Heights bar wrote to us, with an extra long ellipses for extra secret screenings. Another bar–which might be in Bushwick, might be in Cleveland, we’re not saying–even called us back immediately after telling us they’d continue showing it just to confirm that we weren’t HBO spies. (We’re flattered, but we’re actually Times Real Estate section spies).

Still, the screenings are going to keep happening. Some bars seem especially defiant in the face of the HBO machine. When we asked one bar..uh..somewhere south of Atlantic Avenue what their plan was, the owner stopped us mid-sentence. “We will always show Game of Thrones,” the future Al Capone of HBO viewings told us.

The screenings will probably look just like those of yesterweek, but with bars running scared and hoping to avoid baiting HBO’s lawyers into piling up a bodycount of copyright violators that rivals that of the Red Wedding , we can’t help but wonder if bars screening the show will take more extreme measures to protect themselves. Could the future of Game of Thrones screenings in Brooklyn look like film noir Stonecutters meeting, Mid-Atlantic accents, passwords, trench coats and all? We would normally link to our original list of spots hosting screenings, but in the interest of piracy and our FOMO from missing out on both the rest of the season and a chance at reliving the best part of the 1920s, we can only show you a redacted version of our Game of Thrones speakeasy guide. 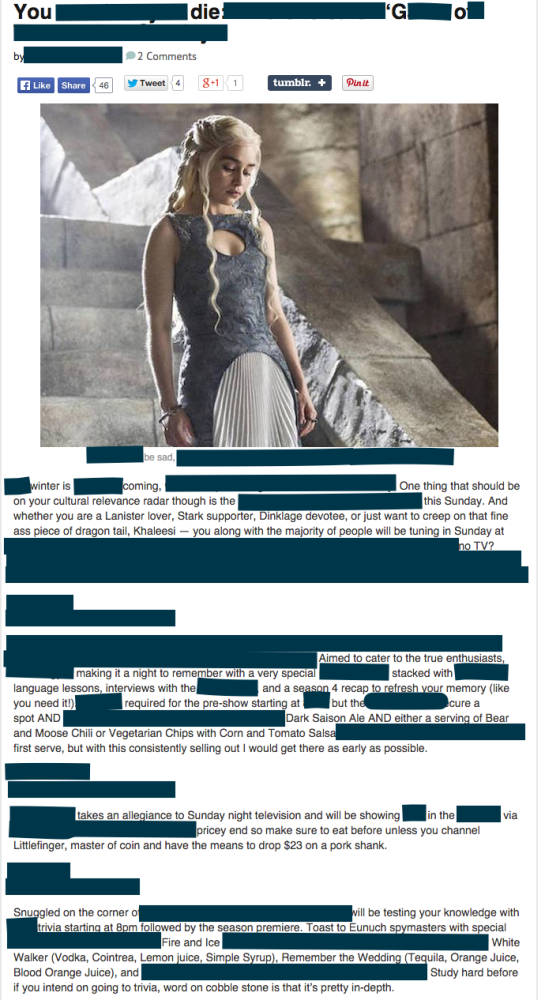 If you want in, just do what they did in the old days and ask a friend.