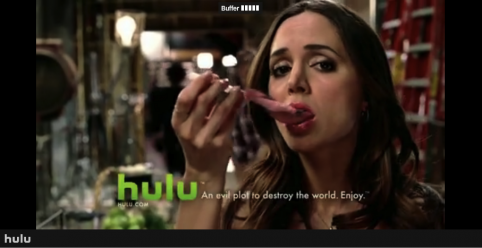 The cable heavies behind Hulu have let the cat out of the bag that they’re considering restricting service to people who already have cable, obviously eager to get on the brand-destroying gravy train. In the future, instead of having Hulu as an alternative to cable, you would get it as an add-on to your cable package, which means you’d have to shell out $65 a month to catch that one episode of Park & Rec every week. This is is like allowing only people who drive  Dodge Durangos to buy electric cars. Why would you pay anything at all for Hulu if you already get cable?

The move could be years off, but the Post reports it’s part of an effort to stop people from fleeing cable. What’s behind this? Doubtless it’s panicky cable executives who can see what we can: cable is expensive wasteland full of forgettable content. So instead of using their billions in resources to transition to a different content-delivery system, they’re destroying their best hope for the future, Hulu.

What’s especially galling about this is that so much of Hulu’s content can already be found on TV you can get with a digital antenna. You know, free television. If this goes through, you won’t be able to re-watch an episode of a show you already saw earlier in the week or catch up with a couple of episodes you missed, courtesy of Hulu.

What do these people expect will happen if and when they make this change? We’re all going to give in and plop down $65 a month (at minimum) so that we can watch Community and endless varieties of Starz? And Christ, we should all be so lucky that cable doesn’t cost a $165 a month a few years from now. Cable companies, being one of America’s last legal monopolies are constantly taking their awful business practices out on the consumer, whether it’s passing costs onto you or getting into ridiculous dick-swinging competitions over broadcast rights.

It’s completely insane to suggest that anybody take lessons from the music industry, but here we are. Partnering with streaming services like Spotify and Rdio allows record companies a new way to service their customers while getting a cut of the ad revenues and membership fees. Spotify currently has 3 million paid members out of 10 million altogether, and as of March, had already paid $250 million to music rightsholders. They’re also making piracy unnecessary.

In contrast, with this move, the TV networks and cable companies that own Hulu make content piracy much easier to rationalize, especially if the only options in front of a tech-savvy consumer are “overpay for entertainment to send an oligarch’s great-grandkids to Harvard” or “don’t do that.”

And it’s not like I’m some wild eyed lefty* screaming about this in a vacuum. The respectable, polo shirt-wearing types at Forbes feel the same exact way about HBO’s stupid decision to cut HBO Go off from the broader internet population.

But maybe this was bound to happen anyway. With the news Community, Parks & Rec and 30 Rock are being canceled to make way for shows by such comedic luminaries as Matthew Perry and Anne Heche, it becomes obvious that NBC wasn’t paying attention to Hulu ratings. Maybe they should have just taken all the money they sunk into it and used it to lobby Congress to shoot content pirates into space.

Hulu was shaping up as the beginning of an attempt at finding a middle ground and maybe even freeing us to live our lives without planning them around a damn TV schedule. Soon though, it could just be another footnote in the story of how cable destroyed itself.

*OK, so that part is true