Just as the groundhog portends winter, the opening of the Gowanus Yacht Club portends a sweet, sultry summer filled with suds and cheap burgers. Alas, this year the Gowanus Yacht Club is missing something other than watercraft: Duff Beer. Duff — you’d recognize if you were born in the Reagan administration — is the infamous cheap mass-produced beer of The Simpsons. For the GYC regular, Duff was the mystery watery beer that was just $4, a couple bucks cheaper than all the other draft beers. But the Duffman has turned off the tap, via a cease-and-desist letter from Fox.

According to two bartenders at the GYC, Fox Studios sent a formal order to stop using the name “Duff” in reference to beer or face legal consequences. Several e-mails to Fox Studio’s PR asking to confirm the story were politely ignored. However, Fox has gone after other incarnations of the Duff name in the past, so it’s highly plausible. This, however, seems to be the first time they’ve gone after a bar with no roof and barely room for 40 patrons. As if it were likely someone would confuse the GYC with a two-dimensional cartoon that has lived long past its prime. 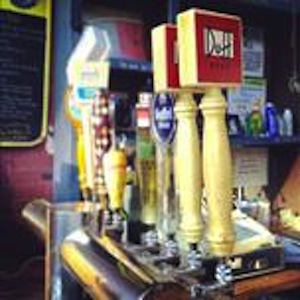 Fearing the might of the massive Uncle Rupert conglomerate, the bartenders told us that GYC has complied with the C&D. So now “Duff” and its cousin “Duff Wheat” have to go by their real names (Coors Light or Bud Light — yep, that’s all it was) and real price (for some insane reason $6 like the other much better beers on tap). For us, we’re going to call it by its Scandinavian moniker: Düff.