Long before authorities started wiretapping Carroll Gardens’ beloved Smith Union Market in 2015 for suspected gambling and loansharking, as a featured story in the New York Times recapped yesterday, locals were well aware the spot had not just old-school Italian character but a great diversity of 40s (they carried glass St. Ides months after other spots started only selling the plastic bottles), a high-quality curbside domino scene and a host of random cleaning products and aging Beanie Babies.

In a fitting homage to the bodega, fifth-generation Carroll Gardens native Abraham El Makawy and fellow members of his budding art collective AINT WET (yes, they’re the ones behind those subway posters that make you do a double take at because they look like the MTA’s official WET PAINT signs) designed and printed T-shirts repping the market, endearingly known as Smunion. The tees, featuring the 72-year-old corner store’s logo on the front and a picture of the cross streets on the back, are selling for $19.45 on AINT WET’s website as of January 10.

“My relationship with Smunion isn’t the typical one,” El Makawy told us on the phone of his experience growing up near the shop and eventually becoming friends with its owner, Vincent Taliercio, or Vinny:

My connection with Smunion came as I got older and watched the neighborhood disappear and Smunion still exist as this legendary platform for youth. A lot of us feel like we were cheated of our New York childhood experience. I went to school out in Jersey and was stuck out there for four years. I lost the most crucial years to be a real New Yorker, and that made me love New York more in some way.

Smith and Union is the perfect spot. I go in there, get a Manhattan Special or something. We were originally printing tees for Vinny’s friend, but my real dream was to print for Vinny. We wanted to celebrate his place in the neighborhood.

The T-shirt project was on the back burner until the scandal happened, culminating in Vinny being taken away in handcuffs last month as part of a sweep ordered by Attorney General Eric Schneiderman of bookies doing business in relation to the Genovese Organized Crime Family. He’s back now.

“It was designed six to eight months prior to everything getting crazy,” El Makawy told us, “I went in and was like, no one has a uniform in here. Everyone in the shop was super excited about getting outfits.”

Both Vinny and El Makawy anticipated the XL and L sizes to be the most-demanded of the shirts, as they assumed it would be the long timer neighborhood fogies who’d have the most interest in the shirts. Not so.

“Within a few weeks we got a bunch of orders for smalls and mediums and realized young kids, not old Italian dudes, wanted em,” he said. “I’m getting DMs from kids that don’t have credit cards.”

While El Makawy gave Vinny a shirt the same day they were printed, he hasn’t ever seen Vinny actually wear it. “I came into the shop, it was like 5 o’clock in the afternoon and Vin was just opening up, and I was like Vin, they’re done, try em on. Vin was already wearing a grey T-shirt and he was like, I’m not gonna take off my grey T-shirt to put on your grey T-shirt.

For now, the Smunion shirts are only available through AINT WET’s online shop, but starting this summer, El Makawy is proud to say they’ll be available at Vinny’s. 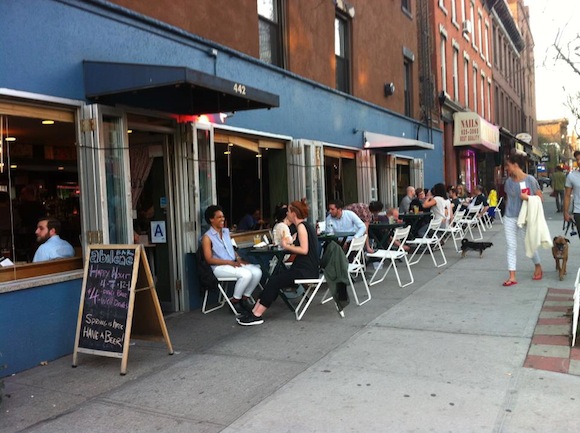 Bars We Love: Be true at Abilene