Since Bed-Stuy’s eclectic, pun-inspired eatery Do or Dine unexpectedly shuttered last September, neighborhood folks have long awaited news of the next establishment to inhabit the space at 1108 Bedford Avenue, right next door to Dynaco. Well, no need to wait any longer: On Thursday, Do or Dive, a new bar from the owners of Lucky Dog, Skinny Dennis and Rocka Rolla, opens its doors to the public with a free open bar from 8-10pm.

We couldn’t help but notice, the name is literally one letter different. “With Do or Dine, they wanted to do a fine dining restaurant, and we wanted it to be a dive bar, so it worked out for us to become Do or Dive. We don’t have to make a new sign! We’re broke and out of money!” co-owner Sal Fristensky joked.

The owners include Fristensky, William Mackin, Brenden Jones, Steven Pandolfi and Roni Dotan. Curious what to expect from the new project from the folks behind bars like Skinny Dennis, a honky tonk named after country musician Skinny Dennis Sanchez, and the hard rock/hair metal-infused Rocka Rolla (after a Judas Priest album)?

“This is just totally a dive bar,” Fristensky told us. “It’s a cross-breed of all of our bars. Maybe closest to Lucky Dog.”

It will be dog-friendly, he said, his black french bulldog, Ammo, roaming around at our feet. And most crucially, they will be serving “that coffee thing, ($7)” as a sign behind the bar reads, which means the one and only Uncle Willie’s Frozen Whisky Coffee—aka the love of my life—previously, only available at Skinny Dennis and Rocka Rolla. This will be a welcome danger, as I live down the street; if you don’t hear back from me after Thursday, it’ll probably be because I drowned in the slushy machine. 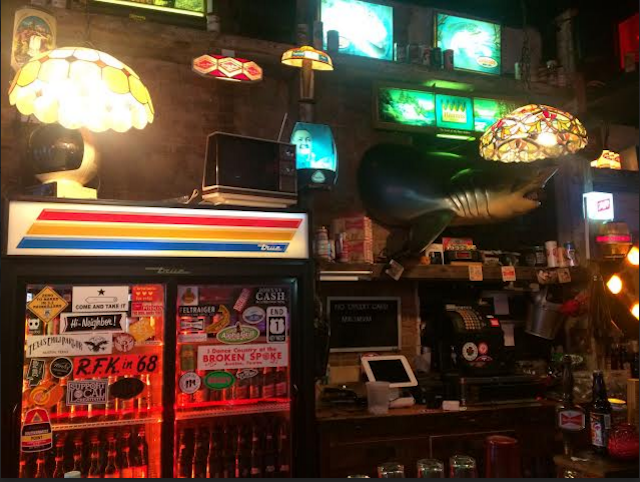 The bar certainly has the same retro-kitschy feel of their other bars, with red vinyl booths, vintage light-up beer signs, stained glass lamps. One welcome new quirk: They plan to air Jeopardy daily, a die-hard dive bar tradition, on a comically-small TV behind the bar.

In addition to Willies, they’ll do classic cocktails—Boulevardiers, Old-Fashioneds—but also tongue-in-cheek mixes, such as the “Bad Dad,” a double pour of well vodka mixed with Pedialyte (whoah), and an affordable list of domestics and craft beers. A menu of sandwiches and bar snacks is in the works. 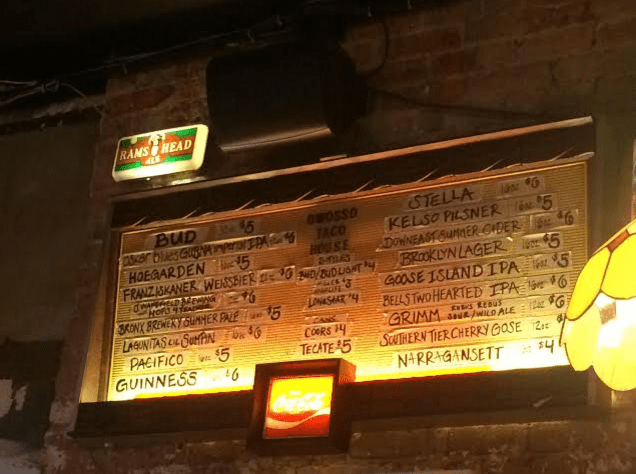 Back in February, the owners experienced some difficulty when they went before Community Board 3 for a liquor license. “Oh, we didn’t convince them at all. We got, what, maybe one vote?” Fristensky said. Although “they made it very clear that they didn’t want the type of places that we open to come to the neighborhood,” he said, “community boards are strictly advisory.” After being rejected there, they went before the official state Liquor Authority and got approved without a hiccup.

The response from the Community Board was definitely an anti-gentrification thing, Fristensky said. We asked, how do you gracefully navigate that, as a new bar opening in an historically black neighborhood like Bed-Stuy? Do or Dine certainly received flack when it first opened, a not-cheap, small plates restaurant whose name played off the Biggie lyric and included a drink list labeled “dranks.”

“We’re the most friendly place with the most reasonable prices, welcoming to everybody,” he said. “They were saying, we don’t want places that are going to cater to people who moved her three, five years, eight years ago. You’re telling me that somebody who’s lived in this community eight years isn’t considered a part of the neighborhood of Bedford- Stuyvesant? What, because they didn’t come from three generations of people? That’s everywhere in New York.”

Reasonably priced is right: $5 for a 32 ounce Budweiser during happy hour. We expect to enjoy many in the very near future.

Do or Dive opens Thursday night with a free open bar from 8-10pm. They’ll be open daily from noon-4am.