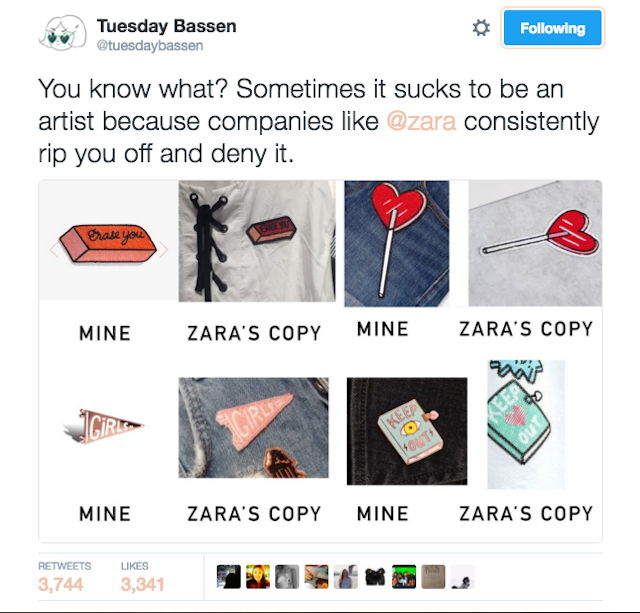 Last week, illustrator Tuesday Bassen took to Twitter to accuse fashion retailer Zara of ripping off her designs. She posted a side-by-side comparison, above, of her original illustrations and Zara’s near identical versions.

To anyone with eyes, Zara’s versions are undeniable copies. Bassen tweeted the graphic in response to a letter she received from Zara denying her claim, arguing that the designs in question weren’t distinctive enough to be associated with her, and that any complaints coming from her small customer and fan base were insignificant compared to Zara’s millions of clientele worldwide.

But Zara might be wrong about the impact one independent artist can have when she gets enough interested parties on her side. In the week since her tweet went up, Bassen’s situation has been covered by several media outlets and a third party has even set up a Go Fund Me in her name. And it’s drawn attention to other artists whose work Zara has co-opted. Shop Art Theft, a new Instagram account created by one such artist, Adam J. Kurtz, is a good first step towards helping artists fight back and helping consumers stay woke.

Shop Art Theft catalogs more than 40 designs Zara has stolen from over 20 independent artists, and it’s being constantly updated with further examples. (If you know of any, you can submit them to the Shop Art Theft Tumblr.) The Instagram links out to a site where you can help out the sleighted artists by purchasing their work from them, directly.

Doing that and boycotting Zara is a good first step, but unfortunately, small artists get plagiarized all the time. Zara isn’t the only culprit; retailers Urban Outfitters and Forever 21 have been guilty of the same kinds of appropriations. It’s a rampant practice that independent artists have to constantly look out for, and shoppers, too, if they don’t want to contribute to fast fashion’s indiscretions.

Though the social media response to the artists going public about the theft tends to be galvanizing, it doesn’t often lead to them getting vindicated financially. In the best case scenarios, lawsuits get settled and the product in question gets taken down from the site. As consumers, we should strive to be aware of companies that are repeat offenders, and aim to purchase directly from artists, designers and small businesses. Here are three recent examples of times retail giants—and one very popular app—have poached artists’ works:

Forev’s has been sued more than 50 times for allegedly copying both big brands–H&M being one of them—and independent designers. Last year, freelance artist Sam Larson posted an Instagram of one of his designs he later discovered on a Forever 21 crop-top. It received 14.6K likes, and inspired a social media campaign with the hashtag #paysamlarson. According to Buzzfeed, Larson’s spokesperson declined to comment on whether or not he had pursued legal action.

The trendy retailer has been accused of counterfeiting work from independent designers countless times; from Brooklyn-based jewelry designer Lillian Crowe, ceramics designer Stephanie Kao, jewelry designer Stevie Koerner, to give a few examples. In 2014, artist James Soares, who goes by Spires, alleged on his Tumblr that UO lifted one of his textile patterns and used it on a skirt. The post received more than 90,000 reblogs. In this case, Urban removed the product from their site.

This instance is a little different because financial gain isn’t at stake, but it follows as another example of a major corporation shamelessly ripping from smaller artists. Make-up artists have accused Snapchat of swiping their designs for selfie filters. A couple months ago, make-up artist Mykie posted a side-by-side on Instagram, which received 75.2K likes. Snapchat responded by removing the filter—an easy out when there’s no profit to lose.

With big companies routinely guilty of unscrupulous practices, the best action you can take as a consumer is to avoid major chains and instead purchase directly from small businesses and independent designers. Make Shop Art Theft your first stop.