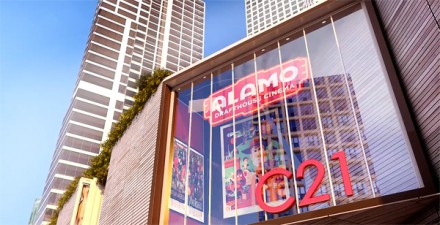 Williamsburg has been hogging Brooklyn’s share of serious movie houses going up lately with its additions of Nitehawk and indieScreen, but the grandaddy of boozin’ at the movies, Alamo Drafthouse, is set to make cinephiles outside Williamsburg happy, with their planned opening at the Fulton Mall. The Austin-based movie house isn’t set to open until 2015, which should be just in time for the next regrettable, alcohol-necessitating Star Wars movie to come out.

The Drafthouse is going to be part of the City Point development, last mentioned here because people were angry at Armani. The theatre will have seven screens and show current features, repertory programming and incorporate Alamo’s flair for themed days, like Terror Tuesdays and events like HeckleVision, in which your texted joke about a movie appears onscreen. Also? Booze, glorious, glorious booze. Alamo made their name both with smart movie selections and the idea to sell people drinks during the film, and they won’t be leaving that part of their business behind in Texas.

Just keep in mind that other than HeckleVision, Alamo takes a harsh view of texting during movies, so be sure to break the habit before you start going there. Because if you complain after they kick you out, you can end up an unwitting movie star (Rated R for harsh language):