It feels like every day somebody is campaigning for us to leave New York and move somewhere that’s actually affordable and proffers a higher quality of life. A couple weeks ago, we learned that we could get paid to move to Maine. A few months ago, we spoke with a mix of locals and transplants who made the case for relocating to New Orleans. Way back in 2012, we considered moving to Philly, a whopping four years ahead of a report out last month by the apartment-search site Abodo naming Philadelphia the “Best City for Millennials.”

With the DNC kicking off there next week, the city of brotherly love is fresh on our minds, and it turns out, there’s another “Brooklyn to Philly movement” that we didn’t know about. MovetoPhilly.com is the passion project of a Brooklyn expat, Christopher Plant, a realtor who would like to help you jump ship and join him in “Brooklyn 2.0”. He even encourages you to call him on the phone and ask him about it. So we did. 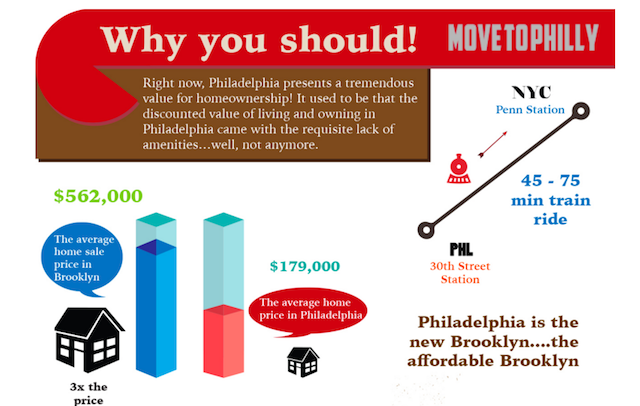 Plant, who moved to Philly in 2002, has some first-hand experience with the pitfalls of Brooklyn real estate; he helped open legendary DIY space Galapagos Art Space, (R.I.P.) — which is now reopening in Detroit — serving as the manager there from 1997-2002. He originally left Brooklyn because he wanted to “own real estate and control my own fate.” He spoke of checking out Bushwick spaces, “burnt-out shelters for $400 grand.” Looking back, he says, “I wish I had bought them all then.”

When we asked him why we should move to Philly, his answer, unsurprisingly, was “Affordability. A lower bottom line.” He gave the example of industrial warehouse spaces with “great windows” that in Brooklyn go for $25-$30/square foot, but in Philly are as low as $6-$10/square foot. Even if you’re just looking to rent residentially, the numbers speak for themselves: as of June 2016, an average two bedroom in Philadelphia rents for $1911, compared to $3,452 on average in Brooklyn.

He originally launched MovetoPhilly.com in 2013 as “BrooklyntoPhilly.” Now, Philadelphia is, as the website proclaims, “the new Brooklyn…the affordable Brooklyn. The Brooklyn that makes sense. The Brooklyn that allows you to live the way you want to live.”

Since then, he’s expanded the site to target folks from any city who are seeking a higher quality of life. “I’m not trying to take the Brooklyn mantle and put it on Philadelphia,” he assured us—and resident Philadelphians will thank him for that. In general, he says, the project is with the aim of steering a “larger conversation about how people are choosing to live, what they can afford, and how that influences their life.”

The prospect of leaving Brooklyn for Philly is still a real consideration for many folks, he tells us.

“I was just at a wedding in BK three months ago, and people were actively targeting me to ask about moving to Philly. Because, you know, living in Brooklyn is hard.”

We had to ask, what’s his favorite bar in Philly? Hop Sing Laundromat, which is not a laundromat-bar, but a speakeasy in Chinatown with a straight liquor happy hour ranging from $3.50 shots of Espelon Anejo tequila, to $39.99 Bowmore 25 year single malt. Maybe if we move to Philly, we’ll be able to afford the Top Shelf.