I don’t know about you, but every time someone brings up Brooklyn, specifically BoCoCa (Boerum Hill, Cobble Hill, Carrol Gardens) district, I can’t help but to think: man, this place is in dire need of an Artisanal, Fair Trade, Organic, #Blessed food shoppe.

For those of you unable to pick up on the dripping sarcasm , please click here.

I’d like to bring to light a little something going down in BoCoCa regarding neighborhood staple Jesse’s Deli. Formally known as Jesse & Co. Market Place, Jesse’s has called Boerum Hill, at the corner of Bond and Atlantic, home since 1983. “It’s the place where at 8am women in suits and dudes in their robes wait on line for a coffee,” explains neighbor Tommy Noonan. “You buy anything from a BEC to cigarettes to toilet paper there.” 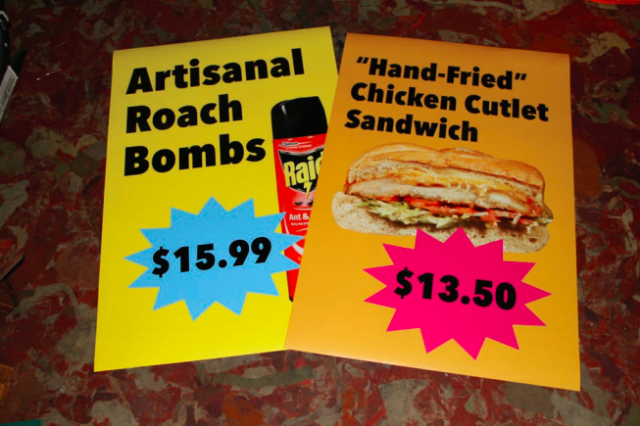 In response to a reported hike of 2.5 times the current rent, effective July 1, the deli has decided to inflate all goods by that same amount, in a publicity stunt. A chicken cutlet sandwich typically costing $6 is now referred to as “The Hand Fried Chicken Cutlet Sandwich” and costs a $13.50. Raid roach spray usually priced for $8 is now sarcastically referred to as an “Artisanal Roach Bomb” for $16. No, this is not a middle finger to the neighborhood or its patrons. Rather, it’s a humorous attempt at bringing to light an unfortunate occurrence happening throughout Brooklyn.

Today, June 12, marks the beginning of “Artisanal Jesse’s,” and sadly the beginning of the end for the actual Jesse’s Deli. A petition was started by Jesse’s employees and community members in an attempt to  bring awareness to not only the closing of Jesse’s, but the mass exodus of other local spots. “At this point, Jesse does not know if he will be able to afford moving his store to a new location, but it is for certain come the first of July, Jesse’s won’t be in BoCoCa anymore,” comments Patrick McCormick, a neighbor behind the petition.

It appears the people at Jesse’s are going out with a sense of humor. You can go into the deli and purchase “A Pasture Raised Flash Frozen Terraki Bowl” (more commonly referred to as Amy’s Organic Bowls) for a wooping $21.99. And I’ll have a bag of your finest Franzia, please! The ability to laugh and poke fun at the depressing inevitable is something I’m sure community members appreciate, but it still doesn’t make it any easier. Losing Jesse’s is a constant reminder of the swiftly changing neighborhood.

“We don’t want to see these local places go,” says neighbor Doug Cameron, who helped with the rebranding, along with Tommy Noonan. “This is not a singular event. Gentrification has happened, is happening and will continue to happen.”