You don’t have to look very far in any direction in this fair city to notice that when any group of people relocate an often vast distance to settle here, they tend to stick close to their own. They bring their customs, food, and language and bathe another neighbourhood in the familiarity of their homes far away. In Ireland, we have been known to enjoy a drink or two, in addition to that we often like another half dozen after the initial couplet have the whistle whet. Inevitably then, you are never short of a bar claiming Irish ancestry. The point to consider here must be: is this a stamp of pride or a desperate claim for legitimacy? Needless to say there are per capita, more caricatured Hiberno-Disneylands scattered around Midtown than there are Chase ATMs, but what about these Brooklyn neighborhoods we call our stomping grounds? Supposedly still far flung from the bells and whistles of Manhattan, there must surely be a better chance of stumbling into somewhere legit. I checked a few out, using my heightened sense of Irishness—thanks to power of passport—to separate the wheat from the tacky shamrock-laden chaff.

Shayz is intimate for such a large room. I’d heard otherwise but over the course of a well-poured Guinness (in an actual pint glass) I found myself in an environment populated by friendly staff and amiable locals. Furthermore, the claim that their Guinness was the “best in the neighborhood” proved correct. The bar talk blended seamlessly between relatively forgotten late 90s emo/post-hardcore and the perils of the BCS bowl system. Being run by two guys from Dublin, however, it is not a stretch to say that some “old vs. new” elements are at play here. With equal opportunities to gab about sports or music, the dominating vibe is “neighbourhood bar” as opposed to leaning toward “sports” or “hip”. After the $5 Guinness I switched to a $3 PBR and while both of these drinks were at Happy Hour prices, they only go up by a dollar after 9pm. Shayz is situated in one of the most picturesque enclaves of Greenpoint and is well worth an extra few clicks down the street if you’re barhopping. They also serve a mean Hot Toddy to combat the impending winter nights and have a large back patio open until about 1am nightly. This is the kind of bar that’s reminiscent of my favourite haunts back home, but moreso in the atmosphere than the setting. That is to say, although I highly recommend Shayz you’ll be welcomed by an overall friendliness as opposed to some kind of Céad Míle Fáilte. 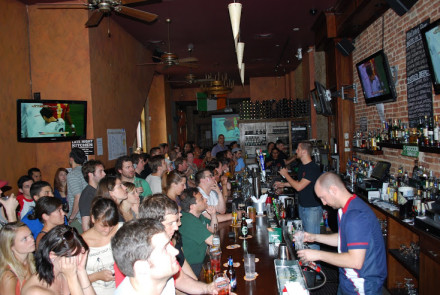 Like Shayz, I paid $5 for a Guinness in here but it only came in a 16oz glass, which is like trying to fire shotgun shells from a handgun. In here, it’s better to stretch yourself to $6 for a Blue Moon outside of happy hour. While the drinks are nothing you won’t find elsewhere, the food is top-notch. I highly recommend the Bam Burger: absolutely delicious and the side order was quite generous. As for the vibe, I really wasn’t feeling it as much as other places. It didn’t help that I was with a friend who had a Mohawk and seemed to attract some stink-eye from the hostesses. Come on Fort Greene is still in New York City, try not to be so shocked. In the shadow of BAM and a couple of minutes’ walk from the Barclay’s Center I get the feeling that Mullane’s lends itself moreso to pre and post-concert crowds and Nets fans.  The overall aesthetic leans closer to a gastro-pub/sports bar rather than anything distinctly Irish besides the proprietor’s name and the generous food portions. There are bars like this back home, but there are bars like this everywhere. That being said, I am very aware of the fact that a larger group bar-hopping around Fort Greene over the weekend or a bunch of friends gathered to watch a game would get the real benefit of Mullane’s. They are catered for by lots of big screens with a wide range of sports being shown. Not a spot for a chilled single drink after work, but definitely one to hit if you’re starving after a Nets game (the kitchen’s open until at least 1am) and you haven’t already spent your life savings on concessions there.

Now this is more like it. Nestled in the shadows of the Verrazano Bridge, Kitty Kiernan’s is a neighbourhood staple in Bay Ridge. Upon walking up to it and entering I felt like I was walking into a bar that could as easily be on the Dingle Peninsula as nestled in New York Bay. Price-wise this one is the most expensive on the list but hands down, has the most authentic Irish atmosphere. $5.75 is the cheapest beer and no reduced offers/happy hours. My advice is to be flush and drop $6.25 and get the best pint of Guinness I’ve had since coming to America. Failing that you can also treat yourself to an Angry Orchard, Smithwicks, Blue Moon or anything else on tap. This kind of place would be referred to as an “Old Man Pub” in Ireland; it’s the kind of place you wouldn’t be caught dead in at 18/19 (legally, I might add) but becomes a second home by your mid ‘20s. Warm and spacious, coupled with friendly staff and a very convivial atmosphere, do you really need any more excuses to check out Kitty’s and the beautiful Bay Ridge neighbourhood around it?

“An Irish Bar” is written on the awning but that’s as far as it goes. In spite of many materials being shipped from Ireland when the Monk moved from 5th to 3rd Ave, any type of an Irish atmosphere in here is lost on me. While they also served a good pint of Guinness it wasn’t a patch on Kitty’s which is only down the road. They have a big bar food menu which looked delicious, but I didn’t get a chance to try any. What trips the Monk up is that it’s cavernous inside. I understand from my research that the former space was a much more cramped, rough and ready space and perhaps in the move to a larger location a sense of identity has been lost. I was expecting much more atmosphere when I entered as a good-sized crowd was in there for a Wednesday night and the Knicks had just sank a buzzer beater. The best option is to file the Wicked Monk under same category as Mullane’s: good for bar-hopping with friends or to get a big group together to watch a game as there does not look to be a bad seat in the house. The busy staff are never impolite, even with massive bartop to attend to, but understandably won’t stand around to shoot the shit with you like in Shayz or Kitty’s. Like its neighbour down the road, the Monk is pricey, but it’s just the neighbourhood. Bay Ridge is characterised more by working professionals and families; they don’t drink all day and they don’t need to offers to help them along when they’re in there. Standards Bud and Miller are 5 but splash out for something more on the big range of taps.

While Kitty’s wins the overall authenticity vibe and Shayz does a fine job of blending the old and new elements of Greenpoint, Connie O’s doesn’t even have to try; it just is the old and new. Still standing after eight decades nestled on Norman Ave it has the best 50/50 mix of Irish and American. Irish-owned, with American neighbourhood dive bar aesthetics, you’re definitely stepping into the real deal here. An unnecessary aside but I couldn’t shake the Wire vibe off the place, I expected Jimmy McNulty to walk in any second. Only Coors and Bud on tap but $4 will get you a bottle of Zwyiec (and take it from me there aint nothin’  more Irish than getting trashed on good, cheap Polish beer with your friends). There were other bottles on offer but just like the bad immigrant that I am, I stuck to what I knew, but had a damn fine time doing so. Of all the places visited for this liver-whipping article Connie’s surpassed my expectations the most. I’d heard of cold shoulder receptions for the thick-rimmed glasses and skinny jeans crowd but met nothing of the sort. A total change of pace from a lot of the rest of Greenpoint, I highly recommend a visit. Strike up a conversation with a local who’s been drinking in here since Kennedy was president, buy them a large Jameson for just $4 and who knows, you may even get a couple of “quintessential” Connie’s stories from the good old days.