I LOVE to shop, but this habit of mine comes with some unfortunate side effects.

In the past, I’ve hit up an outlet spot like DSW, thinking I’m getting a deal on some pair of Aldo boots or something that still comes out to like, 100 freaking dollars, and then 6 months later the zipper breaks and the heel pops off. Or there’s the time I spent $60 on some dress at Topshop, since that’s apparently the going rate nowadays for something that cost $2 to make, only to have the seam inexplicably unravel and leave me half-naked in line at some Duane Reade NOT within walking distance from my house.

I don’t know about you guys, but these betrayals, which always occur after I justify a higher-than-normal purchase price, are what caused me to look into other cheaper outlets to do all my shopping. And let me tell you, Brooklyn’s very own Fulton Mall is the place to Get. Shit. Done. The amount of times I’ve spent more than $30 on a single item are zero, and I’m still rocking things bought from years past. Here’s a little guide to help you save in your wallet and amp up your wardrobe, minus the morning after guilt.

What to buy: Nail polish

Essie is known to be the muse of nail polish. I mean, how many times have you said/heard something like “I love this color, it’s Adore-A-Ball by Essie!” And while I wholeheartedly admit the colors are dope, it’s like, $7 a bottle. I also find that by day two of my at-home manicure, all nail polish chips like a bad paint job on a subway platform. So instead, I now shop from Feel Beauty’s nail polish selection, which includes more bright & bold options than a Lisa Frank notebook.

What to buy: Basics

Ahhh, Conway. A staple go-to for all of your cheap shopping needs! The best thing to do at Conway is visit once or twice a year, and while there stock up on packs of socks, tank tops, and leggings, all of which cost a nifty $2.88.

What to buy: Bathing suits

Bathing suits are really flippin expensive given the fact that they’re basically a few cloth triangles stitched together, and you know that’s the damn truth. It’s especially daunting to drop $70 on one when you live in a place like New York and you really only make it to the beach a few times a year anyway. At this point I don’t even bother with a place as “cheap” as H&M, where bikinis run $30 and leave me naked in the ocean the second a 5-foot wave comes rollin in the deep. Even if you do have the budget for a $60 suit, buy a cheap one from Dr. Jays instead. You can then donate what you saved to organizations like Occupy Sandy. Volunteering is always in style!

What to buy: Perfume

How much: About $20 cheaper than anywhere else

Smelling good is important, especially in this grimy city. I dunno about you, but I feel like I’m doing everyone a favor on a crowded-ass subway by spritzing up in advance. Fulton Island has legit discounted fragrances. If you’re not sure what to buy, hop on over to Macy’s across the street to test some scents out, then head back over to the Island to actually buy that shit on a budget. 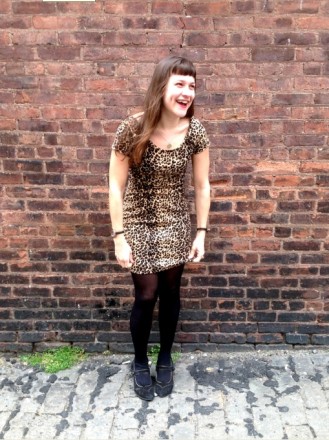 What to buy: Dresses that can be worn literally anywhere

Sometimes you have a Friday where you go to work, then meet your boyfriend’s parents for a steak dinner at their favorite restaurant for the past 15 years, and then top the evening off with a concert at some crusty BK venue. That’s a lot of events that you need a single outfit for, one that won’t make you feel awkward at some point in the day or that you’ll have to change out of. Fret not–this is what Rainbow is for! Check out this leopard dress I picked up the other week. It was only $16.97, transversable, and fly as hell.

What to buy: Fitted caps

A lot of ladies support a New York team and like to show said support by incorporating a fitted cap into their outfits. Problem is, legit fitteds are never a deal since they’re always a fresh thing to have on your hat rack and ALWAYS in demand by fly dudes who coordinate their caps with their wardrobe. At a known place like Lids, they’re usually around $35. Instead, go to Quick Strike and save the five bucks for makeup remover and a lipstick from the beauty supply store next door.

What to buy: Camo-print stuff

Not only is camo in once more, it’s never really out. As far as I’m concerned, you can never go wrong with this bad-ass classic print in your wardrobe. Brooklyn U.S.A. is a pretty dope spot overall (they have THE COOLEST comic and British-flag printed leggings), but their camo section is just outta control. Check out this ridiculously awesome cat-suit I found there. I’m gonna go back and buy this bad boy to rock around the urban jungle.

What to buy: Shoes

Like I said, I’m done with DSW, Aldo, and basically any chain place that claims to have a shoe sale. While the merchandising at Danice is a little overwhelming, it’s well worth it when you realize you just got a hot new pair of heels, flats, AND work shoes for less than fifty bucks. Danice blows those chains out of the Hudson and into the Gowanus Canal.

Where: 536 Fulton Street, right next to Danice

Need a leather jacket? No. You don’t. You need 3 fucking leather jackets, because obviously. Seriously, at Delancey Leather, YOU GET TWO LEATHER JACKETS FREE IF YOU BUY ONE. It’s essential for anyone who’s ever left their jacket at a bar after a lil’ too much whiskey & whatnot, which is a lot of people.

Fulton Mall runs on Fulton Street, between Adams St. and Flatbush Ave. It’s serviced by the A,C, N, R and F train to MetroTech, the 4,5 train to Borough Hall, the 2,3 train to Hoyt St and the G to Hoyt, Schermerhorn.