On the heals of New York pizza’s reputation being tarnished by “the Fyre Festival” of pizza parties, the 5 Boro Pizza Challenge is back and ready to redeem our gloried, well-earned status as the pizza capital of America – not one with pizza so bad it merits a state inquiry.

If you love to eat pizza, explore NYC without a car, and get competitive in the name of a good cause, here’s an adventure for you: the 5 Boro Pizza Challenge. Described as “like competitive eating had a baby with the Amazing Race,” the all-day event, to be held Saturday, September 23, entails traveling via train, foot, bike, or ferry — the only restriction is you can’t commute by car — to eat a slice of pizza in all five boroughs. It’s a way to both eat well and be active—which, really, should be the goal of any healthy New York weekend.

And while it sounds like a fun, slightly absurd way to spend a Saturday, it’s in support of a cause relevant to every New Yorkers’ interests: a fundraiser for Transportation Alternatives, the nonprofit dedicated to making it easier to get around this city by improving bike, pedestrian and public transit, in the pursuit of car-free living in NYC.

“My wife and I both bike to work, and we have a two-year-old son,” organizer Joe Cutrufo told Brokelyn. “We want him to grow up in a city where it’s safe to cross the street and ride a bike.” Can’t argue with that.

Cutrufo, a transportation planner and advocate for the Tri-State Transportation Campaign, has actually already been doing his own version of the race the past few years, just for fun, with his best friend from college, Mike.

“He’s the kind of friend who’s up for just about anything, so when I first had the idea, ‘Hey, do you want to try to hit all five boroughs and eat a slice of pizza in each one?” he was like, ‘Yup,'” Cutrufo told Brokelyn.

When the two of them would do it, he told us, they had another rule — drink a beer with every slice. “But I’m not imposing that on anyone. They’re welcome to try!” 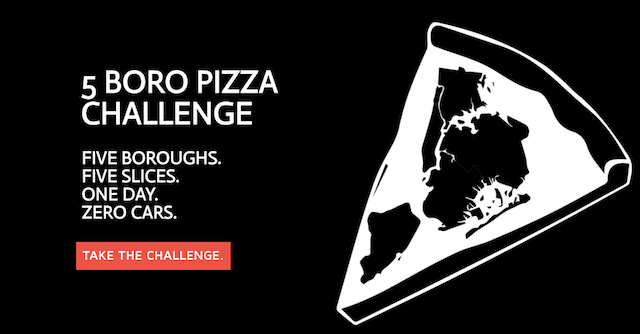 Cutrufo got the idea to open up the tradition to the public after signing up last year to run the NYC Marathon as a member of Team TransAlt, Transportation Alternative’s charity team. He thought it would be more fun to do the 5 Boro Pizza Challenge as a fundraiser, instead of badgering friends and family to donate.

Plus, he’s “a firm believer in their (Transportation Alternative’s) mission: to make New York’s streets safer for walking and biking, and to reclaim the city from the automobile, he told us.

To participate, first register here. $30 covers entry, a t-shirt and a finisher’s medal (for those who register by September 15). Then, on September 23 at 11am, everybody will meet under the arch at Washington Square Park, where they’ll be given a list of the five pizzerias — all slice joints — and their addresses. They can hit up the pizza places in any order they like, as long as they stick to the no-car rule—that means no Uber or Lyft either.

And to prevent any cheaters trying to skip out on pizza — who ever heard of such a thing! — the rule is to Instagram each slice using the hashtag #5boropizzachallenge, to prove you ate it.

At the end of the day, whenever you’re done, meet back in Greenwich Village for an after party, location TBA. The winners of the race — the first team or individual to arrive back at Washington Square Park — will receive prizes a variety of prizes, including bragging rights. Now, gimme pizza!

Wouldn’t you love all this Brokeing news in your inbox? Subscribe?

Get hit by Cupid’s arrow.