The news of Franny’s closing came fast and furious from many friends who were worried about me. “I’m sorry for your loss,” they’d text while linking me to the article that said my favorite Italian restaurant would close its doors in Park Slope on August 20. I was heartbroken and more emotional than I’ve been when actual (human) relationships have ended — 21 of them are listed below, all of which began with a first Tinder date at Franny’s.

While the majority of these men never even made it to a second date, I went on to court Franny’s passionately for four years; now I don’t know how I’m going to recover. R.I.P., Franny’s.

All illustrations by Madelyn Owens.

Ironically, I was introduced to Franny’s original location on 295 Flatbush via Tinder. My first Tinder date was with a nice chef with a dad bod who knew some staff members and hooked up an amazing meal. Sadly, the hooking up ended there because we had no chemistry and didn’t wanna smash. But I was infatuated with Franny’s from that point on. 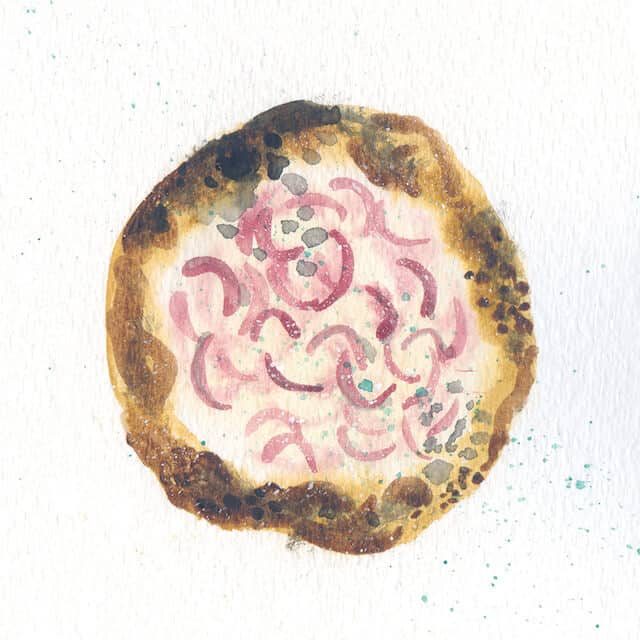 We had an amazing first date. He was charming, chivalrous, and handsome. The next morning, I woke up to a text from him that said, “Hey! Rented the car, packed trunk with beer. What time should I pick you up?” I was hungover on red wine, but the memories started flooding back: I had invited this man upstate with my friends for the weekend. I was excited when I initially got into the car, but that feeling quickly faded when he started loudly and confidently singing the wrong lyrics to every song. Imagine someone singing “from the walls, to the windows” instead of “from the windows, to the walls.” It was crazy. When we got to the cabin, he spoke over everyone and told jokes that only he laughed at. Beyond that, he started calling me babe and talked about our future; we’d known each other for 24 hours. When we slept together for the first time that weekend, he screamed, “WHOSE DICK IS THIS?!” I was caught off guard…”Um, your dick?” “NO, IT’S YOUR DICK. SAY IT!” “Okay, it’s my dick.” It was all wrong. He drove me home the next morning and took it well when I told him that I wanted to part ways. My friends still greet me with “Whose dick is this!?” to this day. 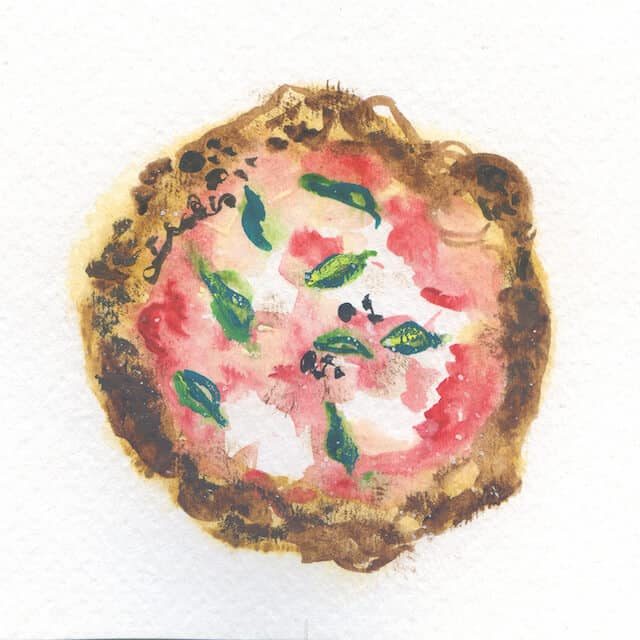 I like to arrive first, have a personality drink, and talk to my friends behind the bar. When I walked in at 7 for our 7:30 date, he. was. there. With a beer. “You’re early,” I chirped without waiting for a response and turned to the bartender. “I’ll have the wine on tap please, 500 milliliters.” For some reason I thought that was glass-sized, but to my surprise, it was two-thirds of a bottle. Despite my enormous drink, conversation was hard. Every time I brought up an interest or hobby like cooking and working out, he’d say, “Yeah, but that’s so expensive in New York.” I chugged every last one of those milliliters, had a slice, went Dutch, and insisted that his cheap ass take the leftovers home. 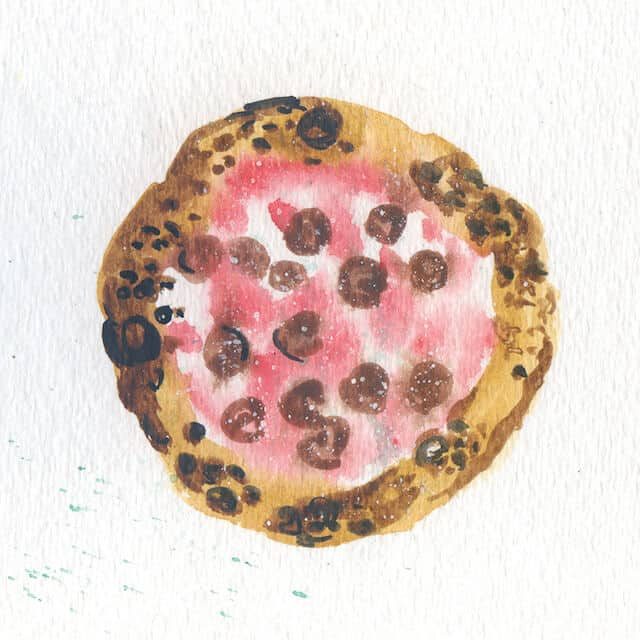 This bro lived in the East Village and gave me shit for having to come to Brooklyn. I ignored this warning and met him late on a Sunday. After too much wine, we went to Sharlene’s for an unnecessary nightcap, then back to mine. Without warning, he took off his clothes, then declared himself too drunk, immediately redressed, and left. The next morning, I woke up to a text: “Hey did I leave a navy Burberry sweater?” 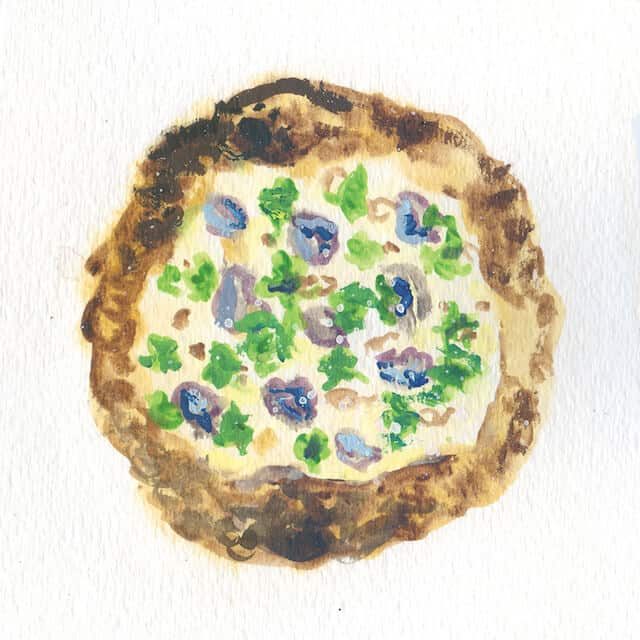 The fact that he didn’t like the clam pizza should have been a tip off that dating for several months would be an epic waste of time. 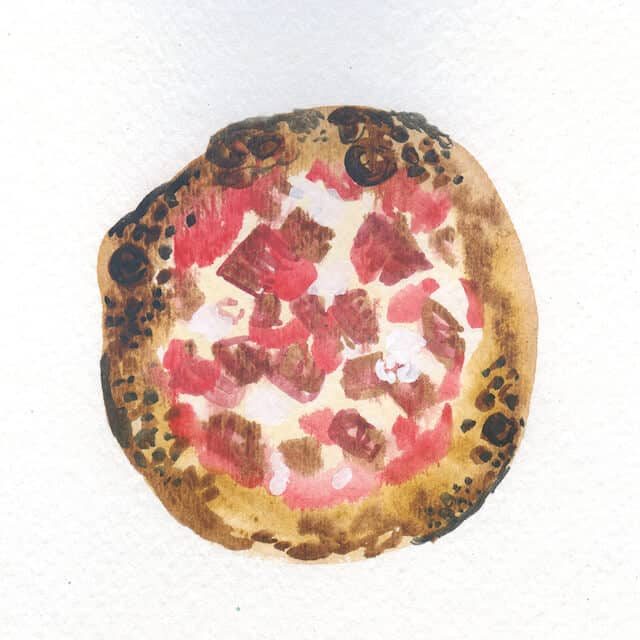 This idiot ate dinner before meeting me for a date at 7:30pm. So, as I ate one of my favorite Franny’s pies, he was uninhibited to talk exclusively about himself, his workout regimen, and his network of polyamorous dating. When I asked for the check, he lowered his voice to tell me he’d had a great time, but doesn’t do sleepovers on the first date. Even though I hated him, this presumption made my brain explode. In a fit of rebellion, I actually coaxed him into coming back to my apartment where he further turned me off with his sex voice, which was tuned to that of a Teletubby. Before he left that evening, he planned a second date—tacos the following week. Inexplicably I agreed, but when I showed up and he had already eaten dinner, I flipped the table and walked out. 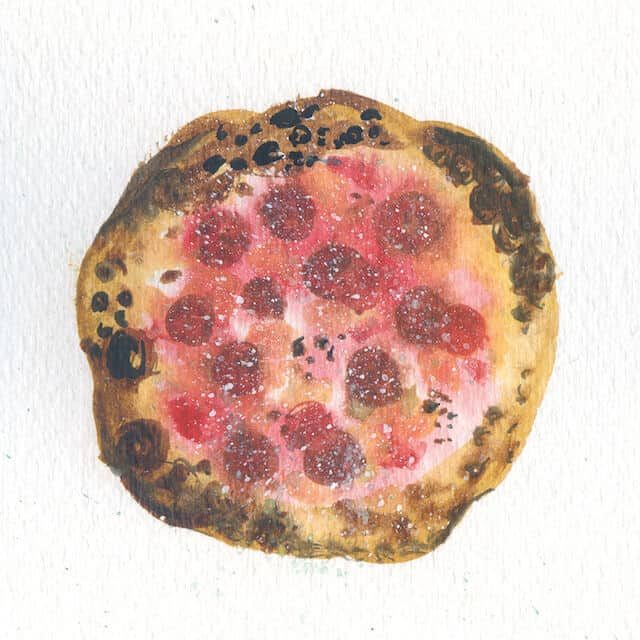 Okay so I didn’t actually meet this man on Tinder. He approached me on the subway, complimented my menswear leather tote, and asked me out before my stop. Even though I was dating someone else, I kept his number and asked him out a year later. By then, he was in a relationship. A year after that, he asked me out and we met at Franny’s. Now, the good part of this story is that romantic build up. The bad part is his epic ghosting that occurred afterwards. Or maybe he’ll just text me next year. 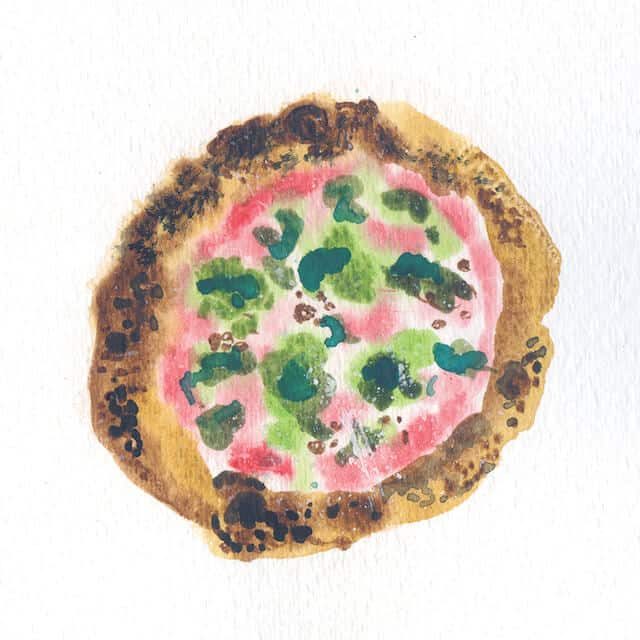 He wasn’t literally homeless…he said he lived in a one-bedroom in Park Slope. For a few months after a dinner at Franny’s, we “dated.” That is to say, he invited himself over to Netflix and chill, eat my food, and use my shower. I ended it via text because I thought the relationship was one-sided and felt used. Once I actually caught him using my deodorant. Goddammit, he really is homeless, isn’t he? 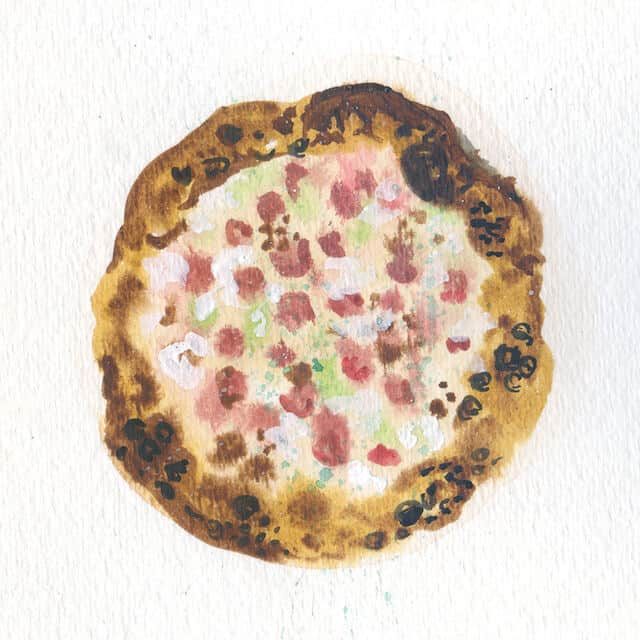 The Uptown Finance Bro is not typically my type (which encompasses everyone else on the planet), but when the UFB and I actually had an enjoyable dinner, I agreed to a second date. When that night came, he bailed last minute and I made it known I was annoyed. He told me that I couldn’t expect him to leave his friends to hang out, regardless of our plans. I mean, can you believe my nerve?

10. The Avo-Hater
Pizza ordered: none

We met for drinks only before a dinner that I had planned with friends at a nearby Mexican restaurant. We enjoyed easy conversation for about an hour, and when I was getting ready to leave, I mentioned that I was looking forward to the guacamole on deck; he replied that he didn’t like guacamole or avocados in general. I simply couldn’t understand this, basically refused to accept it, and unintentionally offended him deeply. We quickly parted ways without so much as a cursory hug. 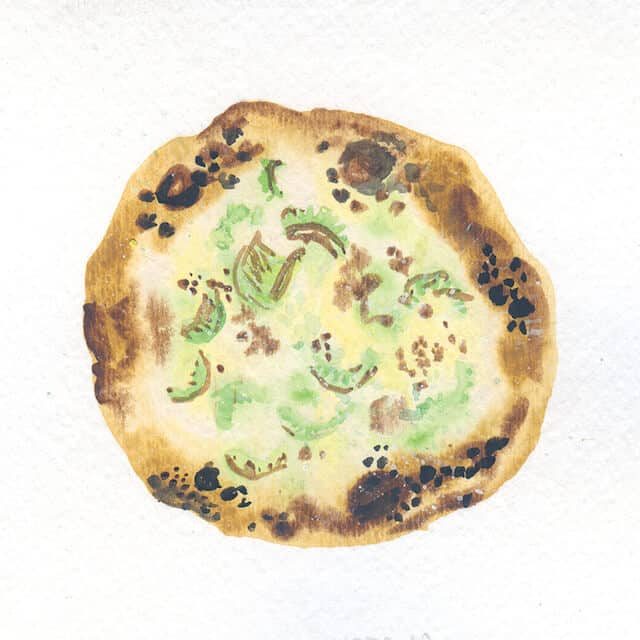 This is a non-Tinder non-date, but awkward enough to include in this list because Franny’s was still there for me. I’d had a great interview with an established creative director in New York, but the role wasn’t right for me. When I turned it down, I tried to soften the blow by asking her to dinner at Franny’s. She kindly agreed to this, but when we met, we were both like…what are we doing? And why? She lives in Seattle now, probably because of me. 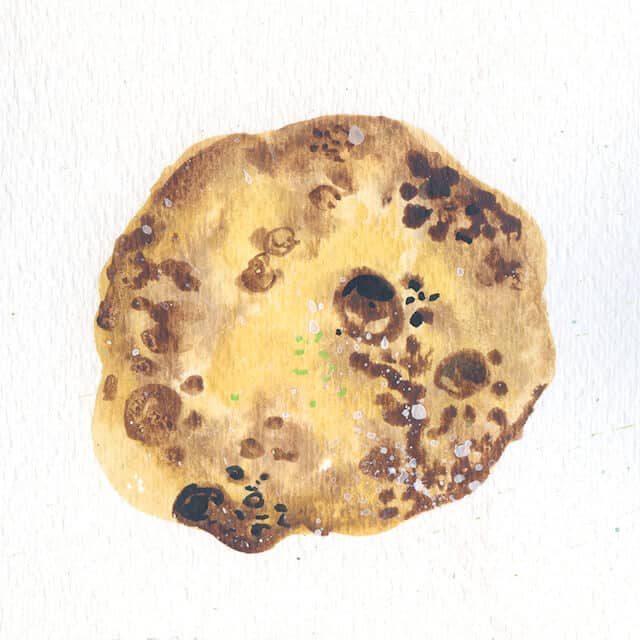 I drank too much at Soda Bar again that night. In my mind, I was tearing up the dance floor. In reality, I was a disaster who needed to be rescued. Cue The Cop who asked if I wanted to leave and get some food. I took him to Franny’s late night right before closing (sorry, guys!) for a blanket of carbs to soak up the vodka sodas. He later drove me home—in his cruiser—and asked to come upstairs. I said no. “But I am so thirsty,” he said. (Clearly.) I brought him down a glass, not a bottle, of water and closed the door before he could hand it back to me. I don’t miss that man or that glass. 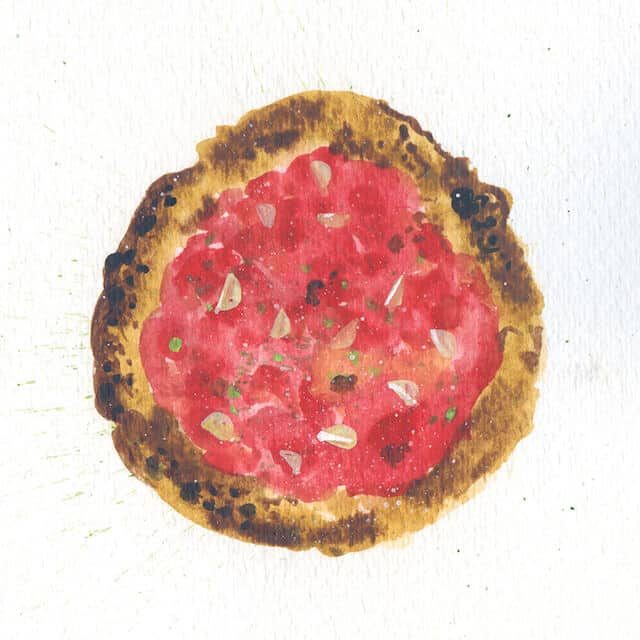 Met this very cute boy for drinks and pizza. It was clear we were vibing, so I invited him home. The next morning, he said, “It’s so funny, usually I date hot chicks, but I really like you.” Die, shithead. 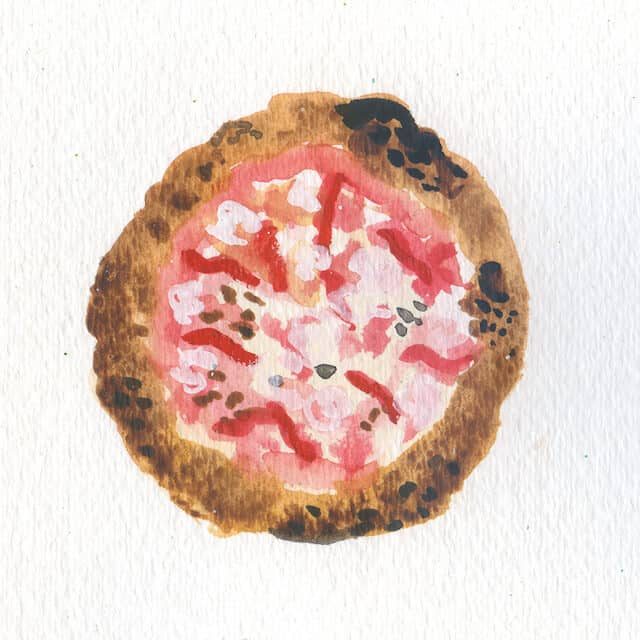 There is truly nothing wrong with this gentleman. Our first, middle, and last dates were all enjoyable, but his main focus is starting a family, whereas mine is pizza and wine. It would have never really worked, but I hope he’s doing well. 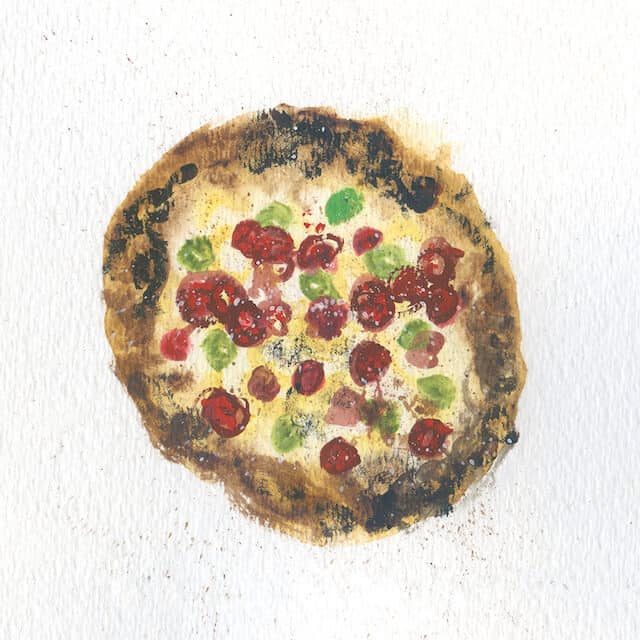 Hate at first site. He is Miami; I am Brooklyn. He is clubs; I am Franny’s. Over the course of our one drink, he told me that he was concepting an app, and when he found out that I was in the creative field, he asked for feedback. I replied that it sounds exactly like another app (it did), which he took poorly before faking a phone call and leaving. 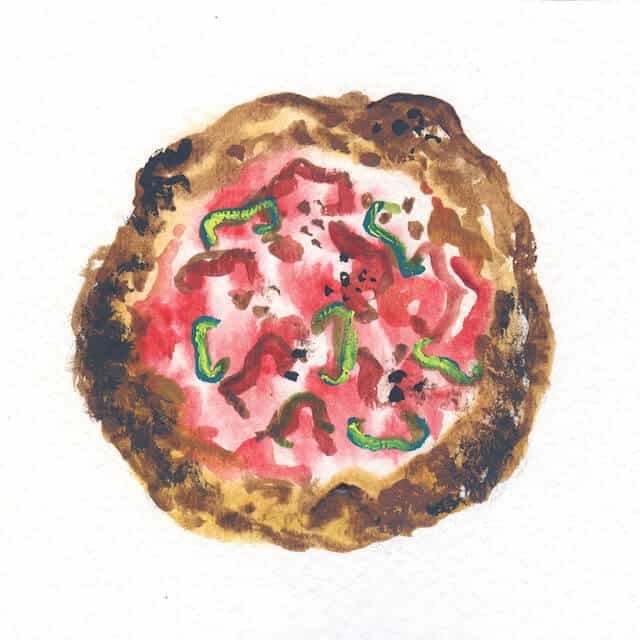 A first Tinder date cancelled on me, but I still had reservations at Franny’s for the night. I texted another Tinder match and said, “Sorry for the short notice, but you wanna meet for dinner in a half hour?” He agreed. Even though our connection was hollow, when he told me he was a ballet dancer, I knew it was on. It would have been a perfect one-night stand, except that plié-ing motherfucker forgot his passport at my apartment and I agreed to awkwardly meet him in Manhattan to return it and high-five goodbye forever. 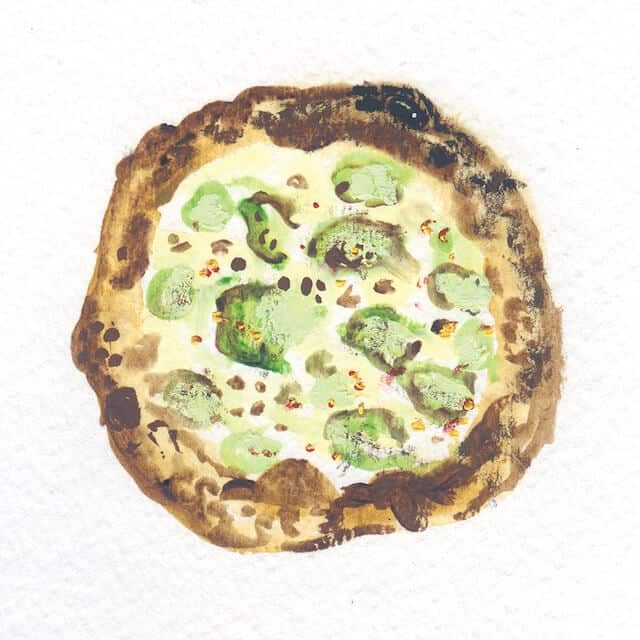 I thought he was cute, so I put up with a lot from this broke, spoiled grad school student with rich parents. Most notably: agreeing to repeat whatever he told me to say while going down on him. He particularly liked “Your dick is huge,” which, ironically… 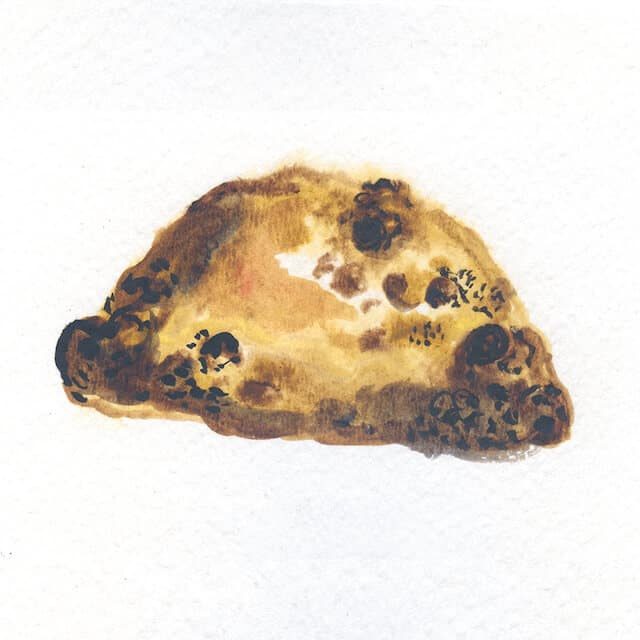 18. The Child
Pizza ordered: The Calzone

I went out with a girlfriend on what turned out to be Bastille Day, met a cute (drunk) Frenchman, and forced him to turn his back on his country by eating Italian food with me at Franny’s before making out on the sidewalk, finding out he was 18, and sprinting away screaming. 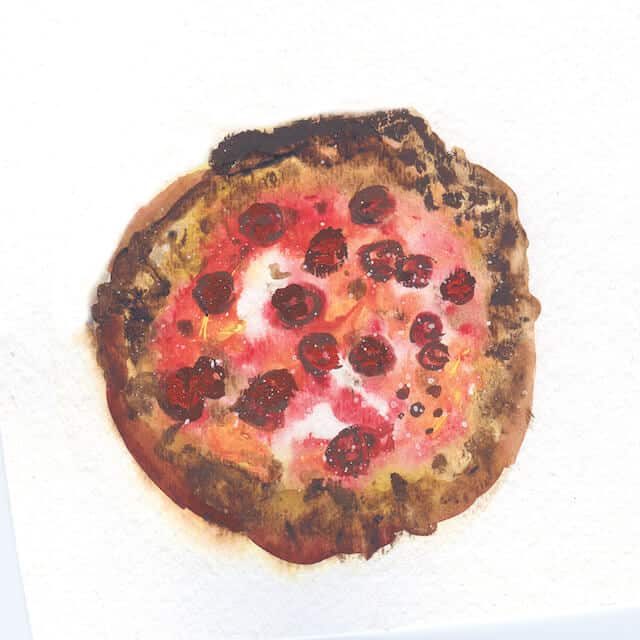 I don’t know what the fuck this man thought he was doing, but he didn’t look like his dated Tinder photos and hardly spoke English. Communication consisted of me smiling and nodding in response to what might have been German rambling. I drank one glass of wine and left a $20 and my dignity on the bar before hightailing it to another neighborhood spot for a solo dinner. 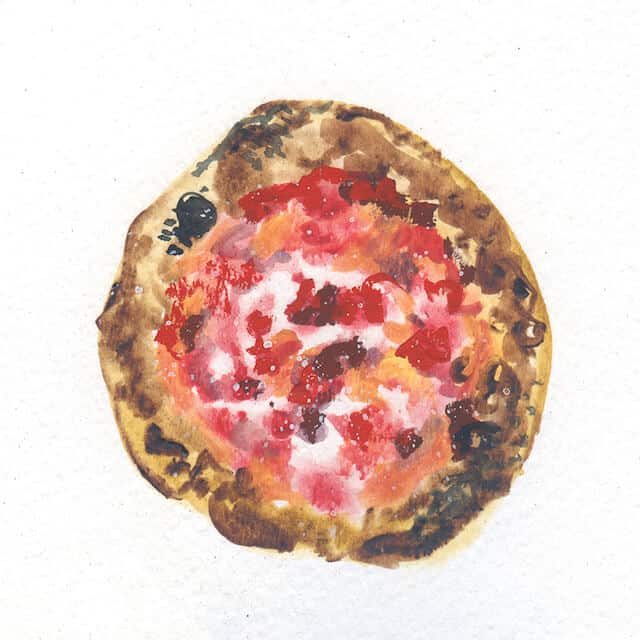 20. The Fuccboi
Pizza ordered: ’Nduja
I cannot believe this, but I actually volunteered to pay for this dinner in full for no reason. We had a fun date and sleepover, and when he walked me to the train the next morning, he said he’d love to hang again. Never heard from him. 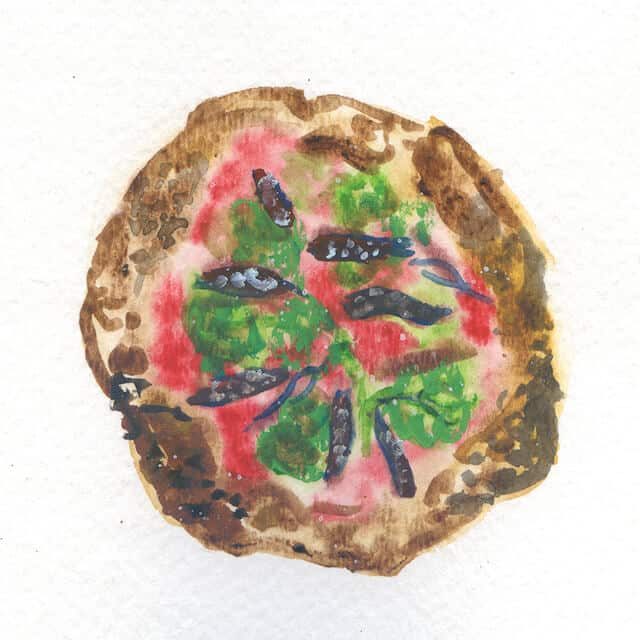 The Freak got his name from his freaky Tinder profile, which was nontraditional and very open, something I respected. We had a nice drink-and-din sitch, then went back to my apartment, where the evening progressed rapidly—we started making out, he mistook tingle lotion for lube, lined a condom with it, made a frightful face, and screamed “IT FEELS LIKE I’M FUCKING AN ICE CREAM CONE!” before jumping off the bed and running into the shower. We still see each other two years later.