“Your freezer looks like if your mom’s shitty boyfriend was trying to teach you a lesson. Like, ‘you’re going to eat all the ice cream!’.’’
—Judge Eric Silver

In 1982, President Ronald Reagan proclaimed July to be National Ice Cream Month. So too must we proclaim a winner of the 2016 Brokelyn Ice Cream Bracket. (Enormous respect for ice cream is pretty much the only thing Reagan and I have in common.)

Years of training (to eat ice cream), sacrifice (forgoing other food in favor of ice cream), and talent (at eating ice cream) have prepared us for this moment. One humid summer evening in Brooklyn, four judges tasted 24 flavors from 12 Brooklyn ice cream shops. The deliberations were tough, but the rewards were sweet. After hours of discussion, disagreements, and tummy aches, we were able to name a winner. Let’s take a look at the final scores. (Get caught up on the first four installments of the bracket here!).

The Winner of the 2016 Brokelyn Ice Cream Bracket is Blue Marble! Their Sea Salt Caramel became a favorite of the judges and pushed the shop to victory over the classic, Uncle Louie G. And while Blue Marble absolutely deserves the title, I’m impressed that a no-frills shop like Uncle Louie G made it so far.

But these are far from the only excellent ice creams in the borough. Here are the honorable mentions and the judges’ personal favorites:

Perhaps unsurprisingly, Uncle Louie G came out on top with their vanilla. It’s flavorful and familiar with a clean finish. This is the Platonic ideal of vanilla, perfect for a milkshake, sundae or just a simple scoop.

In an upset, Brooklyn Bell’s Black Lava Caramel was the highest-rated Popular Flavor in the competition, squeaking past Blue Marble’s Sea Salt Caramel by a few hundredths of a point.

As Brokelyn’s official ice cream experts, we couldn’t pick just one (particularly after trying 30 flavors). Whether or not they made it to the end, these are some of the flavors that will be topping our cones this summer. There are some commonalities here, as well as some of the vegan flavors. Personally, just limiting this to three was one of the hardest decisions of the bracket.

With so many caramel flavors in Brooklyn, it can be easy to get confused. Here’s a handy chart and taxonomy to find your favorite! 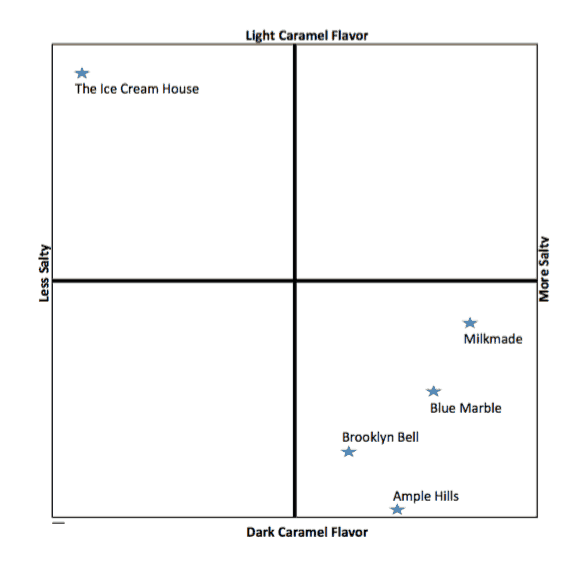 The Ice Cream House’s Dulce de Leche: Vanilla ice cream base with caramel swirls. Think of this as your water wings before diving into the Dead Sea of salted caramels.

Blue Marble’s Sea Salt Caramel: Not as dark as Brooklyn Bell, but darker than Milkmade. Smooth with a buttery caramel flavor.

Throughout this process I found so many ice creams I loved. Full disclosure: for years I’ve been ride or die for Salted Crack Caramel, and while I still love it, I’m ready to diversify.

It was fascinating to taste the subtle differences in similar flavors. And to see the differences in the judges’ choices. Our opinions are based on flavor, sure, but also years of personal experiences with ice cream — the dripped cones of childhood, and the individual taste of summer.

I’ve also developed a much deeper appreciation for vanilla ice cream, which is unfairly maligned as a synonym for boring and unimpressive. But the best vanillas — like many we tried — have a rich vanilla bean flavor and much-needed versatility. It is the Magic Johnson of flavors.

At the start of this I feared that I would become sick of ice cream, but I’m not. Far from it. Trying so many flavors has made me want to eat more. While this bracket only covered two flavors per shop there are hundreds of ice creams in Brooklyn, from old standards to small-batch artisanal selections, neighborhood staples to hip startups, Peaches & Cream to Malt Maitake Peanut. Brooklyn ice cream is as diverse as Brooklynites. And for that, Brooklyn ice cream shops, I thank you. All of you.