It turns out not all those Williamsburg waterfront developments are for the super-rich condo set. If you’re not opposed to living 200 feet from the Williamsburg Bridge, then this could be the deal for you. A new affordable housing building, 15 Dunham Place is going up in Williamsburg with some fine amenities and some staggeringly low rents. Depending on your income, you could pay $474/month for a studio apartment or $623 for a two-bedroom in a 14-story building with a gym, laundry, bike storage and a roof deck about a block from the East River, according to Curbed. There’s a few catches, of course, one of which is that it’s built on a “former gas station and toxic spill.”

You also have to meet the byzantine minimum and maximum income requirements (listed below) and apply to the New York City Housing Development Corporation in the next six weeks. Apartments are awarded to those randomly chosen from the flood of applications and who meet the requirements. And while you live there, you’re going to have to keep proving to them that you’re living just above poverty level.

Doing the math, we found that out of 160 units in the building, 79 are available for affordable housing. The rest will be sold at market rate, as condos, we assume. So that probably means that the apartments with the best views (that is, not bombarded with bridge noise day and night) will go to the highest bidders. But, hell, we haven’t seen a studio going for less than $500 in Williamsburg since 2001; it might be worth all the paperwork and rich, snobby neighbors. 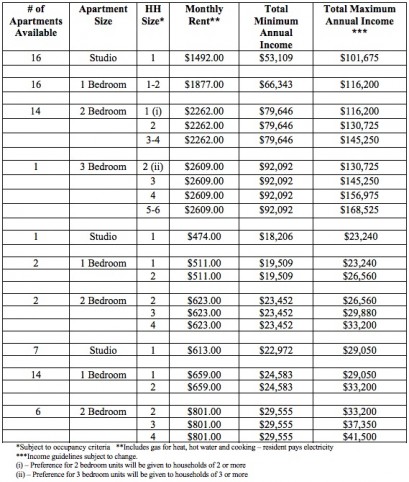 Follow Conal as he shakes his fist angrily at condo developers: @conaldarcy.

Brokerlyn: Nothing over $2,500/month in Cobble Hill

Brokerlyn: Apartments at $2,100/month or less in Bed-Stuy

Check out these six spaces.