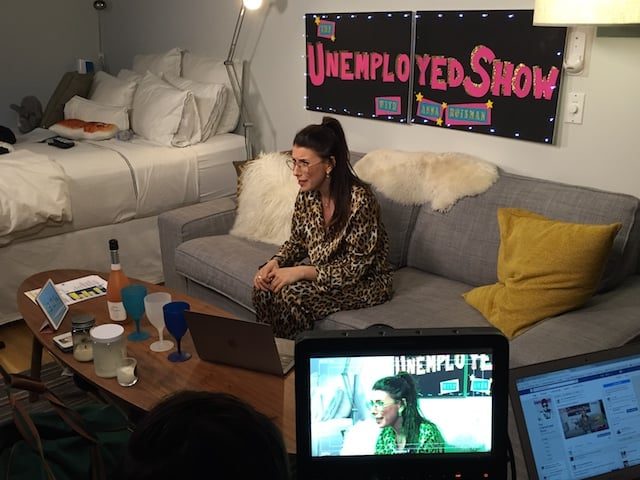 Most people think unemployment isn’t a laughing matter. Some people even won major political offices (ahem) in this country predominantly on the backs of people out of work. And yet, when Anna Roisman learned that she would be losing her job on November 8, a day that resonated worldwide as one of existential dread, her first thought was to turn her experience into a talk show on Facebook Live. Only a few months later The Unemployed Show premiered, and it wants you to know that it’s here to help.

A hybrid of Wayne’s World and Kathie Lee & Hoda, The Unemployed Show takes place in Anna’s studio apartment, taking viewers straight to her couch, where she greets people in her pajamas — the unofficial dress code of those who don’t have a 9-5, but the official one for all guests on the show. Clocking in at just under an hour, the show maintains a fast pace for its medium, providing a monologue and bringing in guests for segments that range from vaguely service-y (couch workouts to avoid a costly gym membership, cooking segments to make cacio e pepe) to pure silliness (like dramatic readings of awkward text exchanges from dating apps, crowdsourced from friends). And of course every episode involves some sort of drinking, which serves double-duty as lubricant for a live performance and payment for friends taking time out of their schedules to come hang out on a couch in front of Facebook for the afternoon.

For a medium that’s pretty ubiquitous of late, not a lot of people know what to do with Facebook Live. Sure, actual media companies have come to treat it as just another venue for produced content (Buzzfeed’s “What happens to a watermelon when you wrap it in rubber bands” aside), but most of what you’ll find on your feed is people broadcasting from their phones, like a real-time Snapchat story. In the talk show category, not many are on the radar, though comedian and early YouTube star Jeffery Self’s Jeffery: Live has received some coverage, and also happens to take place in the host’s living room. Jeffery: Live and The Unemployed Show have more than that in common, as both came as a response to setbacks with work (Self had a pilot that fell through) and a desire to be productive and keep busy. For Anna, Facebook Live seemed like an opportunity to try something new; as a comedian she had produced and starred in comedy videos and hosted live shows at venues, but she had yet to create a talk show. “I didn’t know what I was going to do with my new free time, so I thought I’d put the two together,” Anna told Brokelyn. “I approached my friend (now technical director) Brian Russo, who is a sound engineer…[and] said something like, ‘Hey I really want to do this show about being unemployed…but I want to make it look super professional and tight! Not on a phone!’  He said that he was really interested in exploring this whole ‘Live’ feature too and liked my idea.”

The result has been a show that, while young, has continued to grow with each airing, once a week on either Thursday or Friday, depending on Anna and her crew’s schedules (in true keeping with the theme of unemployment, there’s nothing entirely certain about the airing time). Though there’s clearly traces of daytime talk and late night shows, as well as the occasional antics that feel more at home on a radio show (TUS has done a few prank call segments), The Unemployed Show often ventures into the realm of a support group for kindred spirits. Anna is unemployed and looking, and her crew is composed of others who are unemployed, underemployed, or who freelance, and segments like Anna’s To-Do List and Advice offer sincere tips on maintaining morale and self-care while masquerading as the self-deprecating humor of a person who is actually going through the same shit. “I intended this show for an audience of people who feel lost during the day,” says Anna. “It’s a fun escape. It was really scary going from a 9-6 job to nothing. And every time I’d go on Facebook throughout the day…I would just see horrible things going on in the news and wanted a break from it. I thought, ok, maybe I can be that break!”

These are all sentiments that might seem pretty familiar to creatives who find themselves with a lot of unwanted free time on their hands, and also happen to face the constant influx of rejections that an earnest job search can entail. The elements that coalesced into The Unemployed Show coming together, however, came from not only from this impulse, but from the desire of like-minded people to collaborate and make a high quality weekly broadcast for no money. TUS has a revolving door of crew members based on availability, but on the day Brokelyn visited the set there were 8 people in the tiny Williamsburg studio, composed of a technical director, three camera operators, social media/sidekick, host, and two guests. Added up, that’s a shitload of time commitments, not to mention the work that Anna and Brian put in prior to each filming day. Russo, a sound engineer on Good Morning, America, serves as the technical brains behind the show, constantly pushing the limits of their setup. While he has a somewhat steady day job (GMA hires staff as contractors, so they are always at risk), Brian’s afternoons are free to dedicate to the show, and he seems to be as committed as his host. All of the equipment, including cameras, lights, wireless mics, and a switchboard to control the feeds coming from each camera, belongs to Brian. He even sold one of his cameras to buy two for a three-cam setup especially for this show, but with an eye to future streaming in general.

The show’s social media manager, Ian Griffin Adams, is unemployed like Roisman, having previously worked for Viacom. In addition to managing socials, Ian also happens to serve as Anna’s sounding board and general off-screen voice of God, calling out comments and viewer spikes during show segments. His reason for joining the show can be boiled down to a simple ethos. “First episode, [I thought] this is right up my alley,” Ian told Brokelyn. “It’s the kind of thing where seeing something that’s awesome, instead of feeling envious or wanting to compete with it, I want to be collaborative and be a part of it.”

The show is not just a labor of love: it is also a testament to the collaborative spirit and working with whatever limited resources you’ve got.

Despite being heavily confined by the very real physical boundaries of the show, The Unemployed Show tries new ideas each week. They now feature pre-taped digital shorts, which people are encouraged to submit. These serve to maintain the pace while also buying the crew a much-needed three minutes to switch out mics on guests and set up lights and cameras on the kitchen for a cooking segment. One segment, “Clay Makin’” featured Anna and her guest using clay to sculpt likenesses of dick pics that Anna’s female friends had submitted to the show (presumably from their own collection), which cleverly sidestepped Facebook’s rules regarding nudity. Moving forward, both Anna and Brian have their own plans for expanding the show, and figuring out the logistics that come with new and more ambitious features. Brian hopes to one day feature bands performing live on the show (did I mention how small this apartment is, on the live studio scale?) and Anna wants to film a segment from her bathtub.

Depending on your own personal situation, the idea of a show made by and for unemployed people (and bored people at day jobs with an hour to burn) might seem either inspiring or just plain frivolous. After all, there’s a real tension at stake here. Everyone has rent to pay, and working on something that actively detracts from a job search (and could actively compete with future jobs) seems a little like running to get sticks and marshmallows for s’mores when your house has caught fire. But for Anna, it feels quite the opposite. She enjoyed a lot of perks at her day job as an office manager, and when she was laid off she received a pension that would keep her afloat for some months. That’s bought her time to work on her video resume for a more coveted position in video production, and each week producing and hosting a live show builds that resume. She of course hopes that The Unemployed Show itself can turn into a paying gig—a running gag on the show is that she hopes the company behind whatever product she’s consuming will become a sponsor—but in the meantime she’s opened herself up to opportunities as a performer. She’s already gotten a few gigs (one even paid!) hosting Facebook Live shows for Elite Daily and the Upright Citizens Brigade.

In the meantime, Anna and her crew spend their time on TUS treating it like a real job, though it might only pay in hummus and rosé. Each airing is followed by a post-production meeting to go over notes for the show, to talk about where things might need tightening, and to do real analysis of viewer trends during the show—one advantage that Facebook Live offers over network television or cable. They can see when more people seem to be tuning in, which is why they’re likely to do more cooking segments, and is also part of the drive behind Anna’s bathtub pitch. Since doing the show, she’s learned the old adage is true. “Sex sells,” she says. “That’s not even a joke!  Literally anytime we mention sex, body parts, or have someone on in their underwear (it’s happened), our views spike.” All things considered, it might be one of the more productive hours anyone could spend in their pajamas, waiting to get an interview.

Catch the Season 2 premiere of the The Unemployed Show this Thursday, 5/4, at 3pm on their Facebook page, and check back to find out future show times, or if anyone managed to get a job.