In 2014, I went on Tinder for three weeks and all I got was a host of creepy messages, some boring conversations and a tumultuous six-month relationship. A few months ago, I went on Tinder again and got mostly nonthreatening messages, a couple of fun dates, and a renewed faith in my fellow man. What’s my One Weird Trick for using Tinder and not consequently wanting to despair-throw my phone into the Gowanus? This time, I was on Tinder as a Waffle House. Here’s what I learned.

I was swiping left on everyone until my mom asked me what happens when you swipe right. And lo(l)! The matches started rolling in. Even more confounding, I started getting messages. 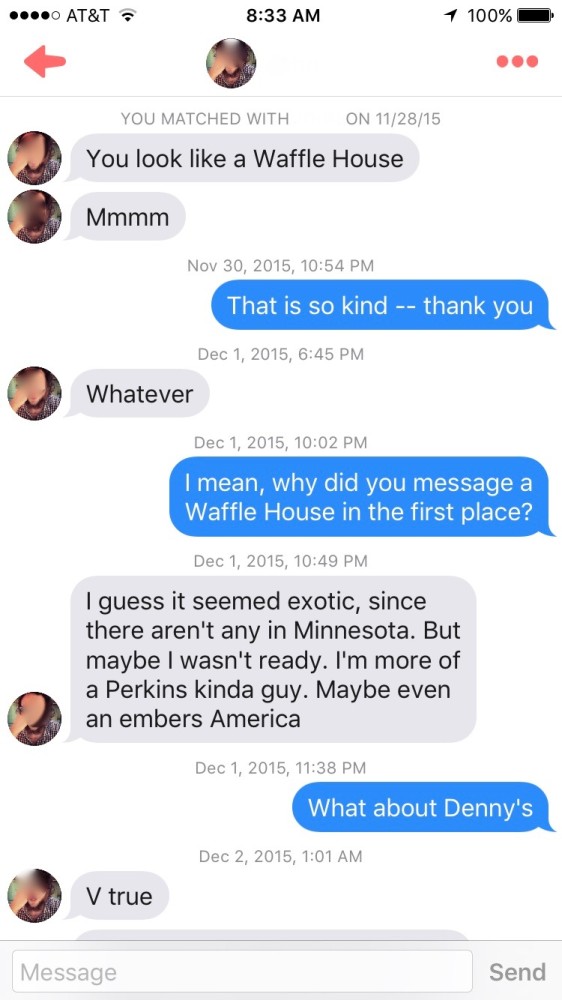 So after I got back to Brooklyn, I kept Waffle Housing my way through Tinder, swiping right on cuties. Over a couple weeks of sporadic use, my profile racked up more than 150 matches and something like 50 first messages. And mostly, they were from people who did not horrify me in any important ways.

Some guys were just confused: 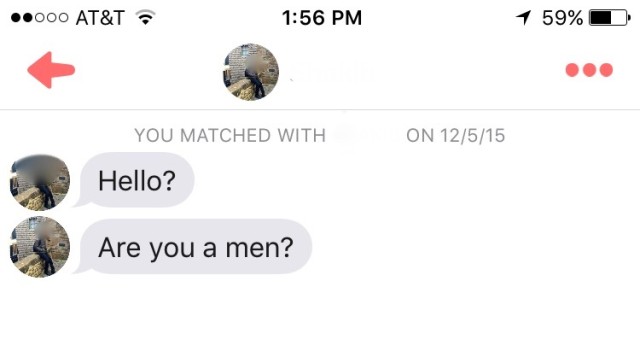 But most people jumped right into addressing me as America’s Place to Eat. 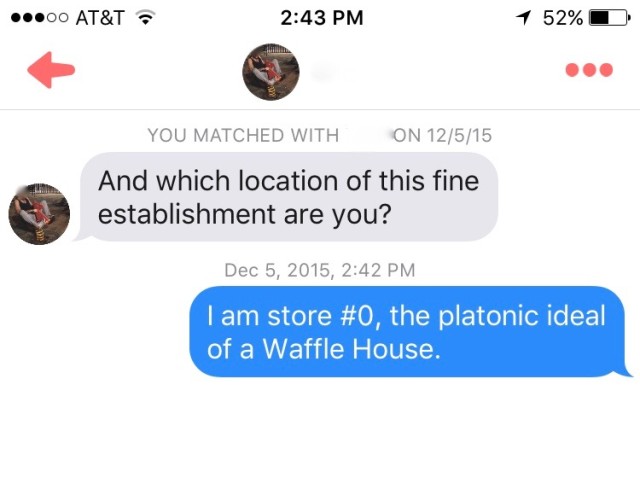 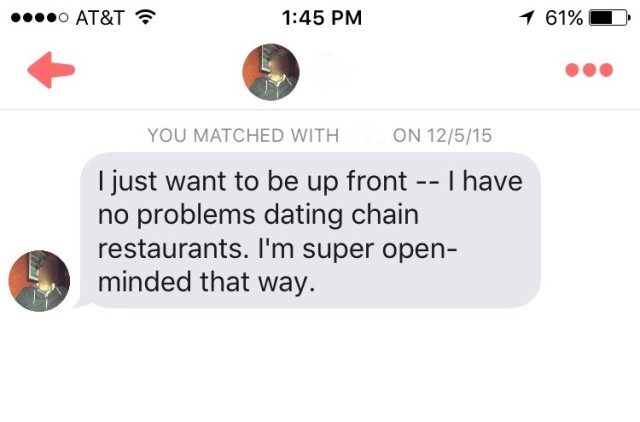 Look, I can only compare this experience to the brief time I was on Tinder with pictures of myself, and to my girlfriends’ and the internet’s horrifying anecdotes. But let’s draw some nearly baseless conclusions anyway.

So here is what I learned about dating from being a Waffle House:

1. Dating apps are better when you do not have a human body, probably

The most common Tinder messages you get as a woman interested in men are: efforts at jokes, efforts to connect on points of perceived mutual interest (e.g., whiskey or marathons, usually, I guess), “hi,” and Uninvited Sex Stuff.

The most common Tinder messages you get as a Waffle House interested in men are: efforts at jokes, efforts to connect on points of perceived mutual interest (e.g., fried staples of southern cooking), “hi,” and hashbrown orders. 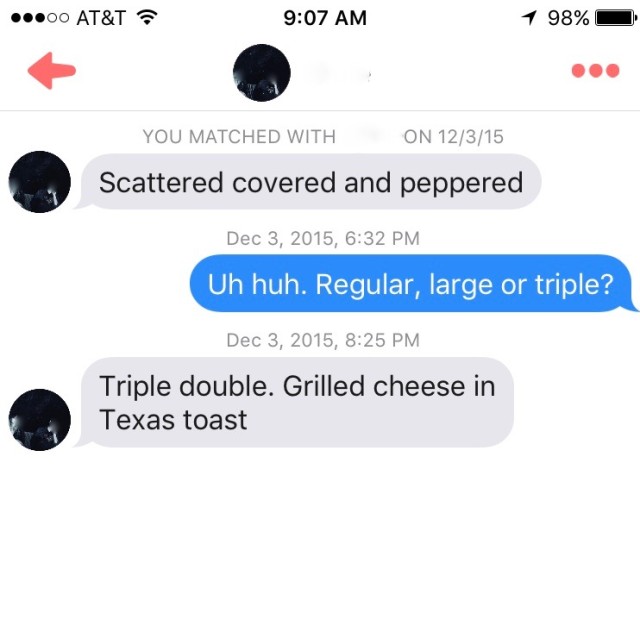 Also, it turns out a good way to elicit fewer unnervingly specific sex-invitations on a dating app is to be a restaurant, which people typically associate with fulfilling a totally separate physical need (hashbrowns).

I asked a friend why he thought people were bothering to message a Waffle House.

“Obviously,” he said, “they’re trying to fuck a Waffle House.”

But mentions of sex were surprisingly rare. The repeat customer below sent the objectively worst Sex Stuff I got: 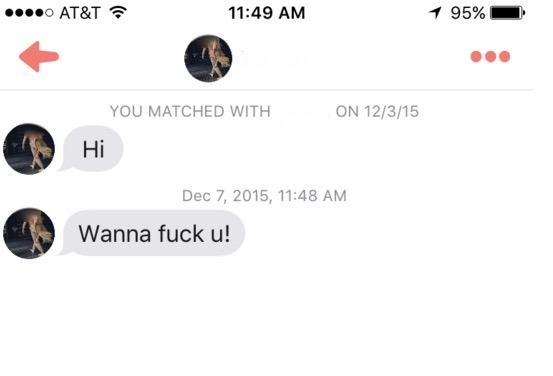 Although if, like me, you consider poorly executed innuendos the lowest form of Uninvited Sex Stuff, this is actually worse: 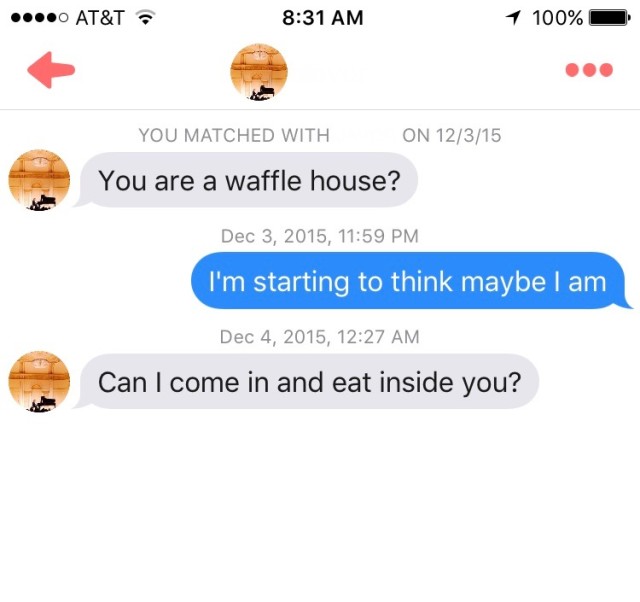 And this guy was just one of several mining the hashbrowns-sex nexus for innuendo gold: 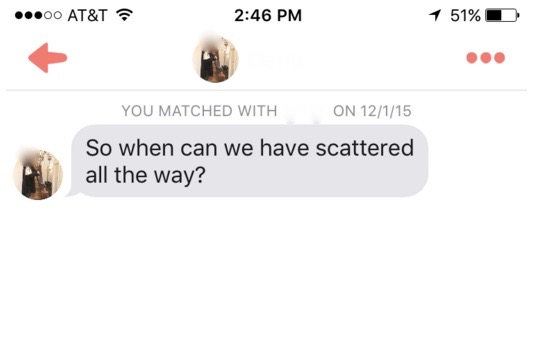 But no one said anything less genteel than that. (Oh god, am I setting the bar too low? Let’s move on.)

People LOVE the Waffle House, and they really want to talk about it. 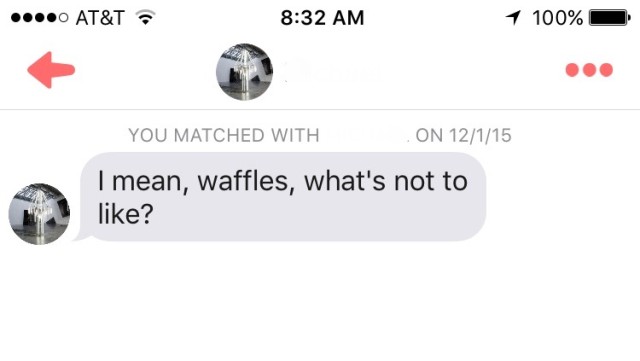 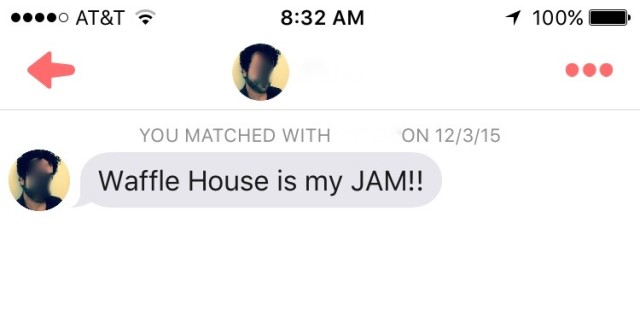 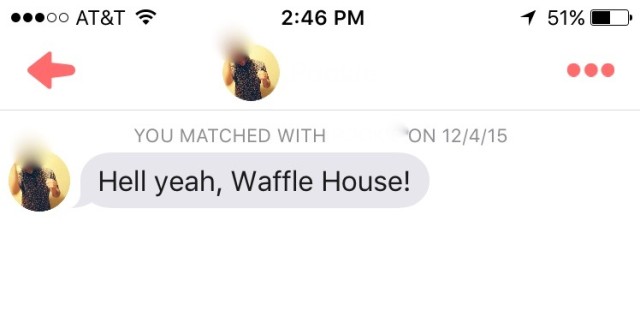 Which is probably why I slowly started identifying with Waffle House and taking the affection to heart, like somehow I’d earned it just by affiliating myself with a beloved brand. And it felt great! 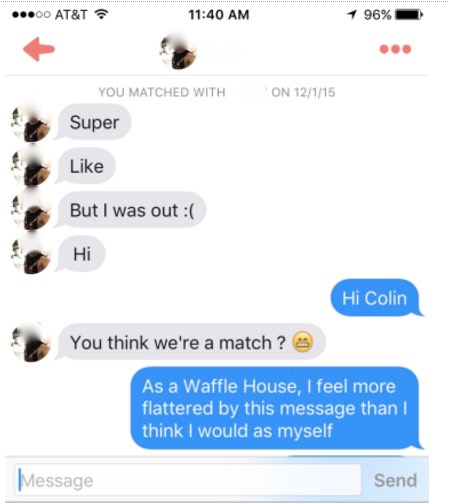 Personally, I’ve only eaten in Waffle Houses twice. None of the more than 2,100 outposts are as far north as Minnesota, where I grew up, and, of course, there’s not one here, either, because we live in IHOP America. But my Tinder matches volunteered many valuable facts about Waffle House’s colorful history and charming folkways.

One single match shared the following alleged facts, none of which I have checked: The guys who wrote the Pacman theme “spent their twilight years” writing songs for Waffle House, a former company president’s wife ran the in-house production studio for a time, and after Usher complained that his single wasn’t on the jukebox they put it in. I wonder if they’re true!

Also, have you heard of FEMA’s Waffle House Index?

The matches I talked to skewed smart, funny and a little weird. Definitely weirder than the guys who swiped right on my actual face in 2014. Also, they were disproportionately from Georgia.

I ended up chatting with a guy whose bio was the name of my neighborhood and the shrug emoji, and, after a respectable interval, he asked me if I wanted to get a drink. Without having any idea what I look like.

A few days later we met up at a bar near both our houses, and he was as cool and engaging and transparently good-hearted as you’d expect the kind of guy who asks out a Waffle House to be.

Reader, I married him.

No, JK, but I think we’re going out again.

So what’s the takeaway? This Girl Went on Tinder as a Waffle House and it Restored Her Faith in Something-or-Other, or something?

I guess I don’t really know. But in my shriveled up heart of hearts, there is one takeaway I’m hoping is the wrong one: That lots of men are way, way less capable of being respectful to women than they are to a roadside vendor of breakfast foods.

For the most part. 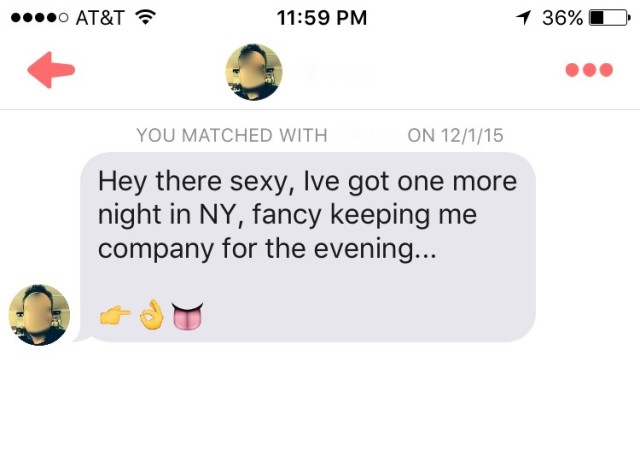