A Friday the 13th in the month of October? A double spooky whammy. And with the weather eerily warm, what better time to take advantage of this fear-based holiday season and treat yourself to a discounted flash sheet tat.

Yep, the best sale in Brooklyn is back, and covering up your ink now means it’s far less likely to peel and scab in the hot sun as it heals. By the time you unveil it to friends during the cold winter months it’ll be as black as the heart of our presidential administration!

Also, not to alarm you or anything, but this is the second of  only two Fridays that are also the 13th in 2017. You made it to the second one, and that alone merits you a tat. Hashtag Trump’s America. Hashtag ink again. So go to any of these fine tattoo parlors to get yourself some ink for, in most cases, $13 plus a lucky $7 tip.

Evil and Love (211 Franklin Street, Greenpoint)
Evil and Love just opened up in 2013, but they’ve already developed a loyal following and this Friday the 13th they’re showing just how diehard they can be with multiple flash sheets per each of their six artists. All tattoos start at $60, but you’ll have your pick of color, dot work, an entire sheet of naked people, and strictly no 13s (but skeletons and spiders aplenty).

Body Art and Soul (95 Morgan Avenue, Bushwick)
Another year, another Friday the 13th, and Body Art and Soul is delivering as per usual with 100s of arms and legs designs to pick from, $20 per and cash only. Pretty sweet flash sheet, too, in our humble and partially tattooed staff’s opinion. They’re only taking the first 40 people at the door so come hella early (as in, way before 1pm) to get your name on the list.

Triple Diamond Tattoo (257 3rd Avenue, Gowanus)
Want a $13 tattoo at Triple Diamond? Best play by the rules they set out last year, which include: a $7 tip, first come is first served, no altering the flash sheet designs, no tattoos on hands, necks, feet or ribs and don’t kill their damn vibe. It’s almost guaranteed you’ll be waiting in line for this one, so show up as early as possible (as in, way before 1pm) to get as far up the line as possible. FYI, the weather says rain, so dress for it.

Armageddon Ink Gallery (7 Meserole Street, Bushwick)
Armageddon receded onto Meserole Street last year in order to let yet another yuppie brunch spot open up on Union Ave., but you can still get inked with them this Friday for $13 + $7 mandatory tip. They’ve upped their ink squad and have a history of offering over 250 new tattoos on any given Friday the 13th, one of the busiest shops in Brooklyn for the unspoken holiday. Open at 10am, so get there. Max of two tats per person.

Citizen Ink (2083 East 16th Street, Sheepshead Bay)
Above, you can see just the flash sheet that our pals at Citizen Ink are offering for their $20 tattoo deal. They’ll be doing first come first serve, walk-ins only, from 1 to 9pm. Plenty of death and clowns to choose from as well as the less morose seahorse and rabbit option.

Gnostic Tattoo (1089 Flushing Avenue, Bushwick)
Gnostic’s Friday the 13th deal went up to $31 back in January and it’s staying there this 13th as well. But NYC tattoo prices being what they are, that’s still a pretty good deal. And there’s some pretty cool stuff on this flash sheet. Noon ’til 8pm, first come first serve.

Abuela’s Tattoo Parlor (608 Myrtle Avenue, Bed-Stuy)
What’s Abuela’s planning on inking you with? They’re not telling ’til day of, but you’ll have a whopping 13 hours to get in on the $20 special ($13 plus $7 tip). Cash only, so hit the ATM on your way! And we suggest getting there well close to when it opens at 10am. There may already be a line but the earlier you get there, the earlier you can put yourself down on the list. It’s very important to lead the pack in the $13 tattoo competition. Sunset Park Tattoo Studios (476 47th St., Sunset Park)
Get one of these deliciously taboo designs on your body, 2.5 inch maximum, for just $20. There’s lots of other designs too, but those are only available at the shop, so you’ll have to go to know. They went hard with the 13s, and every single design on this sheet features ’em. Sunset Park Tattoo Studios will open at 11am on Friday and it’s first-come-first-serve, but we suggest getting there early to line up with the rest of South Brooklyn. 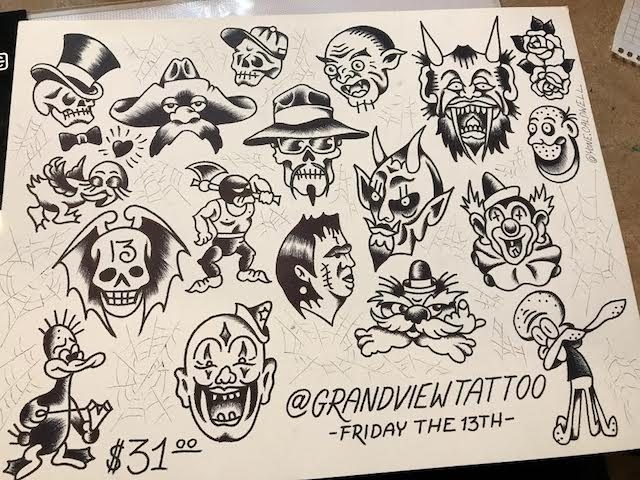 Grandview Tattoo (53-38 Metropolitan Ave., Ridgewood)
Just over the borough border in Ridgewood, Grandview Tattoo is offering a flash sheet of creepy classics all day Friday. Grandview is “the wicked step child of the O.G. Queens tat shack R&D Tattoo,” in their own words and has been inking locals since 1997. They’ll be opening at 2pm, $31/tat.

For a more expensive option:

Magic Cobra Tattoo Society (775 Driggs Avenue, Williamsburg)
The Magic Cobra has gotten much pricier with their spooky deals this year, doubling their January, Friday the 13th price to $100 for any palm-sized, full color flash sheet tats, available on a first come first served basis. Cash only. We know this is an article to help you get $13 tattoos on Friday the 13th, but not everyone believes in symmetry like that. 12pm ’til late.