It was barely six weeks ago when Hurricane Sandy turned lives upside down for thousands of New Yorkers, many of whom are relying on relief organizations and volunteers just to get their lives back on track, and none of whom care in the least bit how much of a deal you got on that 3D television while applying a Croc to some person’s throat. Local artists, designers and merchants have stepped up since the storm, offering a bevvy of items whose profits go to benefit Sandy relief organizations, from shirts and hoodies to jewelry and posters. Be a Sandy Claus to someone on your list by buying one of these items this year.

The shirt was designed by Manhattan’s Sebastian Errazuriz, whose studio was knocked out during the storm. The idea for the design came after he saw the water line from the flooding on the walls of galleries around the city. A second design applies the water mark to the the subway system. All of the profit goes to Sandy relief.

Even those of us who grew up in and around the Jersey coast who spent most of our formidable years badmouthing the region and trying to escape it have been grieving after watching our childhood memories ripped from the boardwalk and thrown out to sea. This shirt by Jerz-based surf company Jett illustrates another truth about NJ: even though the Southern part of the state is better, North Jersey gets all the attention.

Every New Yorker gripes when a new made up neighborhood shows up on the map (RAMBO, anyone?). But SoPo is one people embraced when it stood for South of Power, aka the part of Manhattan that was blacked out during Sandy, which banded together in ways not seen since 9/11. The shirt is sold for Sandy relief by Selfless Tees, which is sort of like Kickstarter, but for charity and with T shirts. So not like Kickstarter at all. 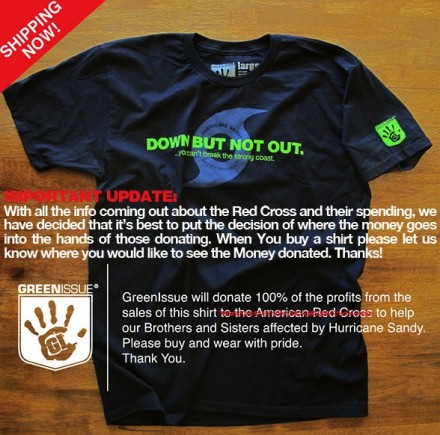 Down But Not Out tee by GreenIssue, $20

These shirts were originally intended to benefit the Red Cross, but after all the bad press came out about the bumbling organization (see: bag full of broken hamburgers), skate company GreenIssue decided to open up the charity more. If you order a shirt, tell the company which charity you want your money to go to. Hint hint hint.

Like New Jersey, Long Island takes its share of ridicule from city dwellers. But, like New Jersey, it got rocked during the storm. Buy this one for the suburban friends on your list and assist groups that are providing direct Sandy relief, and let’s all agree to make fun of Connecticut for awhile instead.

For every shirt purchased, Dentz Design will donate a $10 gift card to local shelters and other groups providing Sandy relief. Dentz also offers a “My Heart is Down The Shore” (which, ugh, is a phrase you should say only if you want to immediately out yourself as a tourist) shirt (And for your non-Sandy needs, there’s this Hipsta Please one too.)

Despite all the tragedy, being a New Yorker did we all not feel pretty friggin great to be New Yorkers? That was when we watched friends, neighbors and strangers pick up shovels, run supplies up 14 flights of stairs and open up their doors, kitchens and wallets to storm victims. That should be enough to put the myth that New Yorkers are uncaring jerks to bed forever. All the profits from this “Unity” shirt from local company 7Line will be sent to Breezy Point, Staten Island, Rockaway Beach, Long Beach and other hard-hit towns.

United for Blue is an organization that vows to remove one pound of trash from waterways for every shirt purchased anyway, which, if you’ve ever surfed, swam or played in our waters, you know is a weighty task. Now they’re giving 100 percent of this shirt’s sales to Sandy relief too.

Simple and direct without having to humble-brag about your Sandy volunteering, proceeds from this shirt from the awesomely named Mythical Creature Butcher Shop go to the Mayor’s Fund to Advance New York City, which is providing storm relief.

Local designers/Long Island natives are selling this shirt to benefit Waves for Water, which is helping relief efforts in Long Beach, Rockaway and in New Jersey at Manasquan, Seaside, Ocean City and other areas. They’ve also got T shirts available with the same design.

This one is for the collector of obscure NYC esoteria. After the storm pummeled transit on the Rockaways, the MTA  shipped trains out to offer some shuttle service along the peninsula. They named it the H train, not for hurricane, or hepsters, but as tribute to the original name of the Rockaways shuttle. You can get it at the Transit Museum, which also now sells H train T shirts, magnets and pins. Proceeds go to the Graybeards, a Rockaway community group that was founded after the Sept. 11 attacks.

The NJ-based rock band went and designed a whole slew of merch just to help raise money to rebuild their home state’s walloped coastline. In addition to this touching tribute to the boardwalk Ferris wheel, the band also made a new line of Sandy relief T shirts showing the wheel and other East Coast strong gear. 100 percent of All the proceeds will be split between Rebuild Recover and Architecture For Humanity’s Rebuild Seaside Pier effort.

Asbury Park: The blue-collar home of Springsteen that became an avatar from the death and rebirth of the Jersey beach economy over the years. It made an impression on Pulitzer Prize-winning author Junot Diaz too. The Charleston, SC-based artist who made this 8×10 print is giving 50 percent to Sandy relief.

While it pains us to think of summers without a surfing safari that ends in Rockaway Taco or Rippers, you can remember the once (and future, we hope!) greatness of Rockaway with this 8.5 x 11 map made by a Brooklyn-based Etsy artist. 100 percent of the profits go to rebuilding the Rockaways.

These 12 NYC pictures both before and after Sandy from famous photographers were selected in collaboration between the Jen Bekman Project and Time magazines editors. Net proceeds go to six local charities including the Red Hook Initiative, Donors Choose and Safe Space. 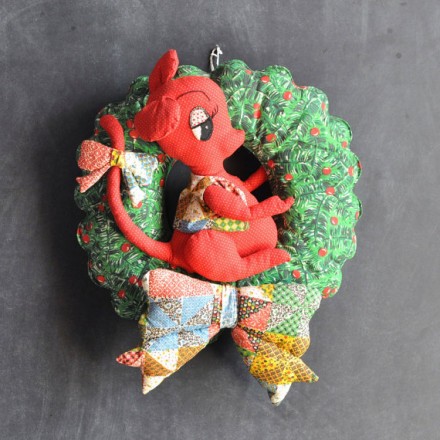 This thing looks like it was pulled directly from the Etsy recruiting catalog, but it is indeed a Sandy relief item. There’s only one left to be sold, and all the profits go to Sandy relief. 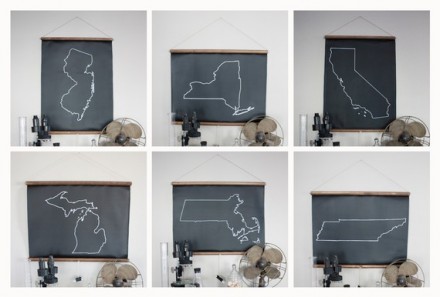 Keep track of your travels to storm-hit areas, recovery efforts or anything else you want to draw on this custom-made chalkboard map featuring the state of your choice permanently draw onto 18×24 chalkboard fabric. The Somerset, NJ-based artist is donating $20 from each sale to NJ relief funds.

Not the biggest ticket donation on the list, but it makes a good romantic gift with a cause. From each sale, $5 of this pretty brass charm necklace on Etsy goes to Sandy relief.

Err, this one may just be for you regular Brokelyn readers who just won some Powerballs, but Amanda Keidan is giving away 20 percent of sales from all of her jewelry (which ranges from $1,400 to $7,000) to Sandy relief if you mention “Sandy” in the order. So all things considered, that’s a pretty good chunk of money. Of course, a $7,500 gold cuff could also buy a lot of generators too.

A Brooklyn-based Etsy seller made this riff on the classic design when she was trapped in her apartment waiting out the storm. The bag is 100 percent cotton and machine washable. All proceeds go to Occupy Sandy. 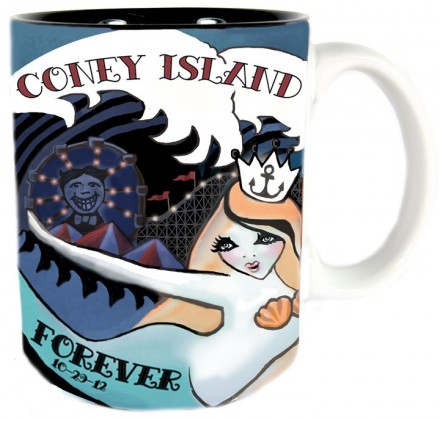 Seeing as Sandy pushed waters up to the roof of businesses on Coney Island, it’s safe to say it will take a while for everything to get back up to speed. Help out with this design from one of those businesses, clothing and souvenir shop Lola Star. Proceeds go to help other Coney businesses get back on their feet. The design is also available on T shirts and tote bags. 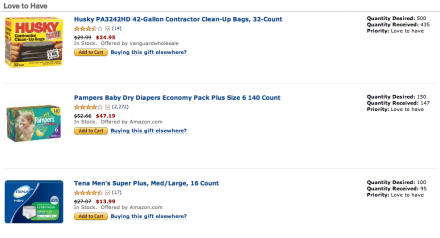 Why not give a gift in someone’s name directly to people in need? In a savvy move that is definitely one of the reasons people have been supporting Occupy Sandy over the Red Cross, the Occupiers have set up Amazon wedding registries for the most-needed items for its operating centers in Clinton Hill, Bay Ridge, Staten Island and NJ. See all the lists here. Occupy has given us a great way to watch your donation go to an actual tangible item instead of letting it get lost in bureaucratic red tape.

Sellers on Etsy are also offering a TON more items that benefit Sandy relief, and there are too many to list here. Browse the Sandy relief options here.

Know of others? Add them to the comments!

*Note: where possible, we listed which specific organizations the money is going toward; otherwise it is designated for general Sandy relief efforts. We chose reliable-looking vendors, but we weren’t able to vet all of them, so proceed with caution.